Captain Clarke leads from the front 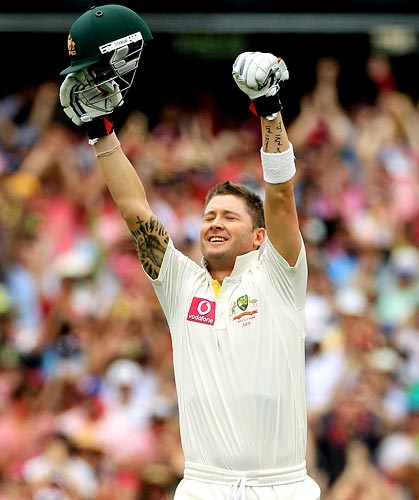 Michael Clarke scored only the 25th triple century in Test cricket before declaring Australia's first innings at 659 for four, a lead of 468.

India, despite a fine spell from paceman Ben Hilfenhaus, were 114-2 in their second innings at close of play on the third day, still trailing Australia by 354 runs.

Opener Gautam Gambhir (68) and Sachin Tendulkar, who was unbeaten on eight from 42 balls, will resume on Day 4. 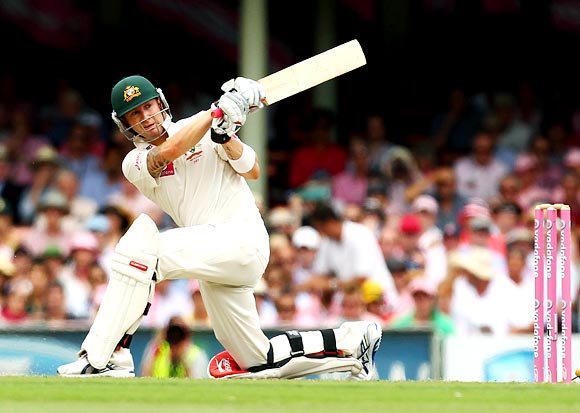 Clarke had already established the highest score in 100 Tests at the ground when he passed the 287 scored by England's Tip Foster in 1902-3 just before lunch.

The righthander flicked the ball through midwicket off the bowling of Ishant Sharma for the 37th four of his marathon innings to become the 21st cricketer to reach the milestone. 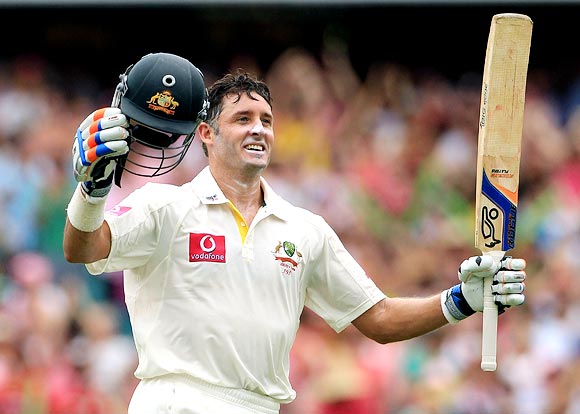 Michael Hussey also continued his recent good run with the bat as he cracked his 16th Test century.

The veteran left-hander, resuming on 55, was 111 at the lunch break, while skipper Clarke, overnight on 251 runs, was just seven runs short of his maiden triple century as Australia took the lunch at 583 for four.

The morning session once again belonged to the hosts as they scored 101 runs from 32 overs without losing any wickets. 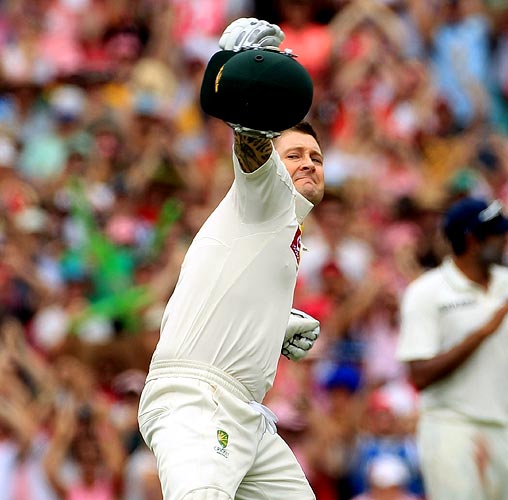 Clarke whipped off his helmet to acknowledge a standing ovation from the crowd at the Sydney Cricket Ground and pointed his bat towards the home dressing room.

The triple century came from 432 balls in 567 minutes and also included one six. 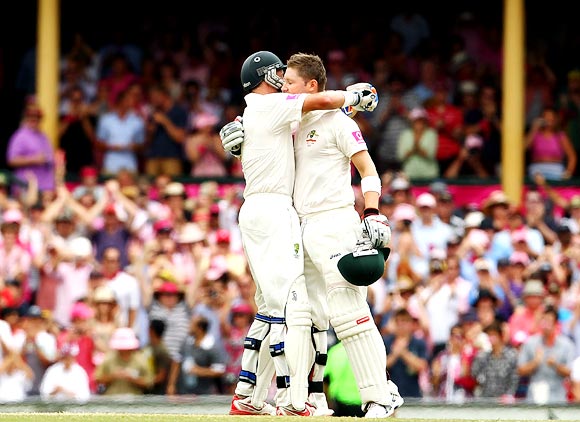 Hussey and his captain had put on 334 for the fifth wicket, eclipsing the previous highest partnership for Australia against India of 288, which Clarke set with Ricky Ponting on Wednesday. 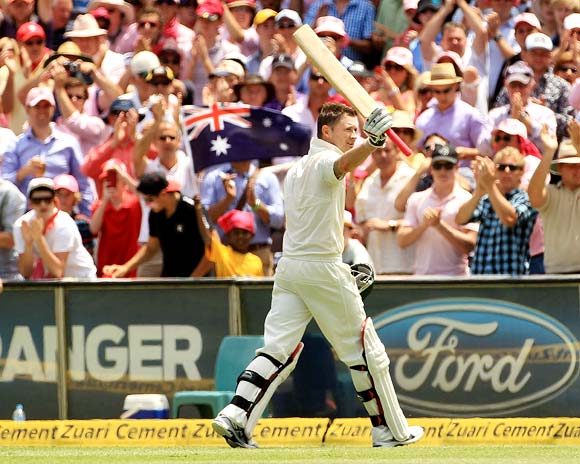 Clarke put team above personal glory as he declared the innings with his score on 329. He faced 478 balls and batted for 10 hours and 17 minutes when he waved Hussey off the pitch to another huge ovation from the crowd, keen to leave enough time to bowl India out.

Understandably tired after batting through Wednesday, Clarke took his time to find his batting rhythm but never looked troubled as Hussey kept the scoreboard ticking over at the other end. 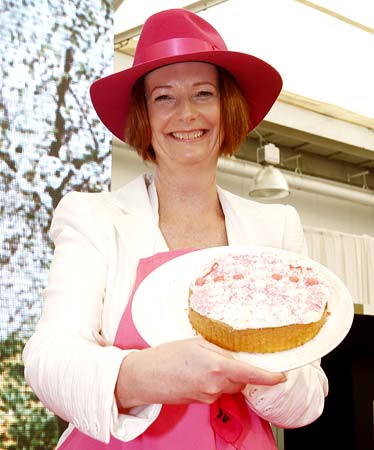 Australian Prime Minister Julia Gillard displays a cake she made at the Jane McGrath High Tea during day three.

For the fourth year in a row, the spectators and organisers, sported pink to support and raise money for the Jane McGrath Foundation to battle breast cancer.

Both teams also did their part by signing pink caps, which were handed to former Australia fast bowler Glenn McGrath to be auctioned later. 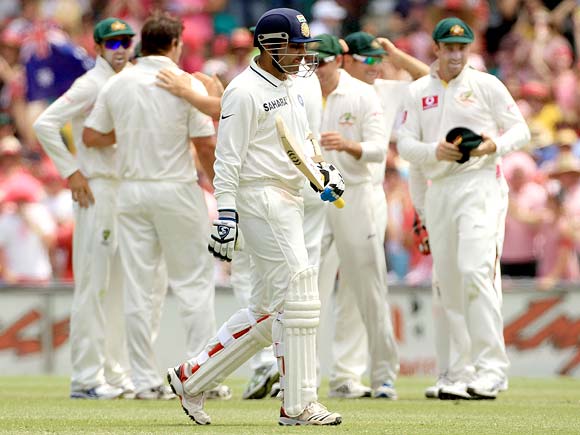 India's batsmen face a Herculean task to rescue the Test and keep alive their hopes of winning a first series in Australia but got off to a poor start when Virender Sehwag fell to Ben Hilfenhaus with just 18 runs on the board.

The big paceman swung a delivery across the opener, who slashed it towards David Warner at point and the Australian dived to his left for an athletic two-handed catch.

The embattled Gautam Gambhir, hit a quick 39, and Rahul Dravid, was unbeaten on seven at the tea break. 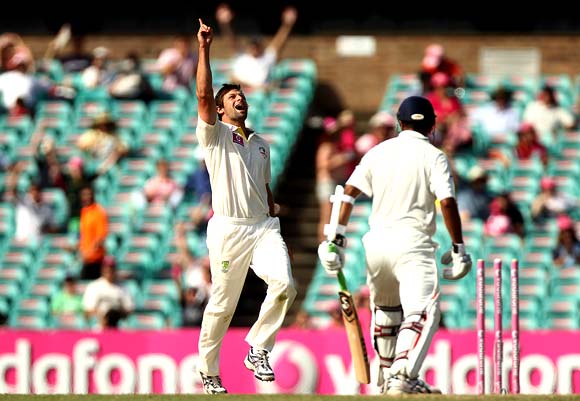 Hilfenhaus then returned to bowl Dravid through the gate for 29 with a beautiful delivery and he and James Pattinson ensured Gambhir and Tendulkar had anything but a comfortable passage to stumps.

Dravid came forward to an off-cutter from Hilfenhaus and left a little gap between his bat and pad. It was enough for the ball to sneak through and hit the top of the middle stump.

Dravid batted for 102 minutes and 73 balls for his 29 runs and hit six fours. He put on 72 runs for the second wicket with Gambhir. Gambhir returned back to form with a fluent knock of 68.

Gambhir and Tendulkar dropped anchor and were just intent to see through the day. Overs after overs passed without a run being added to the total.

Gambhir took a run after being run-less for 34 balls and Tendulkar went past his three runs through a streaky four only after defending 51 deliveries.

In the dying minutes of the game, Gambhir received a chance when he edged an easy catch towards the wicketkeeper but Brad Haddin just couldn't lay his hands to the edge. James Pattinson was the aggrieved bowler for Australia.

At close on the third day, India reached 114-2 with Gambhir (68) and Sachin Tendulkar, who had made eight from 42 balls.