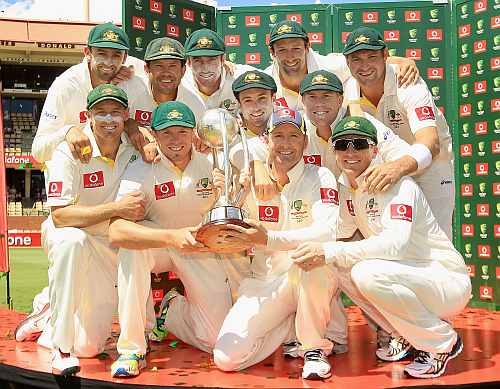 India slumped to their second successive overseas series whitewash after losing the fourth and final Test against Australia by a humiliating 298 runs at the Adelaide Oval.

Australia pocket the Test series 4-0 after having scored comprehensive wins in the previous three games. India, thus, suffered their eighth straight overseas defeat after having whitewashed 0-4 in England last year. 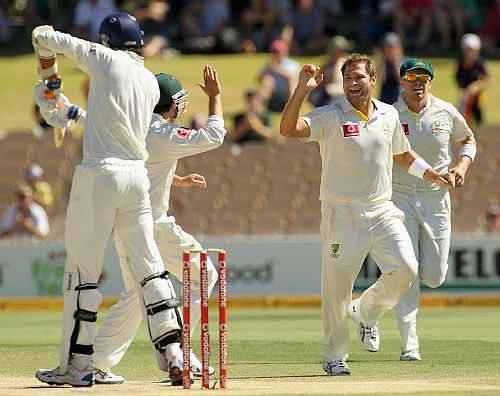 Resuming at 166 for six, the Indians lasted almost an hour and 13-odd overs during which they added 35 runs before being bowled out for 201, handing Australia a clean sweep in the series.

The sight of Indian tailenders prompted Australian captain Michael Clarke to start the proceedings with his pacers and they responded to his skipper's call by removing the two overnight batsmen Ishant Sharma (2) and Wriddhiman Saha (3) in the first three overs of the day.

Ishant was the first to depart, poking at a Ryan Harris delivery which wicketkeeper Brad Haddin had no problem in pouncing.

Next over, Saha followed suit in identical fashion, caught by Haddin off Peter Siddle.

Lyon accounts for Yadav's wicket to complete the rout 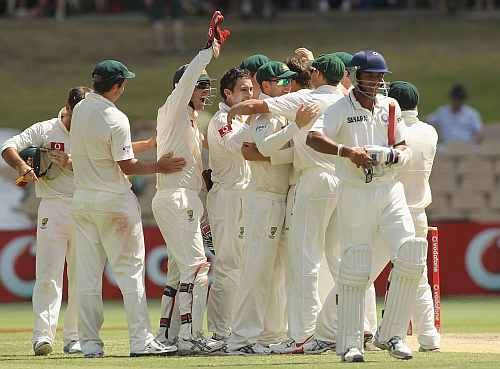 Image: Australian's celebrate after picking up the wicket of Umesh Yadav at the Adelaide Oval
Photographs: Getty Images

Zaheer, unlike his previous innings in the series, seemed determined to spent time at the crease rather than flashing at every delivery.

He batted for 18 balls from which he scored 15 runs with the help of four boundaries before Ben Hilfenhaus sent him packing.

Zaheer lobbed a simple catch to David Warner in the covers while trying to pull a short delivery off Hilfenhaus.

Umesh Yadav was the last wicket to fall, handing Haddin his third catch of the morning off Nathan Lyon's bowling.

Ravichandran Ashwin remained unbeaten for India on 15 which came off 31 balls.

Off-spinner Lyon turned out to be the best bowler for Australia, finishing with impressive figures of four for 63, while Harris picked up three wickets for 41 runs.