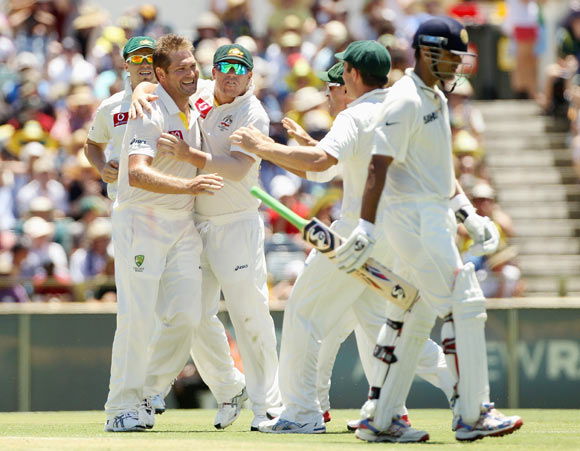 Australia thrashed India by an innings and 37 runs well inside three days in the third Test in Perth, making the visitors suffer their second successive overseas series defeat.

The win enabled the home team to regain the Border-Gavaskar Trophy. Australia took about 135 minutes to polish off the remaining six Indian wickets to take an invincible 3-0 lead in the four-match series.

It was the seventh successive loss abroad for India after the 4-0 whitewash by England last year. Overnight 88 for four, India fought back early in the morning session with Rahul Dravid (47) and Virat Kohli putting on an 84-run stand fourth-fifth wicket.

However, Dravid was then cleaned up by Ryan Harris, a dismissal that hastened India's downfall.

Harris brought the ball in from a length and Dravid, who has shown a tendency to neither go forward nor backwards at times, lost his leg stump as he made a last attempt to flick it.

This was the fifth time Dravid has been bowled in this series and eight times in his last ten innings.

He now has 54 such dismissals andhas overtaken Allan Border as the batsman who has been dismissed most times clean bowled. 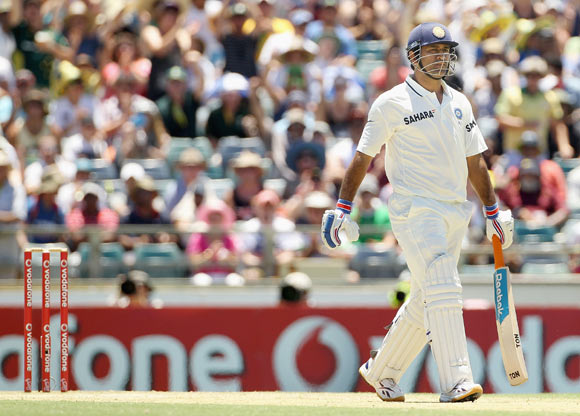 Captain MS Dhoni (2), continued with his wretched form in the series, playing forward to a Peter Siddle delivery and edging a low catch to Ricky Ponting in the second slip.

For someone who had led Team India to the memorable World Cup victory last April nobody knew he would put himself to test to pick between Test cricket and ODI so soon.

Barely 10 months after that famous win, Dhoni has already hinted that he might retire from Test by 2013 if he was to play in the 2015 cricket World Cup. His form with the bat suggests why.

Peter Siddle had match figures of six for 85 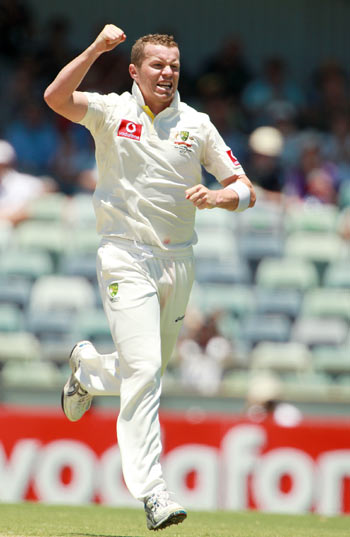 Peter Siddle impressed with the ball again, with his knack of picking up wickets.

He picked up three for 43 in the Indian second innings to go with his three for 42 in the first.

Having got MS Dhoni out before lunch, Siddle then took the final Indian wicket to fall, having Virat Kohli caught behind.

Hilfenhaus has so far picked up 23 wickets in the series 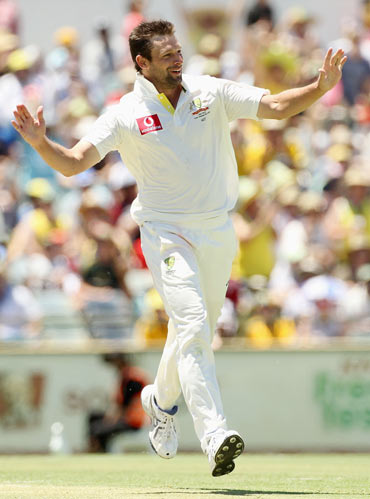 But it has been Ben Hilfenhaus who has been the architect-in-chief of the Indian capitulation in this series.

The 28-year-old, whose selection ahead of the series had been a debatable one, has responded in style picking up 23 wickets in the three Tests played.

The Indian subjugation unfolded quickly after lunch, in Hilfenhaus' 18th over, the 63rd of the Indian second innings.

Sensing his opportunity of a short ball, R Vinay Kumar went for a slash but the ball from Hilfenhaus was too quick for it and the resultant healthy edge was smartly snapped by Michael Clarke at first slip.

Zaheer Khan was out for first ball duck as Hilfenhaus directed a short ball at the Indian left-arm paceman who could only hang his bat.

The edge flew and eluded a leaping wicketkeeper Brad Haddin but Michael Clarke was alert behind him at first slip and picked up his second straight catch.

Ishant Sharma played out the hat-trick ball but two deliveries later, popped a catch at forward short leg where Ed Cowan made no mistake. 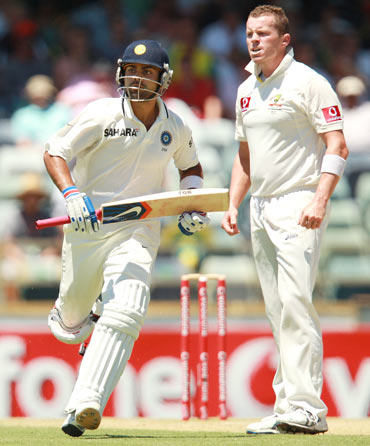 The highly-rated Indian batting line-up failed once again with the sole exception of Virat Kohli, who slammed an impressive 75, as the visitors were shot out for 171, around 15 minutes after the lunch break on the bouncy WACA pitch.

Kohli batted for 191 minutes and faced 136 balls for his 75 runs, slamming nine fours.

Kohli was impressive in his knock, his third Test fifty, as he showed the determination to stay put at the crease under difficult circumstances.

In fact when last man Umesh Yadav pushed a delivery at mid-on but Kohli refused to exchange strikes, hoping to gather some quick runs at the other end.

It was not to be as the second ball from Peter Siddle was edged behind and Brad Haddin did not let the chance go out of his gloves to trigger Australian celebrations. 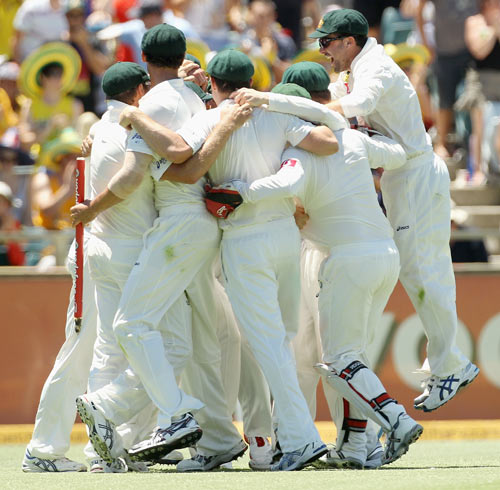 The hosts just took about 135 minutes to polish off the remaining six Indian wickets to take an invincible 3-0 lead in the four-match series.

It was the seventh successive loss abroad for India after the 4-0 whitewash by England last year.

The Indian second innings total was just 10 runs more than the 161 in their first essay, in reply to Australia's first innings tally of 369.

In the first innings, India had lost their final six wickets for 30 runs.

In the second, they lost their final four wickets off only seven balls without any addition to the total.The two sides now move to Adelaide for the fourth and final Test which starts on January 24.