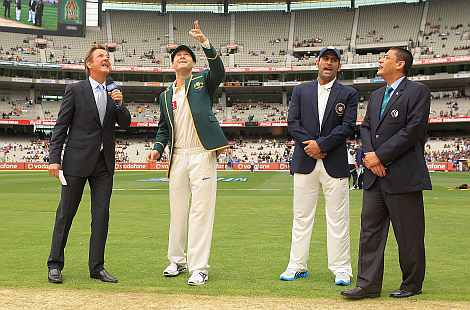 Image: Michael Clarke and Mahendra Singh Dhoni during the toss ahead of the start of the first Test match
Photographs: Getty Images

Australia skipper Michael Clarke won the toss and elected to bat first against India in the first Test in Melbourne, on Monday.

David Warner and Cowan ensured that Aussies were off to a good start after they decided to bat first.

Warner hit the first boundary for Australia -- a streaky one to get the ball rolling. The left-hander then got stuck into Yadav in his third over, when he hit him for a boundary and a six for get some momentum for the hosts. 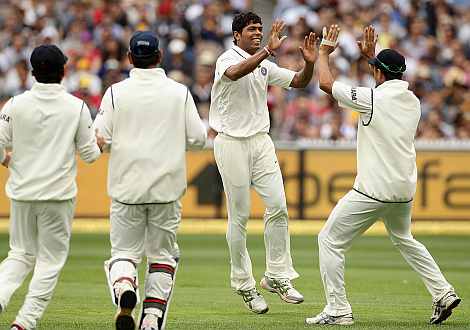 At the end of the 13th over, the skies opened up as the players walked off the pitch.

The resumption was almost as swift and India's retribution almost instant as Yadav removed Warner.

Waner went in for a hook shot, but mistimed it completely as the ball ballooned up in the air for an easy take for Mahendra Singh Dhoni behind the stumps.

Marsh out for a duck 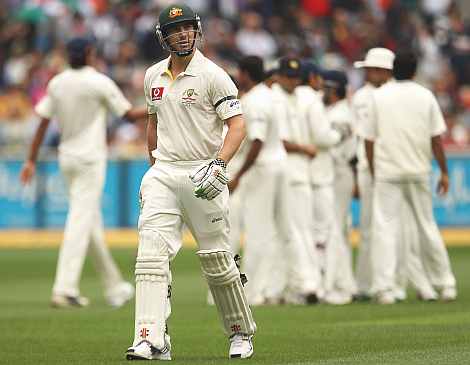 Warner's dismissal brought in Shaun Marsh in the middle but he departed soon as he hit one straight to gully to give India the second breakthrough in space of seven balls.

Ponting and Cowan then weathered the storm to take Australia 68-2 at lunch.

Ponting off to a nervous start 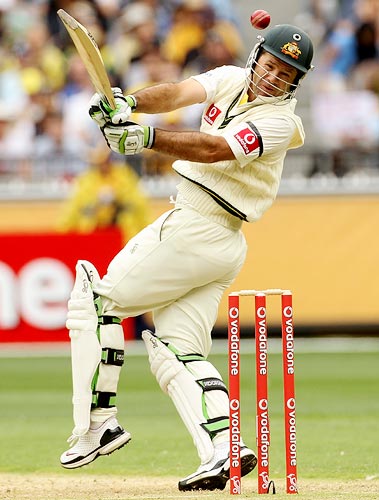 Ricky Ponting, battling poor form and needing runs to stay in the side, was immediately under pressure, and was softened up in his second ball off Yadav when he miscued a pull and had the ball crashing into the grill of his helmet.

The 37-year-old recovered, however, belting a defiant pull shot behind square for four off Zaheer before he and Cowan watchfully saw out the remaining overs in the first session. 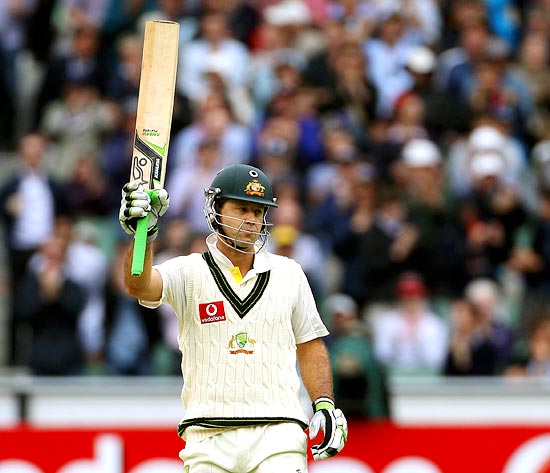 Ponting took on the Indian bowling attack after the lunch break with a fluent half-century.

The veteran batsman brought up his fifty from 67 balls with an attempted slog sweep over midwicket off R Ashwin in the 38th over, which fetched him three runs. 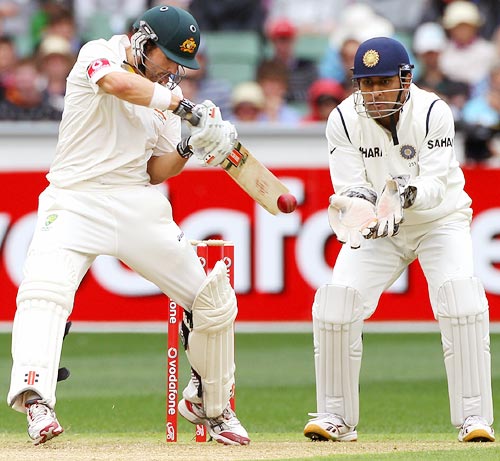 The 29-year-old Cowan, who replaced the axed Phillip Hughes as opener after enjoying career-best form in the domestic competition, combined for a 113-run stand with Ponting to push Australia to 170-3 at tea. 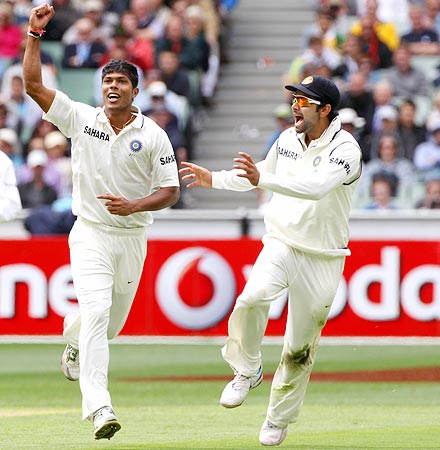 Image: Umesh Yadav (left) celebrates with team-mate Virat Kohli after getting the wicket of Ricky Ponting

Having threatened to bat through the session, Ponting was tempted on 62 into poking at a stinging Yadav delivery that bounced savagely and glanced the bat to give VVS Laxman a simple catch in the slips.

Ponting's dismissal four overs before lunch was Yadav's third wicket and just rewards after he repeatedly asked questions of the former Australia captain with his pace and varying bounce on the green-tinged wicket. 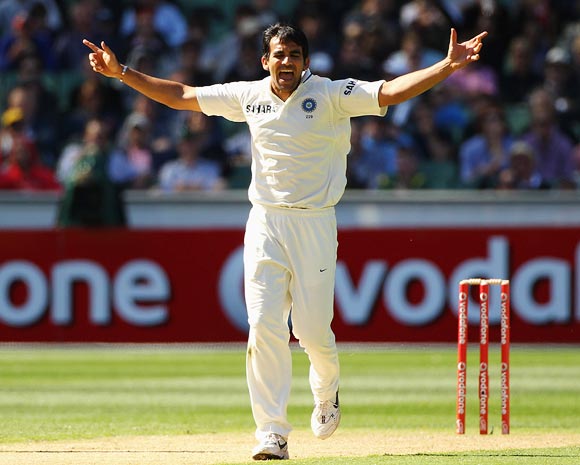 After a poor start, Zaheer bounced back in style with two quick wickets.

Australia captain Michael Clarke hit a breezy 31 before he inside edged an incoming delivery from Zaheer and was bowled. 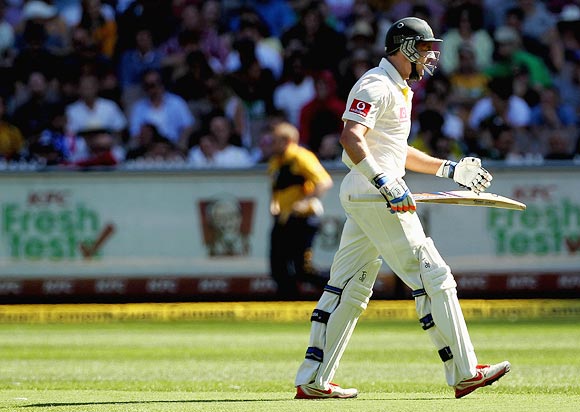 Michael Hussey, needing some runs to secure his place in the team, was out first ball.

Zaheer bowled a quick, rising delivery that got Hussey caught behind to claim two wickets in as many deliveries.

However, replays indicated that the ball had missed Hussey's bat and he was unlucky to be ruled out.

Ashwin gets the wicket of Cowan 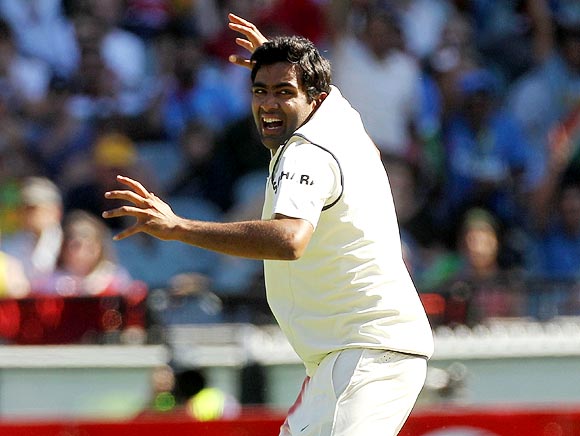 Ravichandran Ashwin then made it worse for Australia by claiming the wicket of Ed Cowan.

The left-hander, who made 68 from 177 balls, tried to cut a short delivery but ended up being caught behind by Dhoni.

Those three quick wickets saw Australia lose their position of strength to slip from 205 for three to 214 for six in the space of three overs.