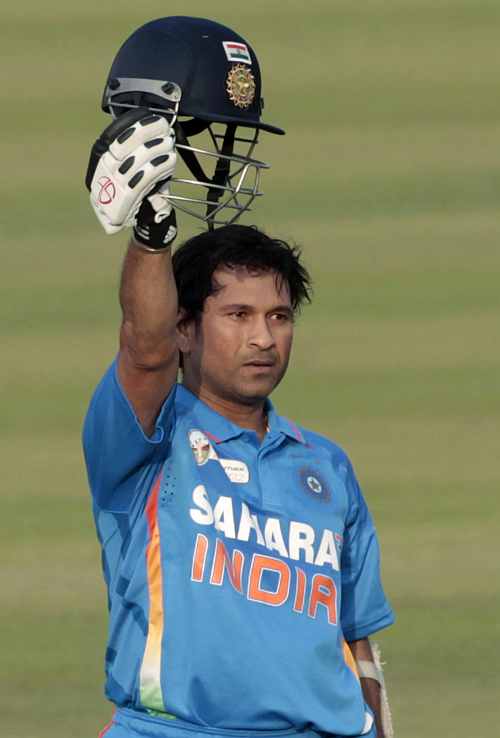 Sachin Tendulkar may have had to wait close to a year to achieve the historic feat of scoring 100 international centuries but the delay was certainly not due to any lack of effort, with the star batsman giving himself a mark of "100 out of 100" in terms of effort and commitment.

"There is one thing I can put my hand up and say that I am 100 percent sure about my effort and commitment. If they were lacking, then there would have been a question mark but in those areas in my book, I scored a 100 out of 100," Tendulkar told reporters.

The 38-year-old batsman said he was sure that the 100th century would come and it was just a matter of not taking things for granted.

"It is all about belief. I knew it will come but it was important that you don't take things for granted and keep working the way you usually do. Scoring runs and not scoring runs will always come across and it is part of a career and you can experience that when you have played long enough.

"I was pretty confident about what I was doing and the technique was right and I had the right people around me and I want to thank them," the legendary batsman said.

'I have to admit I was relieved' 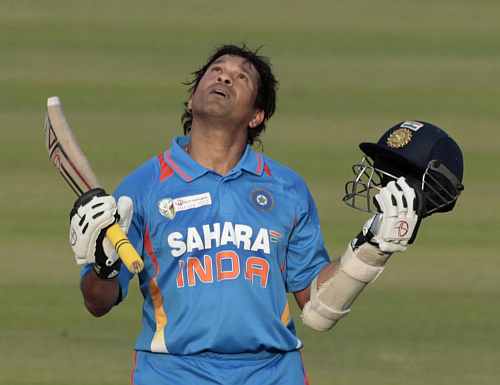 Tendulkar said that at one level, he could find a connect with Roger Federer considering the his wait for the World Cup was just like tennis legend's wait for his elusive French Open title.

"I don't know obviously what Federer had gone through but I am sure it was tough. I would not compare my 100th century with the French Open, rather it would be the World Cup. I had to wait 22 years and that wait was much longer."

After completing his century, it was a sense of relief for Tendulkar for achieving a feat that could remain unconquered for years to come.

"I have to admit I was relieved. This is now out of the way and I can start a new chapter. It was possibly the toughest phase of my life. There was so much hype and attention about the 100th hundred.

"I thought I possibly batted the best in my life, got close in a couple of games but I couldn't achieve that. There are no specific reasons for that. At times I was luckless. Sometimes you need to have luck on your side to cross the final hurdle," Tendulkar said.

'It has been a tough journey' 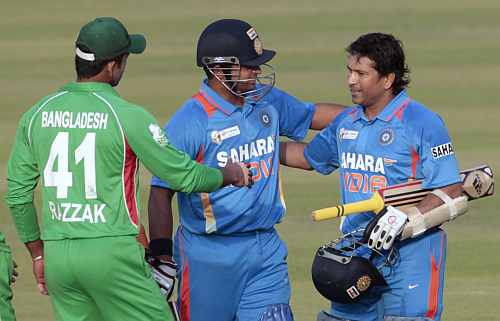 The iconic batsman said that he wished he had "somebody to guide him" about the anticipation and subsequent disappointment that was attached each time he failed to get past the three-figure mark in recent times.

"My family and friends stood right behind me, with me and I could speak my mind with them. I could explain my frustrations to them. I could express my joy with them, the happiness that I couldn't score a hundred but I still could bat well and that is a positive thing and that I am doing something important for the team."

"In Delhi, I went in to bat in the second innings and it was a critical phase and we won that game but people were only talking about how I missed my hundred. Which ever be the manner, they were disappointed.

"So that is something which was always spoken about and it is something that a sportsman doesn't want. He just wants to enjoy his game and the success of having done well for the team and also doing well."

'Chennai hundred is really close to my heart' 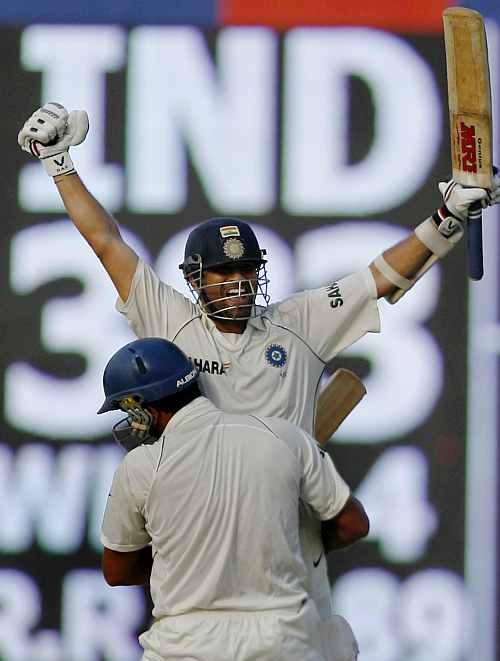 Asked about some of his favourite centuries, he doesn't take much time to answer "Perth." He had scored 114 at Perth in 1992.

"Something that means a lot to me is the hundred at Chennai (against England) in 2008. That was really really important to me because of what had happened before that (26/11 terror attacks in Mumbai). Then, the first 100 (at Manchester), 136 in Chennai (against Pakistan) and 241 against Australia at Sydney."

Tendulkar cited the innings of 200 not out in the ODI against South Africa at Gwalior as one played with tremendous pain.

"A specific innings that comes to my mind is when I got that double century (against South Africa) at Gwalior. I remember before that game I was lying on the physio's table, getting various treatments and my whole body was in trouble." 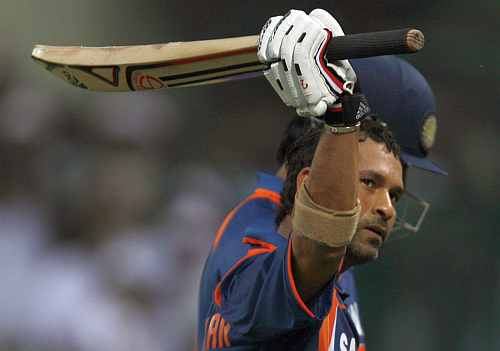 Tendulkar recollected how he was completely exhausted after that innings.

"I was completely exhausted. I couldn't even stand on that field, I was that exhausted physically and mentally. To deal with injuries is not easy and at my age, it becomes even more difficult and that was the case even before I played that game. I went to the ground and forgot all about that.

"When you are focussed, you are willing to find a path among all those things and reach a destination of winning that match.

"It happens to everyone and sometimes you go through that more than the other guys," he added.

'Important that Sara and Arjun lead a normal childhood' 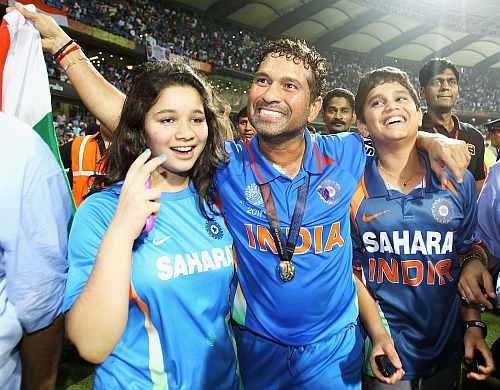 Tendulkar also talked about his kids Sara and Arjun, saying it was important that they lead a normal childhood.

"With Arjun and Sara, it's important that they lead a normal childhood and not surrounded by the media all the time. It's alright to get that when he is matured enough to handle that.

"But right now, he is madly in love with cricket and with all this attention and pressure it shouldn't be such that he starts hating all this. I feel it has to grow on him and there is time and occasion for him to get that. He should have the freedom to express himself as a person," he said.

His highest Test score of 248 is incidentally against Bangladesh and Tendulkar recalled a funny anecdote from that particular innings.

"Possibly the funniest incident of my life took place in that match. I was batting with Anil and while taking a run and passing him, I told him "keep an eye on the second run." And while taking the second one, I saw that the throw was good and I stopped and Anil ran, and the keeper missed.

"I returned to my crease but because I was going for the second run, Anil kept running. Twice, we actually ran in the same direction and on at least three occasions, we were about to get out but we did not and we had a good laugh." 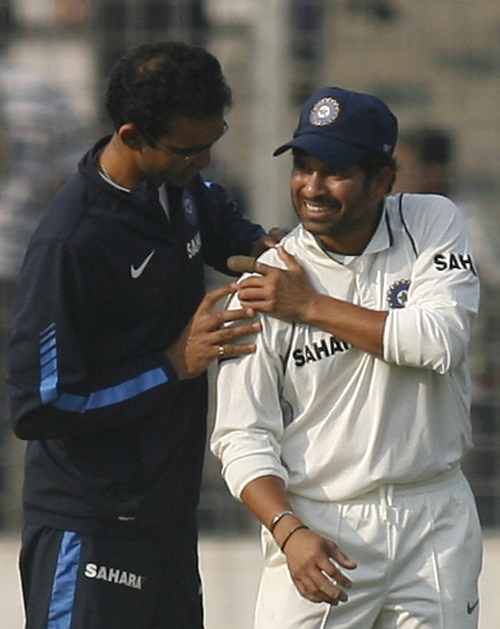 A team man to the core, Sachin did not forget to thank the support staff (physios, masseurs, trainers) who had a role in keeping him fit.

"Without the physios and masseurs, life would be really difficult. I like to thank all the phsyios, doctors, the masseurs who helped me, when I was in desperate need.

"There are a lot of things which happen outside the field and that helps you prepare for the match. I like to thank them. What ever happens behind the scenes is never discussed but they are equally a part of my success", he added.