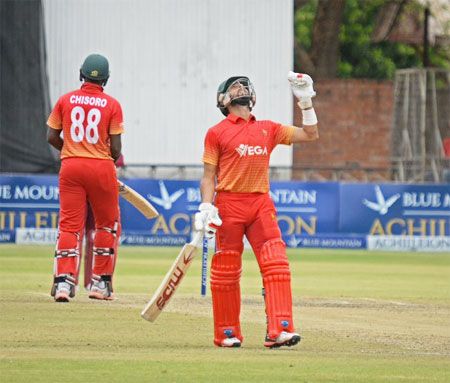 Zimbabwe beat the West Indies by five runs on the Duckworth-Lewis method in Bulawayo on Friday to book a place in Sunday’s final of the triangular one-day international tournament against Sri Lanka.

Rain ended the last round-robin match early after Zimbabwe fought back from a dismal start to post a competitive score and pegged the Windies back to 124 for five in the 28th over when play was halted.

Sikander Raza and Tendai Chisoro shared a record ninth-wicket stand of 84 to lift Zimbabwe to 218 for eight off 49 overs after rain had interrupted the early stages of the match.

Zimbabwe had been reeling at 63 for five but Raza led a revival and finished 76 not out while number 10 Chisoro made 42 not out off 35 balls. Chisoro removed both West Indian openers in his first two overs before Jonathan Carter (43 not out) led a fight back, thwarted by heavy showers, and ultimately narrowly behind in the run rate.

Sri Lanka’s close-fought win over the West Indies on Wednesday secured their place in the final.

Image: Zimbabwe's Sikander Raza celebrates on completing his half-century during the One-dayer against West Indies in Bulawayo on Friday