Your next star might come from public ground: HC tells BCCI 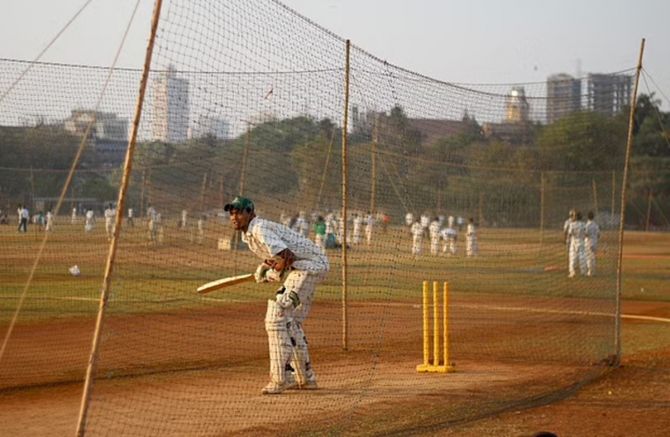 IMAGE: The court also said cricket associations and the Brihanmumbai Municipal Corporation (BMC) could not cite lack of funds as a reason for not providing basic facilities. Photograph: PTI

"Your next big star might come from a public ground," the Bombay High Court told the BCCI, the Maharashtra Cricket Association (MCA) and state authorities on Monday, while holding that these bodies must provide basic facilities such as toilets, drinking water and medical assistance at public grounds.

A bench of Justices Anil Menon and MS Karnik said several children as well as adults played cricket and other sports on public grounds across the state. Most of these grounds, whether under the control of civic bodies or cricket associations, were lacking basic facilities.

This despite the fact that the internal memorandums of both the Board of Control for Cricket in India (BCCI) and the MCA mandated that basic facilities be provided at training camps, or such spots where a game of cricket was on, to "encourage cricket."

Tiwari, who appeared as a party in person (he represented himself in the case), told the HC that he himself was a professional cricket player and had participated in various state and district level tournaments.

"When one books a public ground for practice, one is required to pay a fee to the civic body or to the sports association under whose jurisdiction the ground falls," he said.

"But, most of these grounds, even where professional cricket camps are organised, do not have access to clean drinking water or to a toilet that can be used by players," he said.

The MCA and the BCCI counsels, however, told the HC that most public grounds in the state were under the jurisdiction of municipal bodies.

They further said even in cases where they organised camps or practice matches, the permission to provide basic facilities was often denied by civic or state authorities concerned

But, the HC bench said such a statement was not acceptable.

"Have you ever applied and then have been denied permission? File an affidavit," the HC told the MCA and the BCCI.

"This is not an adversarial litigation, for you might get your next star from a public ground. So many bright children are playing on public grounds," the bench said.

The court also said cricket associations and the Brihanmumbai Municipal Corporation (BMC) could not cite lack of funds as a reason for not providing basic facilities.

"These are the last organisations that can say they do not have funds," the HC said.

"Sports have to be encouraged, not just for children but for adults as well," it said.

The HC said the Maharashtra government, BMC, MCA and the BCCI must file their respective affidavits within two weeks, detailing how many grounds were under their jurisdiction and what facilities were made available there.