You can't coach different teams in the same way: Dravid

'You can't say that everything I did at the Under-19 level I will do here. That will not be the way I would go about things. For me as well, it is an opportunity to learn and get to know the players.'

IMAGE: India coach Rahul Dravid, right, and Shreyas Iyer during a practice session ahead of the first T20 International against New Zealand, in Jaipur. Photograph: BCCI/Twitter

Aware that guiding an age-group outfit is vastly different from helming a ruthlessly result-oriented international outfit, India's new head coach Rahul Dravid wants to strike a fine balance between winning every game and building a team for the future.

On the eve of the New Zealand T20 Internationals, Dravid admitted he will have to think long-term, but also focus on ensuring that the team is on winning ways.

"You can't coach different teams in the same way. Certain principles of coaching will never change. But, of course, the teams that you coach, they come with a unique set of challenges, unique set of requirements," said Dravid, on Tuesday.

"You can't say that everything I did at the Under-19 level I will do here. That will not be the way I would go about things. For me as well, it is an opportunity to learn and get to know the players.

"Your responsibility as a support staff is to mould yourself to be able to get the best out of the players... and that's my philosophy," added Dravid, who also worked on the younger generation of players as NCA chief.

Winning is not the end goal at the junior level, but at the senior level the most-followed cricket team is expected to win every game and Dravid acknowledges that.

He will expect to achieve what his predecessor, Ravi Shastri, couldn't: guide the team to an ICC title.

"You have to strike that balance," said Dravid, when asked about the long and short-term goals.

"Of course, we will have to win every single game that we play for India, but you cannot not think about the longer-term picture as well. Even in terms of the bubble fatigue or the situation we are in now.

"You know we will think about the players' long-term careers and futures as well and keep that in mind and not prioritize their well-being at any stage over, for sort of short-term results." 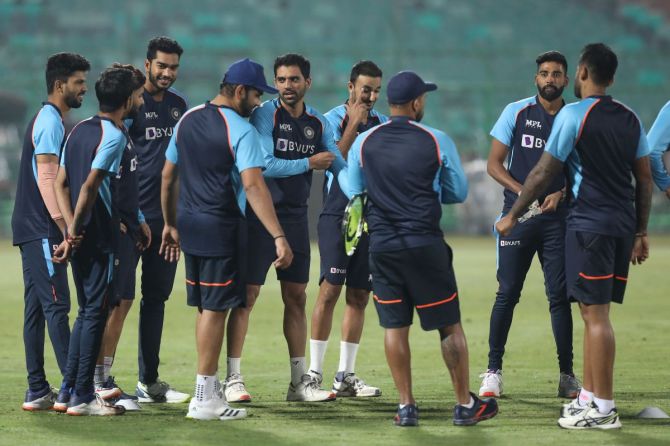 While winning is important, it is equally needed to keep an eye on building a solid core team looking at the future, said Dravid.

"So it's a combination of both. You have to win now, but you also have to keep one eye to the future.

"Thinking long term and thinking about what's in the future certainly is my job as a coach, and that won't change irrespective of whichever team you're coaching," added Dravid, referring to the T20 World Cup next year, 2023 ODI World Cup at home and ongoing World Test Championship.

Talking about workload management, which has gained significance in COVID times, he said the think-tank is not looking different teams for different formats yet but players, especially all formats ones, have to be given adequate time to rest and recover from bubble fatigue.

"We need to recognise these are challenging times for people, for players, and especially for those guys who are expected to play all the formats of the game.

"There may be an odd series, as we are already seeing with some of the selections that we might not be able to play every single player who plays all the formats of the game in every single game, but I think we need to just accept that as reality." 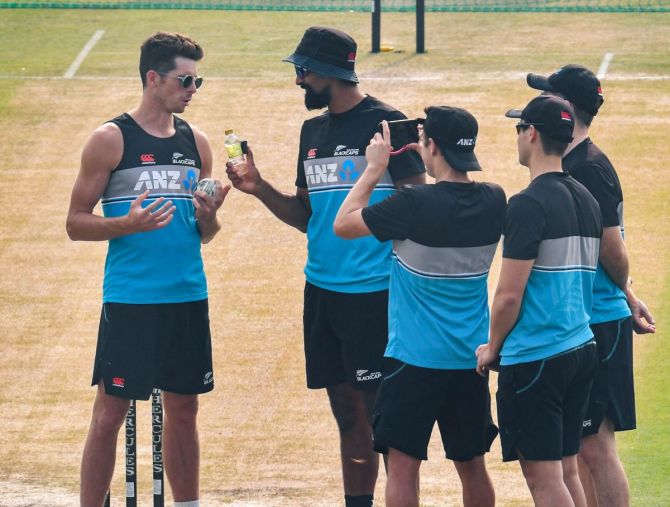 IMAGE: New Zealand's players during a practice session ahead of the first T20I, in Jaipur. Photograph: PTI

Dravid cited the example of New Zealand's Kane Williamson, who has been rested for the T20s against India to come back fresh for the Test series.

India's ODI and Test captain Virat Kohli too has been rested for the T20Is and will be back only for the second and final Test.

"So much cricket is being played. We have to manage players. Even in football, the players are not able to play all games.

"We will address it case by case. It is a balancing act. We will need to do and work towards so that everyone is fit and ready for the big tournaments. It is a challenge for all teams in world cricket at the moment."

He also made it clear that no format will get preference over the other and initially his initially his role will be to "sit back and watch and observe and then step in as and when required".

"So there are three events (WTC, World T20, ODI World Cup in the next two years) and we need to prepare for those events and, as far as vision is concerned, it's just about us looking to improve constantly.

"Everyday we keep getting better as players and as people, and we should be fine."