You are way too young and energetic to retire: PM Modi to Raina

'Your fielding was exemplary and inspiring. Some of the best catches in recent international cricket have your distinctive imprint.' 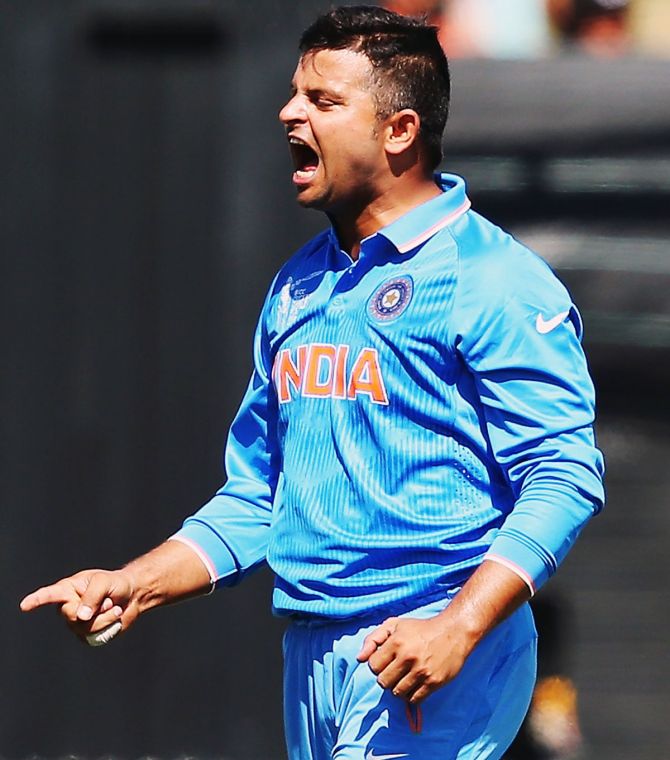 Prime Minister Narendra Modi distinctly remembers Suresh Raina's elegant cover drives during the epic 2011 World Cup quarter-final against Australia in Ahmedabad, something that, he feels, the all-rounder's fans will miss after he followed Mahendra Singh Dhoni into international retirement.

The 33-year-old Raina, a member of the 2011 World Cup winning India team, announced his retirement on August 15, minutes after Dhoni decided to call it quits internationally. The two players, who are close friends as well, will turn up for Chennai Super Kings in the IPL, starting next month.

"I do not want to use the word 'retirement' because you are too young and energetic to 'retire'," PM Modi, who also wrote a letter of appreciation to Dhoni, said in a two-page note to Raina, which he posted on his Twitter page on Friday.

"During your cricketing career, you sometimes faced setbacks including injuries but every time you overcame those challenges, thanks to your tenacity," he said.

Raina, on his part, thanked the Prime Minister.

"When we play, we give our blood & sweat for the nation. No better appreciation than being loved by the people of this country and even more by the country's PM. Thank you @narendramodi ji for your words of appreciation & best wishes. I accept them with gratitude. Jai Hind," the cricketer tweeted.

In the letter, Modi recollected how much he enjoyed Raina's most famous innings of 34 not out in a tricky run-chase against a formidable Australia in the 2011 World Cup quarter-final at Motera.

"India can never forget your inspiring role during the 2011 World Cup especially during the later matches. I saw you live in action at the Motera Stadium in Ahmedabad, during the Quarter Final against Australia. Your anchoring innings had a big role to play in our team's victory.

"I can confidently say that most fans will miss your elegant cover drives, one which I was lucky to witness that day," said the PM, who was back then the Chief Minister of Gujarat.

The PM also described Raina as the perfect team-man who enjoyed others' successes.

"...Suresh Raina will always be synonymous with team spirit. You played not for personal glory but for the glory of your team and the glory of India.

"Your enthusiasm on the field was infectious and we could all witness that you would be among the first and most animated players to celebrate the fall of opposing team's wicket," the PM said.

A bonafide IPL legend, Raina was praised by the Prime Minister for his prowess in the T20 format.

"As a batsman, you especially distinguished yourself across all mediums and particularly in the newest form of the game, the T20 cricket. This is not an easy format.

"In tune with our times, it requires quick fixes in double quick time. Again your promptness and speed were assets for this form," Modi said, lavishing praise on the IPL's most prolific batsman.

His sharp fielding was also acknowledged in the Prime Minister's appreciation letter.

"Your fielding was exemplary and inspiring. Some of the best catches in recent international cricket have your distinctive imprint. It would take days to count the number of runs you saved with your alertness on the field."

The PM also praised Raina for his participation in social initiatives like 'Swachh Bharat Abhiyan' and the cause of women's empowerment.

"I am glad you are attached to India's cultural roots and proud of deepening youth's connect with our glorious ethos as well as value systems," Modi said.

"I am confident you will have an equally fruitful and successful innings in whatever you wish to pursue in times to come." 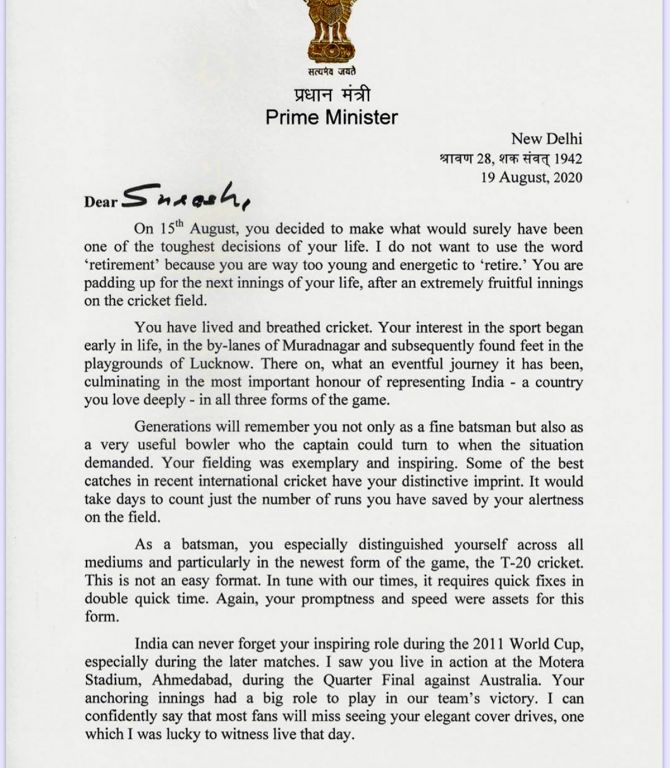