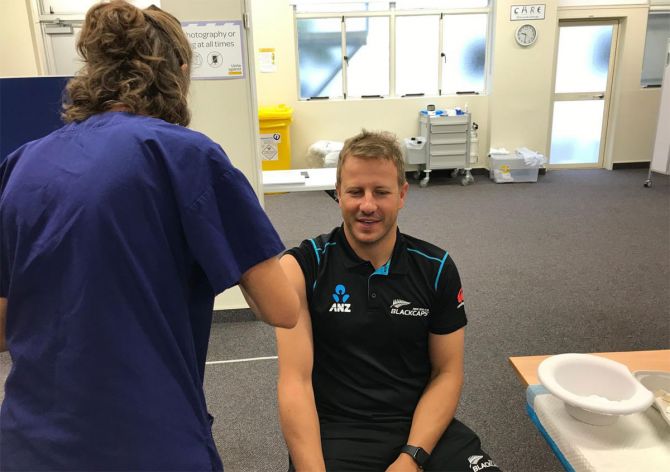 New Zealand fast bowler Neil Wagner feels the upcoming World Test Championship (WTC) final against India is like a World Cup title clash for him as he has never played a white-ball game for his country.

The inaugural WTC final is scheduled to be held in Southampton from June 18-22.

"Yeah, it is like a World Cup final for me. The biggest disappointment, I guess, in my career is that I've never really played a white-ball game for New Zealand or never been able to crack into the T20 or the one-day game," Wagner was quoted as saying in ESPNcricinfo.

"That ship has probably sailed now and I don't think the opportunity will ever come. For me now, it's about putting all my focus and energy into Test cricket and to be able to play in a World Test Championship final is like a World Cup for me," the 35-year-old added.

In March, India's leading off-spinner Ravichandran Ashwin spoke on similar lines, saying the WTC final will be like a World Cup final for a lot of players who have not often featured in limited overs cricket.

The New Zealanders are already in England, preparing for a two-match Test series against the hosts and though he is excitedly looking forward to play in the WTC final, Wagner said he would not like to let the occasion get the better of him.

"I know this final is the first and there isn't a lot of history around it, but it's the start of something that's pretty big."

"To play in a one-off Test final against India - one of the best teams in the world, if not the best team in the world - to be able to test yourself against the best on the highest and biggest stage, that's what it's about."

"It's extremely exciting, but I don't want to think too far ahead. Don't want to let the occasion get to you, just treat it like another Test match and do the same things you do. It's definitely going to be a special occasion. That's for sure," the Kiwi said.

Wagner battled through the pain of two broken toes in the first Test against Pakistan last December, playing an instrumental role in a memorable win for the home team at Bay Oval in Mount Maunganui.

He needed pain-killing injections during the Test, which the hosts won by 101 runs, after he was struck on the foot while batting on the second day.

"Yeah, it's a tough one. (It was) sort of in the moment and I guess adrenaline and playing for the team -- wearing the black cap is the ultimate drive and it obviously motivates you to go through that."

"It's (also) just everyone else around you encouraging you to do something like that, and trying to bite through as much pain as I could to try and deliver a job. Luckily it came off," Wagner, who is a bit scared of needles, said.

If his heroics at Bay Oval was any evidence, Wagner has a penchant to deliver in trying conditions, and he said he prides himself in playing a role when the going gets tough.

"Test cricket is tough and it's never easy playing in different parts of the world, where it can be challenging."

"You get to test your skills and ability against the best players in the toughest situations. That's where you want to stand up and make some sort of impact, and I pride myself in playing a role when things are tough. I want to put my hand up and have the ball in my hand," he said.