'It was probably the toughest period of cricket I've been a part of, in terms of watching.' 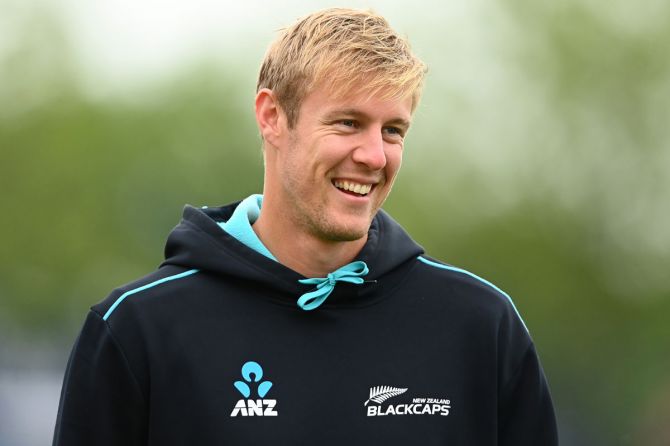 IMAGE: Kyle Jamieson, who was named the man of the match for his seven wickets in the final, revealed he felt nervous while watching the action from the dressing room during New Zealand's run chase on the final day. Photograph: Alex Davidson/Getty Images

The tension and nervousness caused during New Zealand's run chase on the final day of the ICC Word Test Championship final against India forced their star pacer Kyle Jamieson to hide inside the bathroom.

Jamieson, who was named the man of the match for his seven wickets in the final, felt nervous while watching the action from the dressing room.

"It was probably the toughest period of cricket I've been a part of, in terms of watching," Jamieson told Country Sport Breakfast on Gold AM.

"We were sitting inside and actually watching on TV. There was a bit of a delay but it seemed like every ball the Indian crowd was up and about and I was like 'jeez it's a wicket' or something like that, but it turned out it was just a block or a single."

Eventually, captain Kane Williamson and Ross Taylor got the team home rather comfortably while chasing 139 for a win.

"It was pretty tough to watch. I actually tried to at times to go to the bathroom where there was no noise to just get away from it for a while because it was quite nerve-racking.

"But it was nice to have Kane and Ross out there, two of our greatest ever batters really to calm the nerves and finish the job the way they did," said the lanky pacer.

Jamieson did not get enough time to celebrated as he was back in the field with 48 hours of the final, this time for his county side Surrey.

"It was a quick turnaround. I think within 48 hours I was back on the park playing T20 for Surrey. It's kind of the life we live a little bit. But it's nice to stay on and to experience county cricket for the next few weeks.

"It was certainly tough to say goodbye to those guys (NZ teammates). Coming off a high of what we just experienced and that moment we all enjoyed together, to go and say goodbye was quite tough."

Jamieson had India and his skipper at Royal Challengers Bangalore Virat Kohli dismissed twice in the final.

The pacer is feeling a little bit homesick after being away for close to three months.

"It's been about three months and will be about just over four months by the time I get out of MIQ (managed isolation and quarantine). It's been a long time and I've certainly loved my time at home. So it's been tough at times but I guess it's been the environment we're in.

"Look, I'm pretty fortunate to be able to still have our jobs and to be able to go around the world and work. I'm pretty grateful for that but I'm looking forward to getting home in a few weeks' time."