When Stokes nearly gave up cricket... 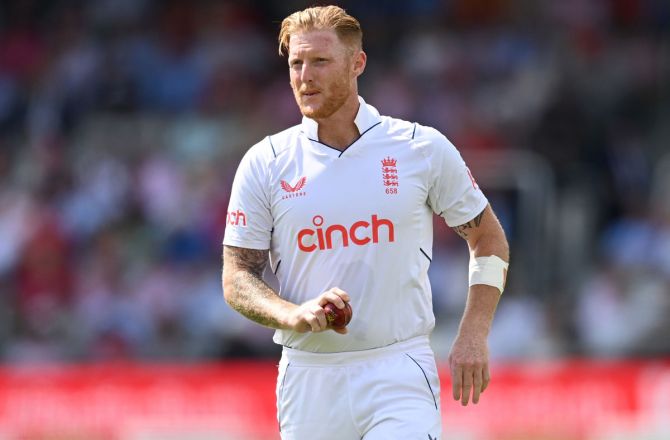 IMAGE: Ben Stokes said he felt deep resentment towards cricket when he took a break from the sport last year because he had been unable to visit his dying father as much as he wanted. Photograph: Gareth Copley/Getty Images

England Test captain Ben Stokes on Tuesday said he had feared he might not play again after taking an extended break from cricket last year to focus on his well-being.

Stokes decided to prioritise his mental health after suffering from a series of panic attacks following the death of his father due to brain cancer almost two years ago.

Speaking about his state of mind prior to taking the break, Stokes told the BBC: "It wasn't over two weeks or a couple of months. It built up over a long, long time, maybe even like three or four years.

"It was like I had a glass bottle I kept on throwing my emotions into. Eventually, it got too full and just exploded."

Stokes addresses his mental health at length in an Amazon documentary, which will be released on Friday and features interviews with past and present England players, including team mate Stuart Broad.

In a trailer for the documentary, Broad says he could have seen Stokes never playing again, and when asked if that possibility had crossed his mind, Stokes said; "At the time, yeah. That's where I was at."

"I had never spoken to Stuart about that through my time away," Stokes added.

"I spoke to him a lot through that period but just general chit-chat, nothing too serious. I had never said the words to him, that I can't play again, but the fact that he got that feeling was an eye-opener to me that ... things were quite bad."

Stokes announced in July he would retire from One-Day Internationals citing the "unsustainable" rigour of playing all three formats of the game.

On Monday, he told the Telegraph he felt deep resentment towards cricket because he had been unable to visit his dying father as much as he wanted.

"So I had a real thing with cricket at the time I took a break. I was really angry at the sport because it was dictating when I could see my dad," Stokes said.

The all-rounder also stressed the importance of opening up about mental health.

"I find sometimes people are a bit nervous to go into the detail about that kind of stuff with me," he said.

"It's perceived you can't feel a certain way - that's a sign of weakness to show that you are not mentally feeling great. People think they can't ask people who have struggled. No. It's fine. I'll happily tell you as much as I possibly can."