New Zealand's batsmen picked up the pace way too late as Pakistan survived some tense moments before beating them by 14 runs in their Group D clash of the World Twenty20 in Pallekelle on Sunday.

Chasing 178, New Zealand, who beat Bangladesh in their lung-opener, played steady with the bat but it was a tad too slow for the format as they ended with 164 for nine.

Pakistan, on the other hand, put up a clinical performance with both the bat and ball to win the match comfortably. 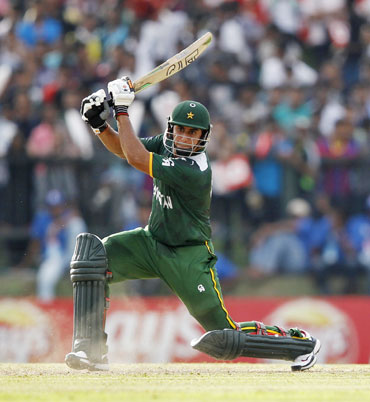 After Nasir Jamshed's maiden half century -- a 35-ball 56 -- and Mohammed Hafeez's fine 43-run knock guided the team to a challenging total, their bowlers completed the job by drying up the runs for the Kiwi batsmen.

Brendon McCullum (32) showed some spark but he hardly found any aggressive support at the other end and was castled by Umar Gul after striking four boundaries and a six in a 31-ball effort.

The rest of the Kiwi innings did not feature any worthwhile contribution as Saeed Ajmal worked his magic to pick up four wickets in his four overs that cost 34 runs.

Earlier, electing to bat, Pakistan rode on Jamshed's 35-ball 56 and some fine contributions from the openers -- Mohammed Hafeez (43) and Imran Nazir (25) -- to post a tough target for New Zealand.

The openers provided a steady start with a 47-run stand before Nazir's entertaining cameo, that came off 16 deliveries, was ended by Tim Southee.

Nazir, who struck five boundaries during his brief stay at the crease, was sent back to the pavilion after he pushed the ball right back to Southee, who took the catch in his follow through.

Nazir's departure, however, had little effect on the scoring rate which was steady at a little above nine an over as Hafeez and Jamshed combined for a 76-run partnership.

Jamshed was the aggressor in this stand even though Hafeez also managed a couple of fours and an equal number of sixes during his 38-ball stay in the middle.

Hafeez, who later bowled a miserly four-over spell that cost 15 runs, was castled by James Franklin while trying to swing across the line. His dismissal slowed down the scoring for a while as Kamran Akmal also made his way back to the dugout with a 3-ball 3.

Jamshed, who struck two boundaries and four sixes, also departed soon when his attempt to loft Daniel Vettori towards the boundary ended up in the hands of Nathan McCullum.

The two wickets hurt Pakistan's scoring rate and even though Umar Akmal (23) and Shoaib Malik (9 not out), who was surprisingly sent ahead of the aggressive Shahid Afridi, were aggressive between the wickets, the boundaries and sixes that rained at the start of the innings dried up towards the end.

Umar tied to make up for it but was dismissed by Jacob Oram just when he was beginning to pick up. His big hit landed straight in the hands of Nathan at long on. Akmal managed three fours and six during his 15-ball cameo. Once he finally arrived, Afridi rattled up 12 quick runs, including two fours, before being dismissed off the last ball. 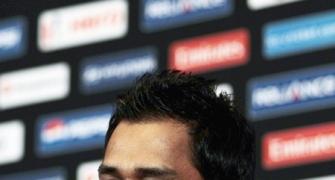 T20: India on look out for ascendance against Pakistan
World T20: The top batsmen and bowlers
India 'A' lose 3rd unofficial ODI, series ends in tie 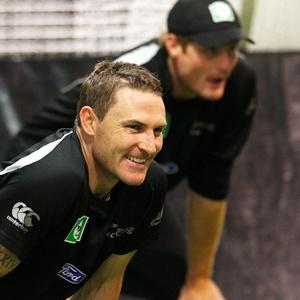 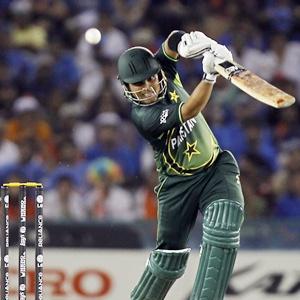