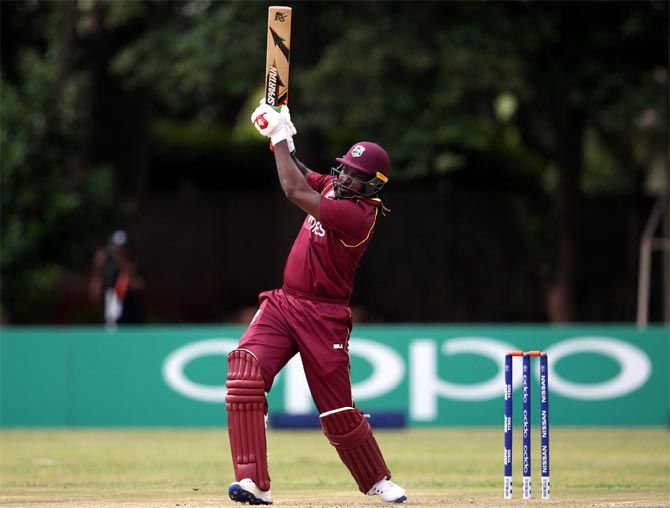 Chris Gayle joined Hashim Amla and Sachin Tendulkar as only the third batsman in the history of ODI cricket to score centuries against 11 different countries, while Shimron Hetmyer hit his maiden century as the Windies defeated the United Arab Emirates by 60 runs in their opening Group A fixture of the ICC Cricket World Cup Qualifier 2018 at the Old Hararians in Harare on Tuesday.

Gayle clubbed 11 sixes and seven fours in an electrifying 91-ball 123 and Hetymer belted 14 fours and four sixes in a whirlwind 93-ball 127 as the two-time world champions posted 357 for four after electing to bat first. The UAE, in their turn at the wicket, offered a stiff resistance before going down by 60 runs after finishing at 297 for six.

Rameez Shahzad, the 30-year-old right-handed batsman, showed a lot of courage and grit while scoring an attractive unbeaten 112. It was his second century in 13th ODIs, which came off 107 balls and was laced with nine fours and four sixes. He was well supported by Shaiman Anwar (64) and Adnan Mufti (45).

The Windies captain Jason Holder capped a good day for his side after returning figures of 10-1-53-5. Kemar Roach claimed the wicket of opener Chirag Suri, which gave him his 100th wicket in ODIs.

However, the star of the match was the 38-year-old Gayle, who was in sparkling form and made the ball disappear to all parts of the park at his leisure on a bright and sunny morning in front of 250-odd spectators. He reached his half-century from 47 balls with five fours and three sixes, while his next 50 runs came from 32 balls with two fours and five sixes.

When Gayle pushed UAE captain Rohan Mustafa for a single to mid-off for his 23rd career century, he added the UAE to his list of countries against whom he has reached three-figures. The other 10 countries to get Gayle’s wrath are Bangladesh, Canada, England, India, Kenya, New Zealand, Pakistan, South Africa, Sri Lanka and Zimbabwe.

Australia’s Ricky Ponting’s 29 centuries were against 10 countries, while his 30th was against the Asia XI in January 2005.

After Gayle departed at the score of 191 in the 29th over, Hetymer continued the good work when he took the UAE bowlers to the cleaners with some precise stroke-play and excellent shot selection as the Windies collected 166 runs in the last 21 overs.

Hetmyer, who captained the Windies to the U19 World Cup title in Bangladesh in 2016, reached his century from 78 balls with 10 fours and four sixes. He was eventually caught at the wicket off fast bowler Amir Hayat, who finished as the most expensive UAE bowler by conceding 80 runs off his 10 overs.

Zimbabwe handed Afghanistan their second successive defeat in the tournament when the African side successfully defended 196 runs to win by two runs in a nail-biting finish at the Queens Sports Club. It was Zimbabwe’s second straight victory and while it has enhanced their chances of reaching the Super Six stage, the defeat has left Afghanistan in serious trouble as they have to win their remaining two matches regains Nepal and Hong Kong to keep their hopes of qualifying for the World Cup alive.

Afghanistan were cruising at 163 for four before they slipped to 177 for nine. They needed six runs off the last over, but managed only three as Brian Vitori had Shahpoor Zadran caught at the wicket as the Asian side was bowled out for 194 in 49.3 overs.

However, 21-year-old fast bowler Blessing Muzarabani was Zimbabwe’s hero when he returned figures of 10-1-47-4 to create panic in the Afghanistan camp. Muzarabani was well supported by Sikandar Raza, who followed up his 60 with three for 40 to walk away with the player of the match award.

Afghanistan captain Rashid later said: “What a good game! We started off very well with the ball and finished very well and restricted them to under 200. The batsmen played some irresponsible shots because of which we lost the match. Lots of things to learn from it and hopefully in upcoming matches we will not repeat the mistakes.

“I think the positive thing was we bowled really well compared to the last match. In the middle we had some partnerships when Nabi and Rahmat were there but with 40 runs required and eight wickets in hand, played some irresponsible shots. It is part of cricket and it happens. These are the things that we learnt and hopefully will not repeat in the future.”

In their run-chase, Afghanistan were in some bother at 58 for three, but then Rahmat Shah (69, 91b, 5x4, 1x6) and Mohammd Nabi (51) added 98 for the fourth wicket to repair their damage. However, when Nabi fell victim to Raza, it opened all floodgates as the pace and spin combination of Muzarabani and Sikandar ran through the Afghanistan lower order.

A career-best 151 by Papua New Guinea (PNG) opener Tony Ura was not enough to prevent Ireland from registering their second straight victory when they won by six wickets.

The 28-year-old, who was the ninth batsman out, hit 10 fours and six sixes to carry his side to 235 all out in 50 overs. This was 64.26 per cent of the total, the highest-ever in an all-out ODI innings. Together with Chad Soper (25), Ura added 83 runs for the seventh wicket after PNG were struggling at 116 for seven in the 33rd over.

In their turn at the wicket, Ireland were led from the front by their captain William Porterfield, who struck his 11th career century as the European side achieved their second consecutive victory with four wickets and five balls to spare.

Scotland off-spinner Tom Sole returned figures of 10-5-15-4 and fast bowler Alasdair Evan bagged three for 19 at the Bulawayo Athletic Club as Hong Kong collapsed from 46 for no wicket in the 11th over to 91 all out in the 39th over.

The defending champions almost made a mess of a small total, before romping to their second successive victory in Group B in the 24th over for the loss of six wickets. Captain Kyle Coetzer was the top scorer with 41 not out, Ehsan Khan took three for 29 and Ehsan Nawaz picked up two for 24.

Sole, later adjudged player of the match, said: “From the start of the day, it looked a bit tackier, I think, compared to the wicket we played Afghanistan on, so I thought there might be a little more turn, thankfully there was, for me.

“It’s a spinner’s paradise. It will be interesting later on in the competition seeing if the wickets are getting drier and spin becomes even more of a factor. But our batters batted comfortably well in there, Coetzer did a great job at the top and managed to get us home.”