Former champions Sri Lanka are all but out of the ongoing World Cup after suffering a nine-wicket drubbing from a clinical South Africa, in Chester-le-Street, on Friday.

Sent in to bat, Sri Lanka produced a dismal batting show and posted a modest 203. The Proteas overhauled it with 76 balls to spare.

With just six points from seven games, Sri Lanka still have a mathematical chance of progressing to the semi-finals. First, they need to win their last two outings against already-eliminated West Indies (on July 1) and India (July 6) and then depend on favourable results from other remaining league stage games.

The win, however, came as welcome relief for South Africa, who endured a nightmarish World Cup campaign.

The Proteas are already out of the tournament, having registered just two wins from eight games. Chasing the modest target, South Africa lost Quinton de Kock (15) at the score of 31 in the fifth over, but, thereafter, Hashim Amla and skipper Faf du Plessis held fort and stitched an unbeaten 175-run stand to guide them home comfortably.

While Du Plessis remained unbeaten on 96 off 103 balls, hitting 10 boundaries and one six, Amla finished on 80 not out off 105 balls, inclusive of five fours.

Lasith Malinga (1/47) was the only successful bowler for Sri Lanka. 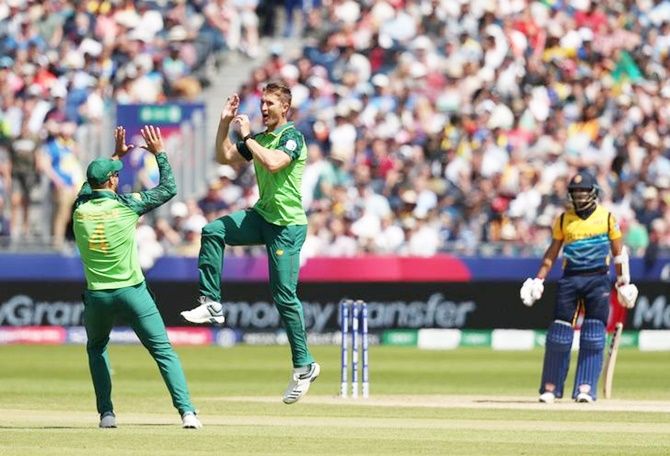 Earlier, opting to bowl, the Proteas picked up wickets at regular intervals after the first 10 overs and never allowed the Sri Lankan middle-order settle down.

Drafted into the playing eleven in place of Lungi Ngidi, pacer Dwaine Pretarius (3/25) justified his selection with a three-wicket haul.

Chris Morris (3/46) and Kagiso Rabada (2/36) shared five wickets between themselves.

The match halted for a minute or so in the 48th over of Sri Lanka's innings after a swarm of bees invaded the centre of the ground. The players and on-field umpires were forced to hit the ground to save themselves from a swarm of bees that entered the field. Luckily, none was stung by the insects.

Sri Lanka had a horrible start as they lost skipper Dimuth Karunaratne to the first ball of the match, caught by his counterpart Faf du Plessis at second slip off Rabada. 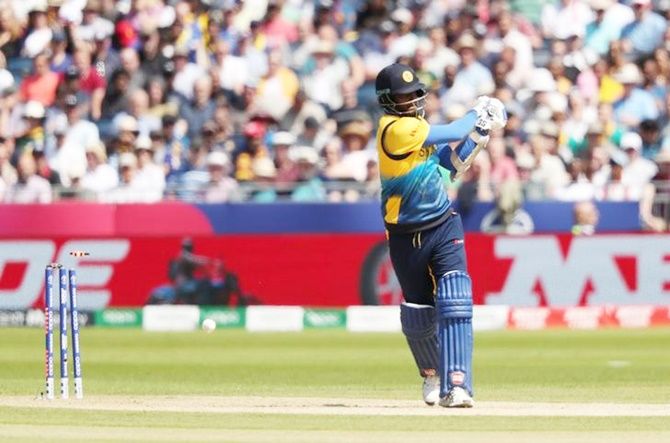 Thereafter, Kusal Perera (30 off 34) and Avishka Fernando (30 off 29) took the counter-attacking approach and played fearlessly to stitch a 67-run stand off 58 balls before the duo perished in quick succession.

Right-arm pacer Pretorius sent both the batsmen packing in consecutive overs as Sri Lanka slumped to 72 for three in 11.3 overs. IMAGE: Kusal Perera rallied Sri Lanka after the loss of Dimuth Karunaratne to the first ball of the match. Photograph: Lee Smith/Reuters

New-man Angelo Mathews looked in no hurry and took 29 balls to score his 11 runs before he played on a Morris delivery in the 22nd over.

Kusal Mendis (23 off 51) had to dug deep for his runs before he became Pretorius's third victim, spooning one to Morris at extra cover.

Dhananjaya de Silva (24) , Jeeva Mendis (18) and Thisara Perera (21) all got starts but threw away their wickets when Sri Lanka needed them to carry on.