Images from Tuesday's World Cup match between India and Bangladesh, at Birmingham. Rohit Sharma's dream run with the bat and Jasprit Bumrah's brilliance at the death helped India beat Bangladesh by 28 runs to clinch a semi-final berth in the ICC World Cup, in Birmingham, on Tuesday.

It was Rohit's (104 off 92 balls) record-equalling fourth century in a single edition and his 180-run opening stand with K L Rahul (77 off 92 balls) that laid the foundation for India's total of 314 for nine after they had elected to bat.

The chase wasn't impossible but Shakib Al Hasan (66 off 74 balls) didn't get any notable support from the other end as Bangladesh were bundled out for 286 in 48 overs.

But Mohammed Shaifuddin's 51 not out off 39 balls did raise slim hopes of a victory before Bumrah (4/55), with his toe-crushers, dashed Bangladesh's optimism. 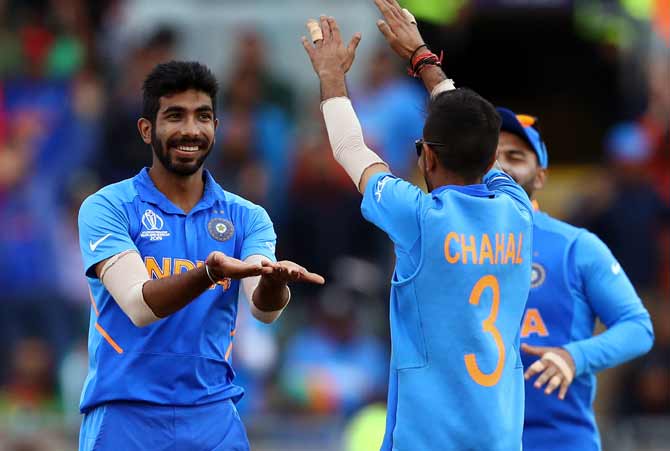 Hardik Pandya (3/60 in 10 overs) also showed that his worth in limited overs with his display with the ball.

India with 13 points from eight games qualified for the semi-finals along with Australia (14 from 8 games), while Bangladesh were knocked out of the tournament.

Ironically, on a day when Rohit's record 26th ODI hundred ensured a seventh semi-final appearance for his side, Bangladesh were left high and dry despite Shakib's coveted record double of 500 plus runs and 10 plus wickets in a single edition of the World Cup.

For Indian bowlers, it was another good day in office after English nightmare as Yuzvendra Chahal (1/50 off 10 overs) found his mojo back with a controlled effort while Bhuvneshwar Kumar (1/51 in 9 overs) also bowled a steady first spell in the company of ever-reliable Bumrah.

Shakib also couldn't play in his free-flowing manner as there wasn't a single half-century stand for the first five wickets. 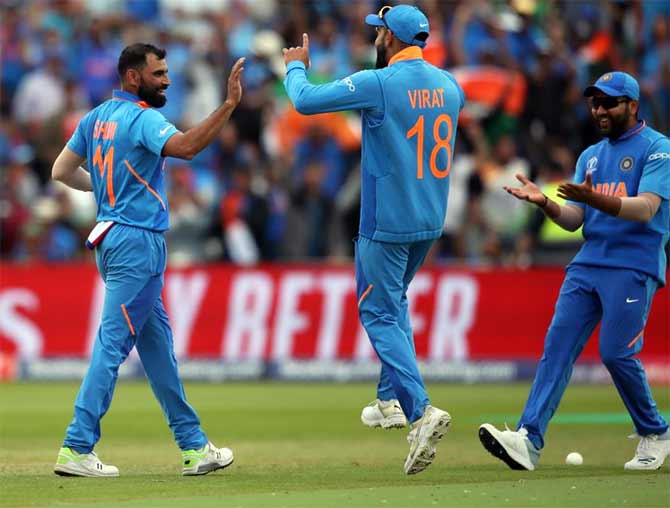 Sabbir Rahman (36) and Shaifuddin added 66 for the seventh wicket but Bumrah, coming on for his third spell, ended their hopes.

Shaifuddin's attacking half-century kept Bangladesh's slim hopes alive but India's bowlers kept chipping away at the wickets from the other end. He finished the match with in style with wickets off successive deliveries, dismissing Rubel Hossain (9) and Mustafizur Rahman (0) with perfect yorkers to finish off Bangladesh's hopes.

Earlier, Rohit continued his dream run with a record-equalling fourth century, but India’s batting again lacked the final flourish as they were restricted to a par score of 314 for nine.

Mahendra Singh Dhoni (35 off 33 balls) failed to get going again as India scored only 63 runs in the last 10 overs after Rohit's 26th ODI century and Rishabh Pant's (48 off 40 balls) flamboyance had taken India to 251 for 4.

Dhoni looked ill at ease against Mustafizur Rahaman's (5/59 in 10 overs) brilliant variations and Shakib Al Hasan's (1/41 in 10 overs) accuracy. The former India skipper refused two singles in the final over before he was out to the third delivery as India lost momentum towards end of the innings. 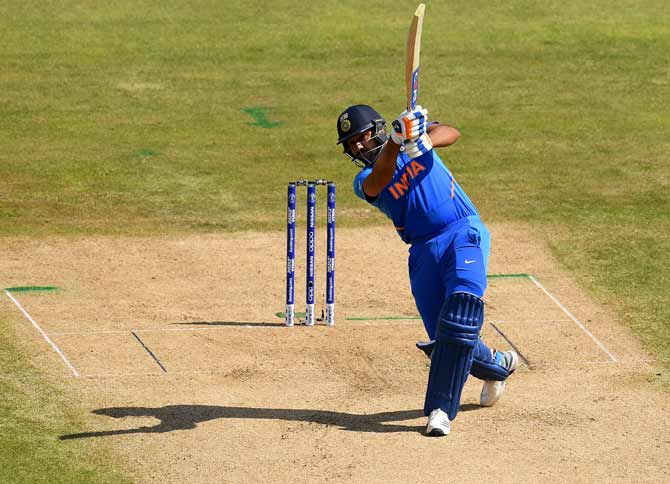 Rohit's (104 off 92 balls) love affair with Bangladesh continued, as he also scored his first World Cup ton in the previous edition in Australia and another century in the 2017 Champions Trophy semi-final at this very venue at Edgbaston against them.

There were no marks for guessing that Virat Kohli would have opted to bat and Rohit along with K L Rahul (77 off 92 balls) added 180 for the opening wicket to set the platform.

En route his ton, that had seven fours and five sixes, Rohit also equalled Kumar Sangakkara's record of four tons in a single edition of the World Cup, having already registered scores of 122 not out (vs South Africa), 140 (vs Pakistan) and 102 (vs England) in earlier games. 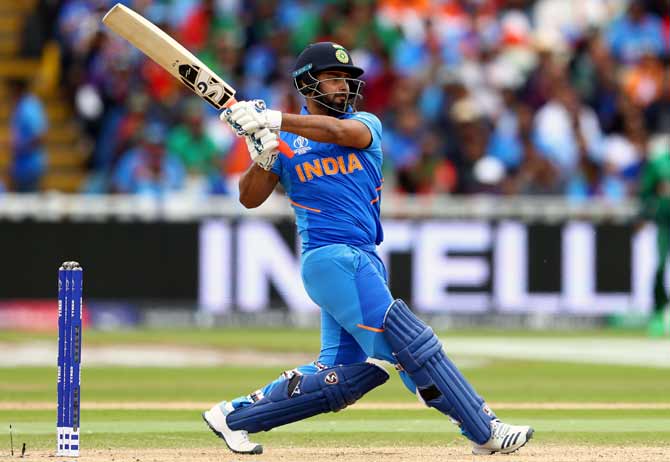 Mashrafe Mortaza started the proceedings but pulled himself out after a solitary over as Rohit hit first of his five sixes – a pull-shot on the shorter side.

Rohit enjoyed a reprieve on a personal score of 9, when Tamim Iqbal, at deep mid-wicket, dropped a sitter off Mustafizur.

However, the two sixes that will stay in his memory for a long time were a cover driven six over extra cover off Mohammed Saifuddin and a straight six off Mustafizur. He also pulled off-spinner Mosaddek Hossain and Shakib for two more sixes. 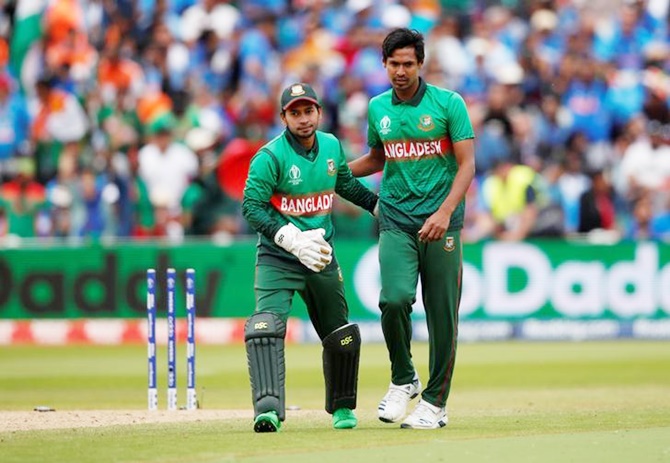 Even as Hardik Pandya missed out after being deceived by an off-cutter from Mustafizur.

After the bowler accounted for Kohli, Pant took it upon himself, hitting Saifuddin for three successive boundaries in the 40th over.

Just when it looked that Pant would launch a brutal final assault, his mistimed slog sweep went straight to Mosaddek, at deep backward square, who somehow held on to the catch after an initial fumble.

It was left to Dhoni to build on, and though he showed more intent, he again struggled to hit the big shots in the end overs.