Spin wizard Muttiah Muralitharan and all-rounder Angelo Mathews are doubtful for the World Cup final against India, prompting the Sri Lankan team management to call in Chaminda Vaas and Suraj Randiv as standbys for the the April 2 clash in Mumbai.

The Sri Lankan team led by Kumar Sangakkara arrived in Mumbai on Wednesday to play their second successive final of the mega-event after finishing runners-up to Australia four years ago in the West Indies.

Muralitharan has struggled with niggles through the tournament, including a hamstring injury, a side strain, a troublesome knee and a groin issue while Matthews suffered a minor injury while fielding during Sri Lanka's win over New Zealand in the semi-final. 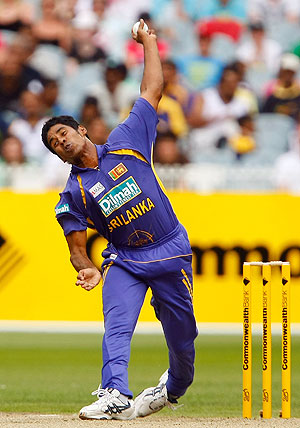 Muralitharan also played in the semi-final in Colombo, despite not being in the best physical condition. The final, if he plays in it, will be his last international game as he had announced his retirement after the World Cup.

Sri Lankan newspaper Daily News quoted a team spokesman as saying that Mathews will need at least a couple of days to recover and will be working with the physio to be fit for the final on Saturday at the Wankhede Stadium.

Selection committee sources revealed that former Sri Lanka fast bowler Chaminda Vaas has been kept on standby as a replacement for 24-year-old Mathews.

Left-arm seamer Vaas last played an international game in July 2009, and hasn't featured in an ODI since August 2008. Randiv missed out on a World Cup spot to Rangana Herath and Ajantha Mendis.

The summit clash on Saturday will be the first-ever all-Asia final in the history of the tournament.