# O'Brien has set a record for the quickest hundred in the World Cup, eclipsing the 66-ball by Matthew Hayden for Australia against South Africa at Basseerre on March 24, 2007.

# The aforesaid hundred is the fastest by any player against England in ODIs. His hundred off 50 balls is the sixth quickest in the history of ODIs.

# Shahid Afridi has recorded two hundreds out of the top four -- 37 balls against Sri Lanka at Nairobi on October 4, 1996 and 45 balls against India at Kanpur on April 15, 2005. Mark Boucher's 44-ball hundred against Zimbabwe at Potchefstroom on September 20, 2006 is the second fastest, followed by 45 balls by Brian Lara against Bangladesh at Dhaka on October 9, 1999 and 48 balls by Sanath Jayasuriya against

# Ireland (329 for seven), with their first triumph over England in ODIs/World Cup, have recorded the highest successful chase in the World Cup, surpassing the 313 for seven by Sri Lanka against Zimbabwe at New Plymouth on February 23, 1992.

# Ireland's aforesaid total is the second best by a team batting second in the World Cup, behind England's 338 for eight against India at Bangalore on February 27, 2011.

# Ireland's total is their highest in the World Cup, eclipsing the 243 for seven against Bangladesh at Bridgetown on April 15, 2007.

# Actually, Ireland's aforesaid total is their highest in ODIs, eclipsing the 325 for eight against Canada at Toronto on September 7, 2010.

# Kevin O'Brien and Alex Cussack have recorded a 162-run stand -- a record for the sixth wicket in the World Cup, eclipsing the 161 between Maurice Odumbe and Alpesh Vadher for Kenya against Sri Lanka at Southampton on May 30, 1999.

# The aforesaid partnership is Ireland's highest for the sixth wicket in ODIs, eclipsing the 76 between Mooney and Paul Stirling against Kenya at Dublin on July 12, 2009. 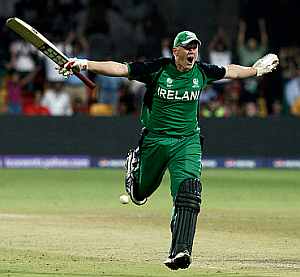 # The 162-run partnership is the first century stand for Ireland for any wicket in the World Cup.

# Kevin O'Brien is the first batsman to hit six sixes in an innings in the 2011 edition of the World Cup.

# Kevin O'Brien has set a record for the highest run-aggregate in ODIs for Ireland, amassing 1486 (ave.36.24) in 54 matches, including two hundreds and seven fifties.

# Kevin O'Brien has received his first Man of the Match award against a Test-playing country -- his fourth overall in ODIs.

# Fourteen sixes recorded in the game -- five by England and nine by Ireland -- are the highest in the tenth edition of the World Cup.

# Ireland's three wicket win is their third in the World Cup. In the last edition, they had defeated Pakistan by 3 wickets at Kingston on March 17 and Bangladesh by 74 runs at Bridgetown on April 15.

# Ian Bell and Jonathan Trott were associated in a stand of 167 for the third wicket, which is England's best for any wicket against Ireland in ODIs

# Ian Bell (81 off 86) has recorded his highest World Cup innings -- his third fifty.  For the first time, Bell has registered successive fifties in the World Cup.

# Bell's run-aggregate of 192 (ave.64.00) in three games is the highest for England against Ireland in ODIs.

# Mooney is the first Ireland bowler to take four wickets in an innings in the World Cup.

# Jonathan Trott has posted his eighth fifty in ODIs -- his first against Ireland.

# In the course of his highest innings in the World Cup, Trott has  amassed 1,000 runs in ODIs -- 1028 at an average of 54.10 in 21 innings.  He has equalled the feats of West Indian Vivian Richards and Kevin Pietersen -- all three batsmen share a world record for taking 21 innings to 1,000 runs in ODIs.

# Trott holds a record as regards the matches to this feat in ODIs is concerned, having taken 21 ODIs to reach the milestone, followed by Vivian Richards (22) and Gordon Greenidge (23).

# William Porterfield has registered his third duck in ODIs -- all three in the World Cup.

# Trent Johnston has become the first Irish bowler to complete 50 wickets in ODIs.

# Graeme Swann (3/47) has recorded his best performance in the World Cup.

# Kevin O'Brien has reached his 50 off 30 balls  the fastest fifty for Ireland in ODIs. 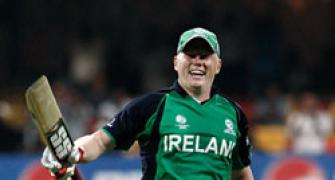 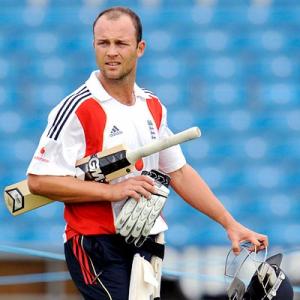