Statistical highlights from the World Cup quarter-final between India and Australia played in Ahmedabad on Thursday.

# Yuvraj Singh (341 runs and 11 wickets) is the second Indian all-rounder and the fourth overall to complete 300 runs and bag 10 wickets or more in a World Cup competition. Kapil Dev was the first Indian all-rounder to register the double, having accomplished the feat in the 1983 World Cup (303 runs and 12 wickets in eight matches). 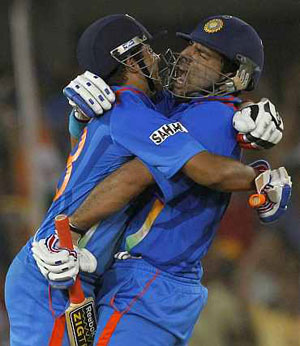 # Mahendra Singh Dhoni has become the first wicketkeeper/captain to have appeared in 100 ODIs.

# Ricky Ponting (104 off 118 balls) posted his highest knock at this World Cup. He is the first batsman to register four hundreds as captain at the World Cup, eclipsing Sourav Ganguly's feat of three centuries.

# Ponting's tally of five hundreds at the World Cup is the most by an Australian, bettering Mark Waugh's tally of four.

# India (261 for five) recorded their second highest successful chase at the World Cup, next only to the 276 for four against Pakistan at Centurion on March 1, 2003.

# India registered their first victory at Motera after losing the previous four. Overall, India have won six and lost seven out of 13 contested at Motera -- winning percentage 46.15.

# Haddin became the second Australian to complete the wicketkeepers' double of 300 runs and effect 10 or more dismissals in a World Cup competition. Adam Gilchrist had recorded the double twice -- in 2002-03 and 2006-07.

# Haddin is the third player in the present competition to post four 50-plus innings, joining Yuvraj Singh and Jonathan Trott. Yuvraj is the only batsman to register one hundred and four fifties.

# Mahendra Singh Dhoni captained India for the 100th time in ODIs. He became the third Indian captain after Mohammad Azharuddin (174) and Sourav Ganguly (147 overall & 146 for India) to achieve the feat.

# Tendulkar is the leading run-scorer in the present competition - 379 at an average of 54.14, including two centuries and one fifty.

# Ponting is the second batsman to register 30 centuries or more in ODIs. Only Tendulkar has posted more hundreds (48) than Ponting in ODIs.

# Yuvraj Singh (2/44) has recorded his best bowling performance against Australia in ODIs.

# Yuvraj's tally of 11 wickets at an average of 24.63 in seven matches is his best in a competition/series.