Sri Lanka all-rounder Angelo Mathews has been ruled out of Saturday's World Cup final against India after injuring his right thigh muscle in the semi-final against New Zealand.

In a statement on Friday, the International Cricket Council said it had approved off-spinner Suraj Randiv as a replacement for Mathews in the Sri Lanka squad.

The 1996 champions are also monitoring the fitness of spinner Muttiah Muralitharan, who is suffering from a hamstring injury and a bruised knee. 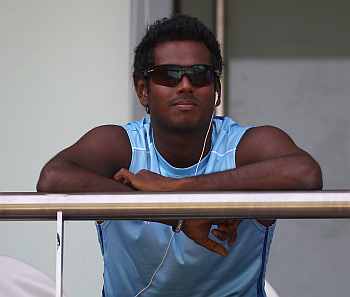 Muralitharan, the world record holder for Test and One-day wickets, will retire from all international cricket after Saturday's match.

India left-arm pace bowler Ashish Nehra is unlikely to play after fracturing the middle finger on his right hand during the semi-final against New Zealand.

"Ashish is most likely to be ruled out," captain Mahendra Singh Dhoni told a news conference at the Wankhede Stadium on Friday.

Asked about his bowling options in the probable absence of Nehra, Dhoni indicated he might be replaced by another pace bowler.

"The Mumbai pitch has pace and bounce," he said. "If there's reverse swing, then a seamer can have an impact on the game. If you have three spinners then you don't have that room to manoeuvre."