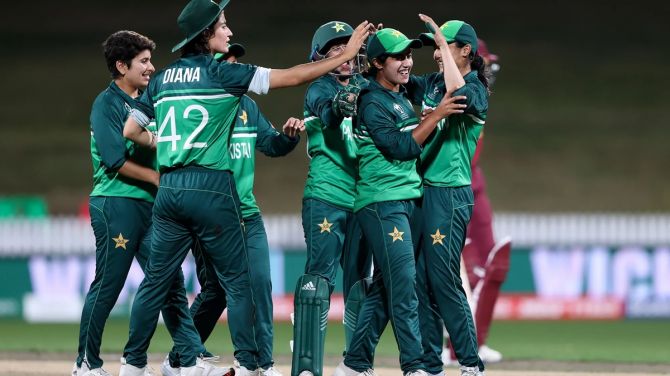 Pakistan ended their 18-match losing streak with an eight-wicket win over the West Indies in the Women's ODI World Cup, in Hamilton, on Monday.

Spinner Nida Dar returned with impressive figures of four for 10 to help Pakistan restrict West Indies to 89 for seven after opting to field in the rain-curtailed match which was reduced to 20-over-a-side affair because of damp outfield at Seddon Park.

Besides Dar, Omaima Sohail (1/12), Fatima Sana (1/14) and Nashra Sandhu (1/24) picked up a wicket each as Pakistan produced an inspired bowling effort.

Opener Deandra Dottin (27) top-scored for West Indies, while Stafanie Taylor (18) and Afy Fletcher (12 not out) were the other two Caribbean batters to have managed double digit scores.

Chasing 90, Pakistan, who have so far lost all their four matches to be placed at the bottom of the eight-team standings, lost opener Sidra Ameen (8) in the sixth over with their scorecard reading 22.

Muneeba Ali (37 off 43) and skipper Bismah Maroof then shared 35 runs for the second wicket before the former departed with Pakistan still needing 31 runs off 46 balls. Muneeba struck five boundaries during her knock.

But Maroof (20 not out) played sensibly without taking any risks and in Sohail's (22 not out) company stitched unbeaten 33 runs for the third wicket to romp home with seven balls to spare.

While the win be a huge morale booster for Pakistan ahead of their remaining two league games, the defeat put West Indies' semifinal hopes at a risk.

Despite the loss, West Indies still occupy the third spot with six points from six games. Pakistan still are in the last spot.