Harmanpreet Kaur's half-century went in vain as West Indies women eked out a 15-run victory over India to complete a 3-0 sweep of the T20I series in Malapadu, Andhra Pradesh on Tuesday. 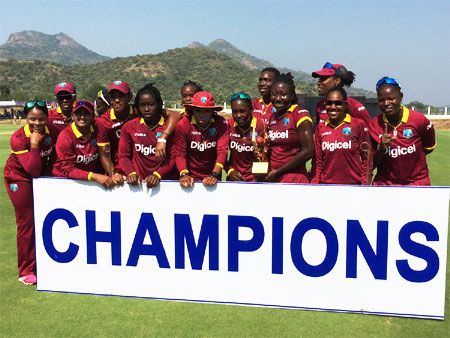 Opting to bat, West Indies scored a modest 139 for four from their allotted 20 overs but managed to restrict India to 124 for three.

Chasing 140, India lost their top-order cheaply to be reeling at 32 for three in 5.5 overs with opener VR Vanitha getting run out for a duck, followed by Meghna Singh (19) and Smriti Mandhana (6) -- both of whom were dismissed in the Powerplay.

Veda Krishnamurthy (31 not out) and skipper Harmanpreet Kaur (60 not out) then consolidated the innings and batted together till the end of the match, adding unbroken 92 runs for the fourth wicket.

But the duo's effort was not enough to see the hosts through. Krishnamurthy failed to hit a single boundary during her 40-ball knock, struggling to keep up to the asking run-rate, even as Harmanpreet managed to maintain a 100-plus strike rate, hitting three fours and three sixes in her 51-ball innings.

Earlier, West Indies got off to a strong start with openers Hayley Matthews (47) and Stafanie Taylor (44) adding 61 runs for the first wicket in 6.4 overs.

Matthews was the more dominating of the two and did bulk of the scoring. Her 22-ball 47 included seven boundaries and a six before Poonam Yadav had her caught behind.

Taylor anchored the rest of the innings and remained unbeaten. She also put on crucial partnerships with Kycia Knight (16) and Britney Cooper (11).

Image: The victorious West Indies women's team after their win over India on Tuesday