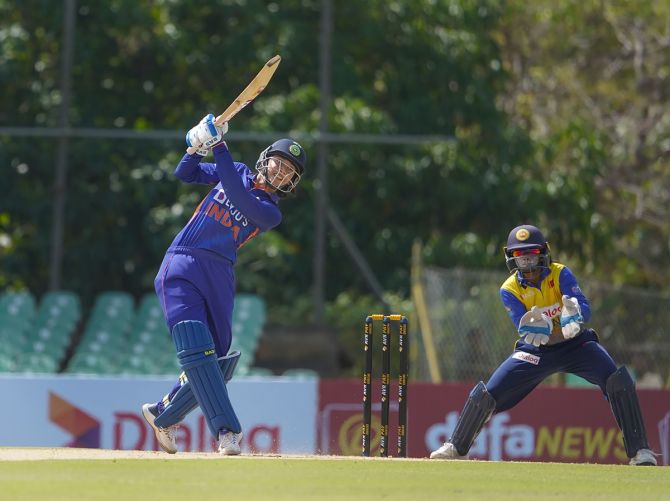 IMAGE: India will be looking for a good knock from opener Smriti Mandhana against Sri Lanka in the second women’s ODI in Pallekele on Monday. Photograph: PTI

The Indian women's cricket team will look for stability from its top-order as it sets out to seal the three-match ODI series against Sri Lanka in the second game in Pallekele on Monday.

After clinching the preceding T20 series 2-1, India have a 1-0 lead in the ODIs having won the low-scoring first match by four wickets.

"Our approach will be the same as before; we have to win the series 3-0 and dominate all the matches. Whatever plans and preparations we have made we need to execute," said all-rounder Pooja Vastrakar at the pre-match press conference on Sunday.

Despite the comfortable victory in the first ODI, the Indian think-tank will be a bit concerned about the opening pair of vice-captain Smriti Mandhana and young Shafali Verma.

Both the batters got a few runs but were not able to translate them into big scores. They failed to build a decent partnership on the tour so far, denying the team electrifying starts which it is known for.

Thus Mandhana and Verma will be gunning for a big score with just two matches remaining on the tour.

Skipper Harmanpreet Kaur, on the other hand, seems to be relishing her role, scoring runs and providing breakthroughs with her part-time off-spin.

The Indian bowlers, especially the slower ones, are simply enjoying the low and slow Sri Lankan tracks and have played a crucial role in the team's victories on the tour.

Right-arm medium pacer Renuka Singh excelled with figures of 3 for 29, though it was Deepti Sharma's off-breaks that broke Sri Lanka's backbone and restricted the hosts to 171 all out in the first ODI.

While the Indian bowlers have excelled on the tour, the batters are plagued by inconsistencies.

Verma squandered a promising start as the top order crumbled while chasing a modest total in the opening ODI.

The middle order, comprising the likes of Harmanpreet, Harleen Deol, Deepti, who showed her all-round capabilities, and Pooja Vastrakar bailed India out in the opener.

Sri Lanka, on the other hand, are hoping skipper Chamari Athapaththu can inspire the side with the bat after a relative poor show so far.

The likes of opener Hasini Perera, Harshitha Samarawickrama and Nilakshi de Silva have batted well but need to stitch partnerships.

On the bowling front, left-arm spinner Inoka Ranaweera has shone bright but will need more support from her teammates.

Sri Lanka lost the ODI series against Pakistan last month and would look to avoid a second consecutive series loss in the format.