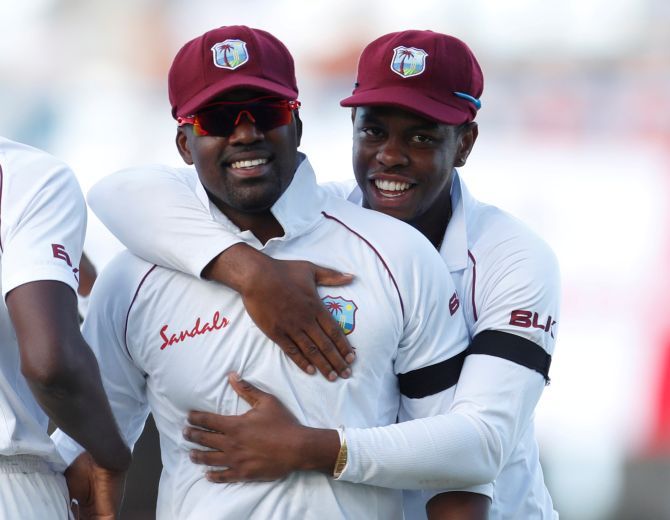 IMAGE: 'I think it's unfortunate for the West Indies team because these guys have quite a bit of talent, and they'll be missed.' Photograph: Paul Childs/Action Images via Reuters

Pace great Michael Holding believes West Indies will particularly miss batsmen Darren Bravo and Shimron Hetmyer on their tour of England after they, along with all-rounder Keemo Paul, opted out of the series because of COVID-19 fears.

The three-Test series is scheduled to be played in July behind closed doors at 'bio-secure' venues of Ageas Bowl and Old Trafford, subject to British government approval.

"I think it's unfortunate as far as West Indies cricket is concerned," Holding said on his YouTube channel.

"I'm not going to tell anyone that they should be going to England because COVID-19 is around, someone may get sick or even worse," he said.

"But at the same time I think it's unfortunate for the West Indies team because these guys have quite a bit of talent, and they'll be missed."

West Indies dropped Bravo for the one-off Test against Afghanistan in November and Holding reckoned the England tour was a missed opportunity for the top-order batsman trying to revive his stop-start career.

"I'm sorry that Bravo in particular isn't going because Bravo, I think, needs to resuscitate his career," the 66-year-old Jamaican said.

"I think the more cricket he can play now, especially for West Indies, the better chance he has of getting back on track and showing everyone the great player that he could be."

"Again, I'm sorry that he's not going so that he can get more opportunity to express himself. But I ain't blaming them for not going."

Bishop echoed Holding's sentiments, saying players must get an option during a health crisis situation.

"You have to give players the option because it's a world health crisis," Bishop told the Trinidad Express.

"If a player decides he does not want to take that health risk, you can't hold it against him in this context. The players know they are taking a risk if someone who replaced them goes on to have great success. That's a chance you take," he said.

The Test series, to be played in a bio-secure environment to counter the COVID-19 threat, is subject to the final approval of the UK government. The contest will also mark the return of international cricket which was suspended in the wake of the coronavirus outbreak.

The West Indies squad will arrive in the UK on June 9 and will travel to Old Trafford for quarantining and training. The venue will be their base for three weeks before they move to the Ageas Bowl for the start of the first Test.