The left-hander remains a dangerous batsman capable of single-handedly destroying any bowling attack with his trademark power-hitting. 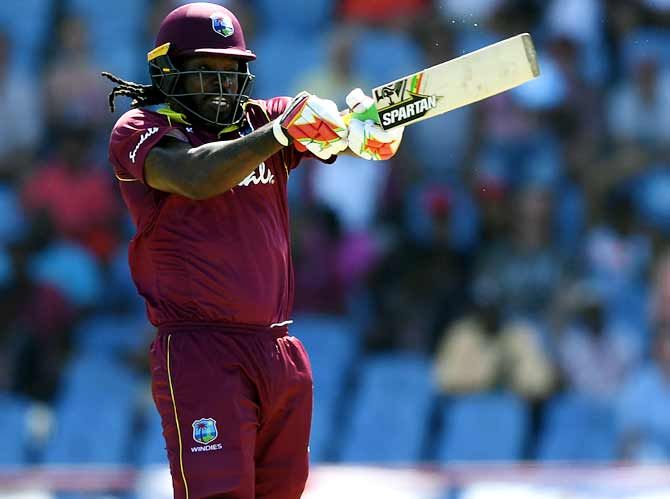 IMAGE: Chris Gayle's eye appears as sharp as ever, judging by the way he bludgeoned England's bowlers in the drawn ODI series earlier this year. Photograph: Gareth Copley/Getty Images

Chris Gayle's recent form promises batting fireworks from the swashbuckling opener in his fifth and final World Cup and offers plenty of hope to a West Indies team finally showing signs of a resurgence.

Gayle will turn 40 in September but remains a dangerous batsman capable of single-handedly destroying any bowling attack with his trademark power-hitting which makes him one of the sought-after players in Twenty20 leagues across the cricketing world.

Though not exactly lightning-quick between the wickets, or in the field, Gayle's eye appears as sharp as ever, judging by the way he bludgeoned England's bowlers in the drawn ODI series earlier this year.

He smashed two magnificent centuries in four innings against England, scoring 424 runs at an average of 106 to walk away with the Man-of-the-Series award.

His 135 off 129 balls in the first match in Bridgetown included 12 sixes but was a mere appetizer for what was to follow seven days later in St George's.

There on the island of Grenada he took just 97 balls to smash 162, including 14 sixes, mostly on the leg side, several clearing the ground altogether.

He now brings his bat to England, where some of the boundaries might be a little longer, but will nevertheless be well within his reach.

"There's nothing to go out there and prove, the only thing that would be nice is to win the World Cup," Gayle told cricket.com.au. 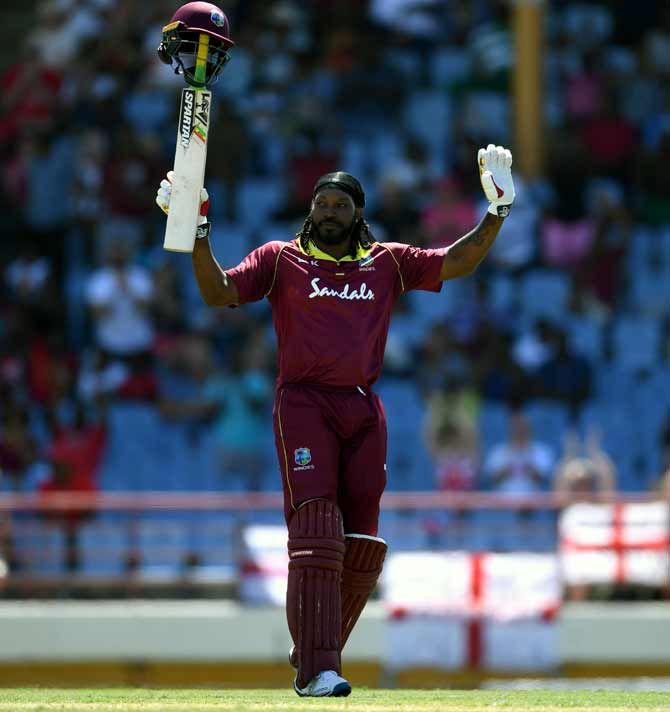 IMAGE: Chris Gayle believes bowlers are still terrified of his power-hitting even in his 20th year in international cricket. Photograph: Gareth Copley/Getty Images

The left-hander is coming off another strong season in the Indian Premier League (IPL), smashing 490 runs in 13 innings, his 34 sixes only second to compatriot Andre Russell's 52.

Gayle's 326 sixes in 11 seasons is the highest by any batsman in the most popular Twenty20 league.

"The fans are always asking you for more sixes. Those things give you that extra drive," said Gayle, the most experienced West Indies player in the squad with 10,151 runs in 289 ODIs.

His reflexes may have slowed down in recent times but the self-styled 'Universal Boss' believes bowlers are still terrified of his power-hitting even in his 20th year in international cricket.

"Youngsters coming at my head - it's not as easy as it was like one time before," Gayle said. "I was quicker then.

"But they'll be weary. They know what the Universe Boss is capable of. I'm sure they will have it in the back of their mind, 'Hey, this is the most dangerous batsman they've ever seen in cricket.'"

Two-time champions West Indies begin their campaign against 1992 winners Pakistan on May 31 at Trent Bridge.