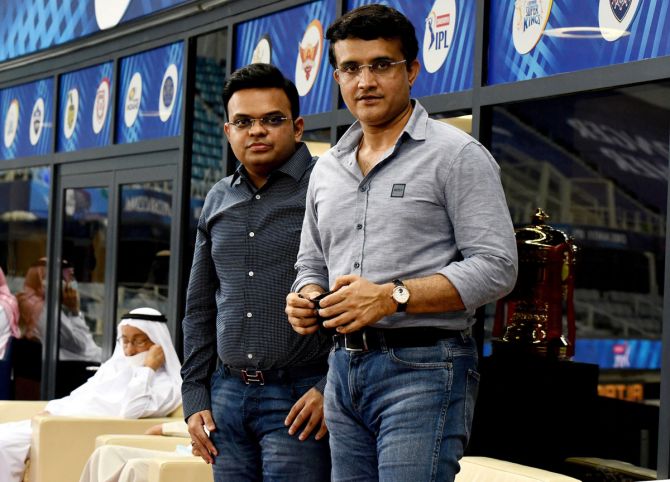 With IPL 2021 suspended indefinitely on Tuesday, May 4, due to multiple COVID-19 cases in the teams' bio-bubbles, it remains to be seen if the cash-rich T20 league once again forces the postponement of the T20 World Cup.

The Twenty20 World Cup, which is scheduled to be held in India in October-November, could be moved to the United Arab Emirates if the COVID-19 crisis does not subside in India.

But if the BCCI decides to conduct the remaining IPL games later in the year, given the huge sum of broadcasting money at stake, then the axe could fall on the T20 World Cup like it happened last year.

India has been reeling under the deadly second wave of COVID-19 infections in the past few weeks, with cases in excess of 300,000 every day.

The IPL 2021 season, which began on April 9, went on smoothly for the first few weeks with matches being staged in Chennai and Mumbai. But the trouble started when the matches were played in Delhi and Ahmedabad.

It took no time for the cases to rise as within 24 hours of the KKR duo testing positive, more cases were reported in the other teams.

A couple of IPL games were then rescheduled owing to the COVID-19 positive cases with the BCCI contemplating a move to shift all the remaining games to Mumbai to somehow salvage the tournament.

But it was clear there was no way back after Sunrisers Hyderabad's wicketkeeper-batsman Wriddhiman Saha tested positive for COVID-19 along with Delhi Capitals's veteran spinner Amit Mishra on Monday.

'The BCCI does not want to compromise on the safety of the players, support staff and the other participants involved in organising the IPL. This decision was taken keeping the safety, health and well-being of all the stakeholders in mind,' BCCI said in a statement on Tuesday.

The Board said it will do everything possible to secure the return of overseas players to their respective countries.

Players from Australia face a huge task as far as getting back home is concerned. Australia will not permit any commercial flights from India because of the COVID-19 surge. The Australian government made it clear that Australians, who are engaged in the IPL, will have to make their own arrangements to return.

Three Australian players have already returned home, while Aussie commentator Michael Slater rushed off to the Maldives, unable to return to his country after the suspension of flights from India until at least May 15.

Players from England and New Zealand will also struggle to get home given that their countries have suspended flights from India.

It remains to be seen if these players would be keen to return to India in six months' time to play in the T20 World Cup given the nightmarish experience they have faced this time.

The BCCI has earmarked the UAE as the backup venue in case India is unable to host the T20 World Cup and given how the Board was forced to suspend the IPL, it would only be wise to make that switch.

'The suspension of the IPL within four weeks is an indicator that it's not really safe to host a global event of that magnitude at a time when the country is fighting its worst health crisis in 70 years,' a senior BCCI source told PTI.

'There is a chance of a third wave hitting the Indian shores in November. So while the BCCI will remain the hosts, the tournament will probably shift to the UAE,' he added.

How the IPL bio-bubble was breached will pose a big question mark for the BCCI and it could cost them money-minded Board a lot of money if it is unable to reschedule the league later in the year.

In a similar scenario to last year, could the IPL once again force the T20 World Cup to be sacrificed?

The T20 World Cup, scheduled to be held last year in Australia, was postponed after the all-powerful BCCI had its way by scheduling the IPL in the UAE from September to November after COVID-19 had forced the league to be moved out of the country in April-May.

31 games (including the play-offs) in IPL 2021 are left to be played and October-November will be the only period when international players will be available since no country has any series scheduled in view of the T20 World Cup.

Will BCCI President Sourav Ganguly and Secretary Jay Shah have their way once again?