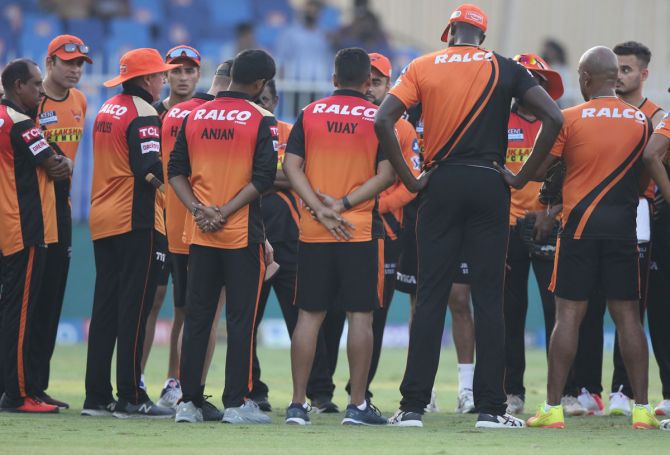 IMAGE: With nine defeats from 11 matches, Sunrisers Hyderabad are out of the IPL play-offs and languishing at the bottom of the points table. Photograph: BCCI

Out of the play-offs race, bottom-placed Sunrisers Hyderabad will look to dent Kolkata Knight Riders' chances of making it to the knock-out stage when they face off in Sunday’s Indian Premier League match in Dubai.

With nine defeats from 11 matches, the Sunrisers are languishing at the bottom, while KKR, in fourth place with 10 points from 12 matches, still have hopes of qualifying for the knock-out stage.

SRH have won just one match out of the four they played since the resumption of the IPL in the UAE. While they returned to winning ways after five losses on the trot with a convincing victory over Rajasthan Royals, they lost their last game to Chennai Super Kings by six wickets at Sharjah.

The victory enabled Chennai Super Kings seal a place in the play-offs.

The Sunrisers dropped their 2016 IPL-winning skipper David Warner after axing him from captaincy, but that couldn’t change the fate of the team as Kane Williamson hasn’t been able to revive the fortunes of the Orange Army.

Batting remains the Sunrisers’ weakest link, especially in the absence of Jonny Bairstow.

While English opener Jason Roy sizzled on his debut with a quickfire 60 and Williamson too scored a 51 in their successful chase of 165 against Rajasthan Royals, both came a cropper against Chennai Super Kings in their last game.

Wriddhiman Shah held the innings together with a 46-ball 44 but SRH could not accelerate in the death overs and only managed 37 runs in the last five overs against CSK.

Their India players, Priyam Garg, Abhishek Sharma and Abdul Samsad, will have to step up if SRH are to salvage some pride and end the season on a positive note.

Leg-spinner Rashid Khan remains SRH's biggest weapon against any opposition, but he did not have enough runs to play with most times. 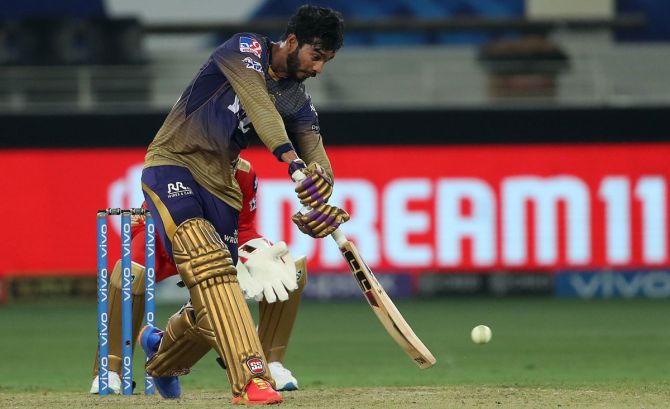 IMAGE: Venkatesh Iyer is KKR's star performer with the bat in the second leg with 193 runs from five matches, including two fifties. Photograph: BCCI

For KKR, the UAE leg of the IPL has been a topsy-turvy affair as they have won three games, while losing two so far.

The two-time former champions impressed with their performance in the second half, and even their two defeats were narrow, where they lost in the last over.

Venkatesh Iyer is KKR's star performer with the bat in the second leg, while Rahul Tripathi has scored the maximum runs for the team this season.

The decision to move Nitish Rana up the order has also paid dividends but Shubman Gill hasn’t been able to capitalise on the starts.

In bowling, Varun Chakravarthy has been their go-to man as he picked up six wickets in the second leg, while Sunil Narine too has been among the wickets.

But they have concerns in the pace department, with Andre Russell and Lockie Ferguson missing games following injuries, forcing skipper Eoin Morgan to make changes.

Even the KKR captain needs to get some runs under his belt.

Tim Southee and Shivam Mavi is KKR’s new pace bowling pair and they will need to step up.

Pacer Prasidh Krishna did well to snap four wickets in the matches that he had played, before being dropped after conceding 22 runs in the 19th over, against CSK. 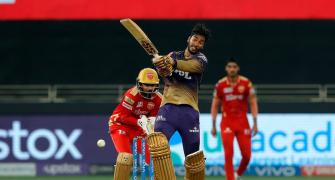 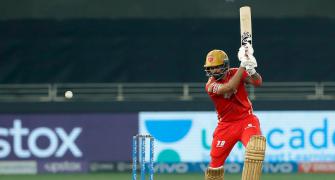 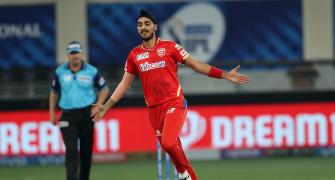 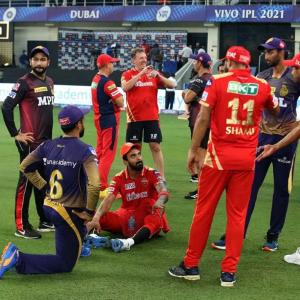 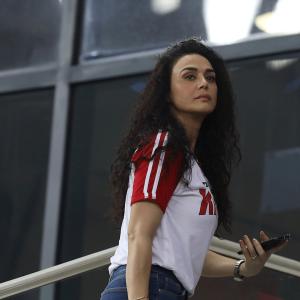