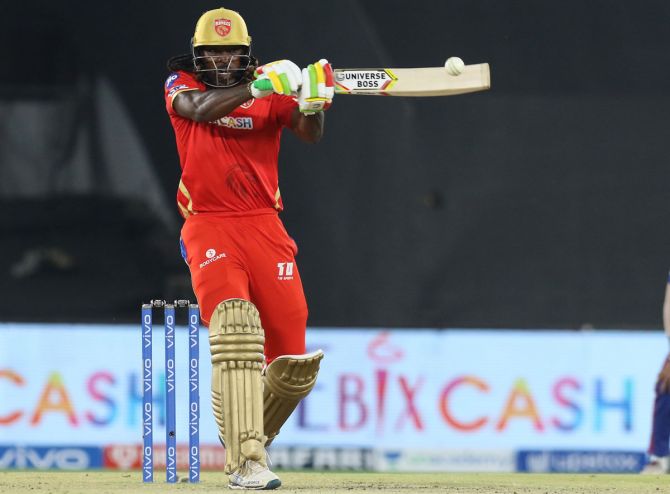 IMAGE: Punjab Kings might draft Chris Gayle as the opener in place of KL Rahul, who will undergo surgery to treat acute appendicitis. Photograph: BCCI

Punjab Kings' stand-in captain Mayank Agarwal says they have not yet discussed if explosive Chris Gayle or Dawid Malan would open the innings alongside him in the absence of KL Rahul, who will undergo surgery to treat acute appendicitis.

Regular skipper Rahul is doubtful to rejoin the league anytime soon even as his team is expecting him to return to action within a week or 10 days after going under the knife in a Mumbai hospital.

Since the IPL is being held in a bio-secure bubble, there is a quarantine period that Rahul may have to serve if he does not get exemption. It may rule him out of the entire tournament, that will conclude on May 30.

"That's something (Gayle or Malan) we have to to speak about but for the moment this is the strategy that we went with and we got a decent score. Maybe probably 10 runs short," said Agarwal after Punjab lost to Delhi Capitals on Sunday.

Agarwal hit a majestic unbeaten 99 but his opening partner Prabhsimran Singh contributed only 15.

Gayle (13) and Malan (26) batted at number three and four respectively as Punjab lost the match by seven wickets after making 166/6.

Agarwal was again non-committal when asked if overseas players can be reshuffled to let someone like Moises Henriques play regularly.

"That's something we will think about, going ahead. With Delhi's batting, we needed firepower to get the wickets, that was lacking. We back our bowlers to do that for us," he said.

Agarwal said it was not tough to play the captain's role but admitted that the responsibility does change the approach towards the game.

"I had been kept in loop. Through the season we were there in meetings. There was enough time to prepare. We turned up decently, would have liked more aggression though.

"When you play as a batsman, you don't think like a captain, you execute your role as a player. When you are captain and batting , you want to take extra responsibility," he said.

Delhi Capitals' Shimron Hetmyer said helpful environment in the dressing room inspires all to do well and that has been a factor for the team's good show.

"That plays a part. It always helps when you go in, with a clear mind and coach is backing you. Most times it comes out positively for us," he said.

He also emphasised on the supporting role being played by head coach Ricky Ponting.

"(There is) positivity. (He) gives you freedom to express, backs you. Keeps pushing you to do your best. I like him."

The West Indian left-hander said he is comfortable in the Delhi Capitals set-up.

"This year it's like being comfortable in environment. You can be yourself. I was nervous first year, last year was not getting much chance."

Hetmyer said it is not that challenging for players to play at two different venues.

"Players should be able to adjust, assess situation, conditions and play accordingly," he said.

Asked about his learning so far from the IPL that may help him in his national duty, Hetmyer said, "I am trying to be more consistent, keep that positivity. In West Indies team, I bat a bit higher, I try to play less shots."