Will BCCI elect Srinivasan as its ICC representative? 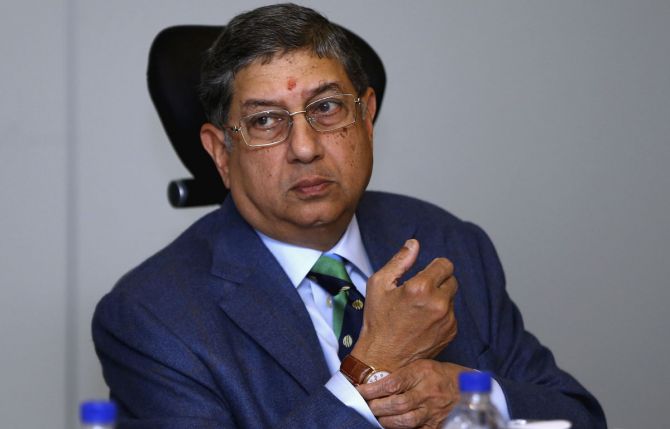 IMAGE: It was former BCCI chief Narayanswami Srinivasan, the tough negotiator, who had made India powerhouse at the ICC Board Meetings during his tenure as chairman. Photograph: Francois Nel/Getty Images

Sourav Ganguly and Jay Shah have got the mandate to continue for another three years in the BCCI but it is former president Narayanswami Srinivasan who has been at the centre of attention following Supreme Court's decision to allow modifications relating to the age-cap of 70 years for representation to the International Cricket Council.

The Supreme Court on Wednesday paved the way for its president Ganguly and secretary Shah to continue in office without having to serve the mandatory cooling-off period.

A bench of Justices DY Chandrachud and Hima Kohli said that an office bearer can have a continuous tenure of 12 years which includes six years in state association and six years in BCCI before the cooling-off period of three years comes into effect.

While the lifting of cooling-off period will allow the office-bearers to continue, there is a strong buzz in BCCI circles that there could be an election in the offing.

"In BCCI, things can change on the floor of AGM. Till nomination papers are filed and scrutiny is done, you never know. It is too early to say what will happen post AGM. Yes, the current office bearers have got the mandate and everyone knew Lodha recommendations were flawed," a senior BCCI official said.

So, will the office bearers be the same or will there be change post the annual general meeting?

While both Ganguly and Shah refused to offer any comments on the Supreme Court verdict, those tracking the developments said some changes in hierarchy can't be ruled out, but in which form or shape isn't clear.

Some of the questions that are doing the rounds include: Will we see Ganguly continue in BCCI as its president? Or will we see him in the ICC? Will Shah be elevated by the members of the BCCI as president? Or will the decision makers allow a promotion for Congressman Rajeev Shukla (MPs who are not ministers are allowed)?

These are some of the questions that will be answered in due course of time. The answers will also dictate Srinivasan's fate.

It was Srinivasan, the tough negotiator, who had made India powerhouse at the ICC Board Meetings during his tenure as chairman. The concept of 'Big Three' (India, Australia, England) getting the chunk of ICC revenue was mooted by Srinivasan but it didn't actually take shape after he left office.

The Lodha recommendations did end his hopes of returning to global limelight but the Supreme Court green-lighting the amendment of age-cap and Solicitor General Tushar Mehta's argument in front of the bench where he spoke about how these "old people" have more networking and negotiation powers has raised his hopes.

The ICC will have a new chairman in November, provided current incumbent, New Zealander Gregor Barclay refuses extension which he is entitled to.

It is no secret that BCCI president Ganguly could have been a strong contender for the ICC top job before the rule change. A person filing nomination for chairmanship now needs to be either an ex-chairman/president or attend at least one ICC Board Meeting.

But, Pawar has no chance as of now and neither at this age will he be aspiring to again go to ICC headquarters in Dubai.

But, what will be secretary Shah's final call on Srinivasan's elevation? Or, are there more surprises in store?

"Why do you forget that Brijesh Patel within next couple of months will end his IPL chairmanship tenure as he is turning 70? Brijesh is a very able administrator. Also, while Supreme Court has allowed 70-plus people to represent India at ICC meetings but where is it written that it has to be above 70? What if BCCI decides on Ganguly? Let's wait and watch," the source said.