Former India captain and coach Kumble is the favourite for the job, even as VVS Laxman remains in contention, once Ravi Shastri's term ends after the T20 World Cup. 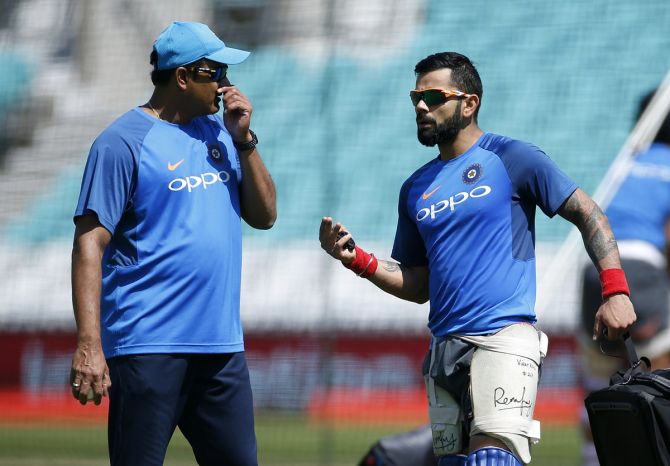 IMAGE: India's coach Anil Kumble and Virat Kohli during a nets session at The Oval during the tour of England in June 2017. Photograph: Paul Childs/Reuters

Life could come to a full circle for Anil Kumble.

The Sourav Ganguly-headed Board of Control for Cricket in India is likely to ask the legendary spinner to apply for the post of Head coach of the Indian team, along with VVS Laxman, once Ravi Shastri finishes his term after the T20 World Cup.

Kumble was the coach of the Indian team for a year, between 2016-17, when the Cricket Advisory Committee, headed by Sachin Tendulkar, Laxman and Ganguly appointed him.

However, a bitter fall-out with captain Virat Kohli led to Kumble tendering his resignation after the Champions Trophy final defeat to Pakistan.

Along with Kumble, the BCCI may also approach Laxman, who was mentor of IPL side Sunrisers Hyderabad for some years now.

However, Kumble is the favourite for the job even as Laxman remains in contention.

"Anil Kumble's exit needs course correction. The manner in which the CoA succumbed to the pressure of Kohli and removed him wasn't the best example set. However, it also depends on whether Kumble or Laxman are ready to apply for the job," a senior BCCI source, privy to development, said on condition of anonymity.

Kohli has already announced that he will quit as T20 captain after the World Cup.

For the BCCI brass, a reputed Indian coach is always priority and both Kumble and Laxman, with their stature in Indian cricket with 100-plus Test matches along with coaching experience, fit the bill perfectly.

A foreign coach is second option.

"The criteria for BCCI's coach's job will be such that only a select few with very good record as player as well as experience of coaching/mentorship can apply for the top job," the source said.

Asked if Vikram Rathour is in contention, the official replied: "He can apply if he wishes to but he doesn't have the stature to become a head coach of the Indian cricket team.

"He is at best an assistant coach. However, when we select the new coach, he will have a team all by himself. So let's wait and watch."