Why Ranji Trophy must have complete DRS

'I don't want to talk about it as the match is on. All gadgets are not there in DRS. The technology should be used fully.' 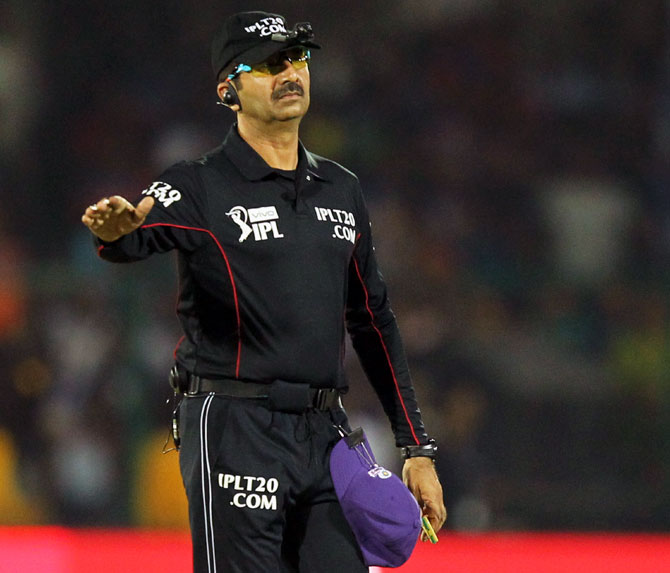 Saurashtra head coach Karsan Ghavri says the use of limited DRS hasn’t served its purpose in the Ranji Trophy final, and going forward, the Board of Control for Cricket in India must make use of the full technology.

The DRS was the talking point once again on Day 4 after Saurashtra skipper and lead pacer Jaydev Unadkat was at the receiving end on two occasions.

In the first instance, which took place in the third over of the day, Bengal wicketkeeper batsman Wriddhiman Saha was adjudged out by the on-field umpire but, on referral, third umpire S Ravi gave him not out.

The ball shaped back in sharply and Saha appeared to be plumb in front.

The second instance came late and this time the ball seemed to be crashing the stumps but the on-field umpire did not give it out. Replays showed only half of the ball was in line of the impact, therefore, the third umpire stayed with the on-field umpire's call.

"I don't want to talk about it as the match is on. All gadgets are not there in DRS. The technology should be used fully," Ghavri said.

Ball tracking technology, which is a major component of the DRS, is not being used by the BCCI for the Ranji Trophy. The Board introduced the limited version of DRS from the semi-finals with an aim to reduce the number of umpiring howlers.

Snickometer is also not available for the title clash.

Bengal staged a valiant fight back in the final session through Anustup Majumdar and Arnab Nandi. The visitors, who have four wickets in hand, need 72 runs to take the title-winning first innings lead on Day 5.

"We gave a few extra runs behind the stumps, possibly 25 runs were given a way just like that (in the final session). The bowlers were also tired towards the end of the day. It is going to be an interesting day tomorrow," said Ghavri, adding the wicket has become easier to bat on.

Bengal coach Arun Lal hailed the effort of his players.

"We decided in the morning that we will not play to win, we will play to win each other's hearts. The result will come on its own," he said.

Besides Majumdar, Sudip Chatterjee and Saha made crucial contributions.

"Sudip was  superb. I was counting on him to get a big hundred. That did not happen. But is it not easy out there. The pitch is all roughed up. I told Anustup, you have to become invincible (tujhe amar ho jaana hain)."

"And look at Wriddhi. He has had no match practice. He is an India player. There is pressure on him to do the job for us. He has been injured and played his first game of the season. He wanted to play his shots but curbed himself. We are still in it," Lal added.