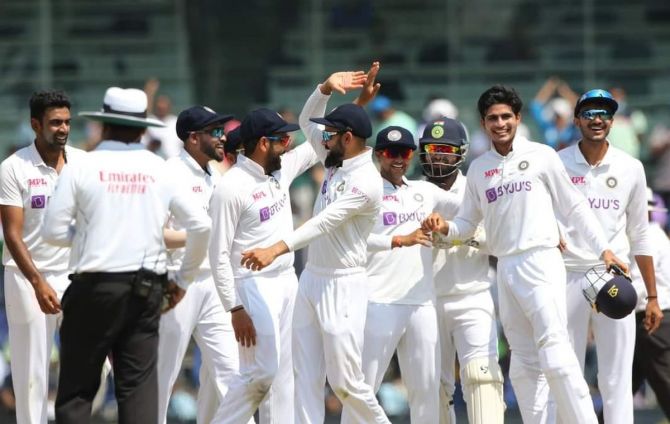 IMAGE: 'As a team, we have certain goals as a batting and bowling unit, we will stick to them. The next two Tests are very important for us, we will like to stick to our game plans.' Photograph: BCCI

India batsman Cheteshwar Pujara on Saturday said that the pitch used for the second Test at Chennai was not at all "dangerous" and it was just a matter of the wicket offering some turn.

The four-match series currently stands level at 1-1 and now both teams will lock horns in a pink-ball Test, beginning February 24 at the Motera Stadium in Ahmedabad.

The second Test pitch led to some sort of criticism from former players like Michael Vaughan and Mark Waugh and the duo termed the pitch as "substandard".

"Sometimes you know when you are playing on a turning track, you find it difficult but at the same time, it was not a dangerous pitch at all. When the ball spins, people find it difficult to score runs, especially the overseas teams.

“When we go overseas and we play on seaming tracks, the game finishes in three or four days. We still have to play on such wickets where there is a lot of grass or seam movement," said Pujara replying to query from ANI during a virtual press conference on Saturday.

"On turning tracks, one cannot define how much the ball can spin. It is a very thin line in that way. I do not think it was a bad pitch. It always becomes difficult in the second innings, this is how it is. When we play in Australia, there are cracks on day four and five, it is a little dangerous, the oddball hits the crack and it might take off. As a team I do not think we had any issues, once opposition teams start playing more on these pitches, they will be fine," he added.

Asked about the pitch for the upcoming day-night Test, he said it is an important game to qualify for the finals of the World Test Championship.

India do not have a lot of experience with the pink-ball, having played just two games.

"We are not sure how much the ball is going to swing around for this particular Test," Pujara said in a virtual media interaction after the first net session.

"Early on it might swing a bit, but maybe going forward as the match progresses, it might not be a lot of swing but we never know with the pink ball it's very difficult to predict."

Pujara said the pitch looked a decent one to him but "a lot could change with three-four days left for the Test".

"It's a different ball game with the red ball. With the pink ball, it's very difficult to judge or assess anything before the match begins because sometimes you're expecting something but it turns out something else with a pink ball.

"I would just try to keep things very simple as a player, and not worry too much about the pitch," Pujara said.

"We have played just one day-night game in India and it was with the SG ball. Domestic games which I have played were with the kookaburra ball. To be honest, it is difficult to predict whether you can keep the grass cover. It is an important game for us to qualify for the finals of the World Test Championship, we will try to focus on the game," he said.

"I've played so many Test matches but with pink ball I also don't have enough experience. I don't think experience matters a lot when you are playing just one-off game in a Test series with the pink ball," he said.

Showering praise on the massive Motera Stadium, Pujara said: "It is a new stadium and pitch. Once we play more games here, we will get to know about the pitch. It is a beautiful stadium, we all are enjoying it here. We had a gym session yesterday and we had a net session today. I played in Ahmedabad in 2012, I have fond memories of playing against England here. We are looking forward to this Test.”

India beat England by 317-run win to win the second Test of the ongoing four-match series to level it 1-1.

The victory in Chennai on Tuesday has lifted India to the second position with 69.7 percentage points on the points table but they cannot afford to lose another match as they need to win 2-1 or 3-1 to qualify for the final of the maiden edition of the championship.

England, who led the table after winning the opening Test, has slipped to the fourth spot with 67.0 percentage points. They can still qualify, but for that, they must win both remaining matches of the series against India.