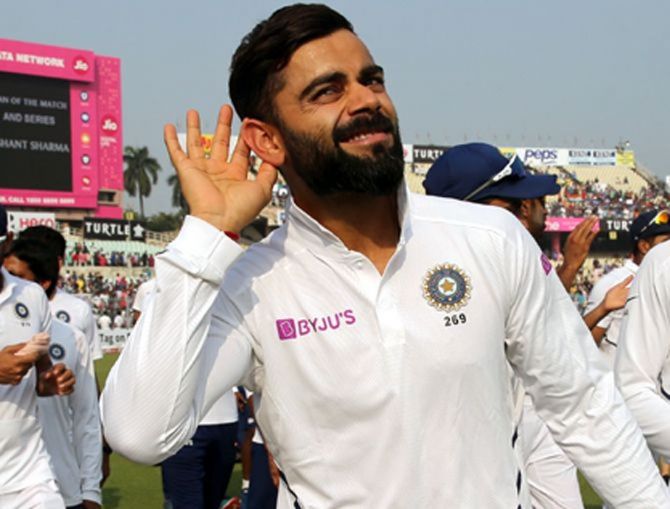 A year after it hosted a non-cricket event -- the Namaste Trump jamboree -- the refurbished Motera Stadium in Ahmedabad will host the real thing -- a cricket match between India and its oldest opponent in the game: England.

It will be the first international men's cricket game at the venue since 2014.

The world's biggest cricket stadium can seat 110,000 spectators, but the capacity for the third Test between India and England, starting on Wednesday, has been trimmed to 55,000 over concerns over the recent spike in COVID-19 cases.

Virat Kohli is only pleased to have the crowds in the stadium.

'Who doesn't love the crowd? We are happy to have the support of #TeamIndia fans and it shall be no different at Motera Stadium', BCCI tweeted along with a clip of the skipper's interview.

'Crowds play a massive role. They really get behind us, the difference of which we saw in the second Test. The opposition does feel the pressure,' Kohli -- who encouraged spectators at the M A Chidambaram stadium in Chennai to 'whistle podu during the Test -- said.

India won the first pink ball Test played in this country against Bangladesh at the Eden Gardens in Kolkata in November 2019, by an innings and 46 runs.

The pink ball Test in Ahmedabad against England may not be such an easy ride, given the class of the English fast bowling.

But with 55,000 Indians yelling their lungs out for Kohli and his men, the Indians will be confident of crowd support at the Motera for sure.