'We are very hopeful that the India-Pakistan series will happen in the UAE. We are geared up for that.'

Waleed Bukhatir and Mazhar Khan, the men who drive cricket in the Emirates, tell Harish Kotian/Rediff.com what the game is missing by India and Pakistan not playing at the Sharjah Cricket Stadium. 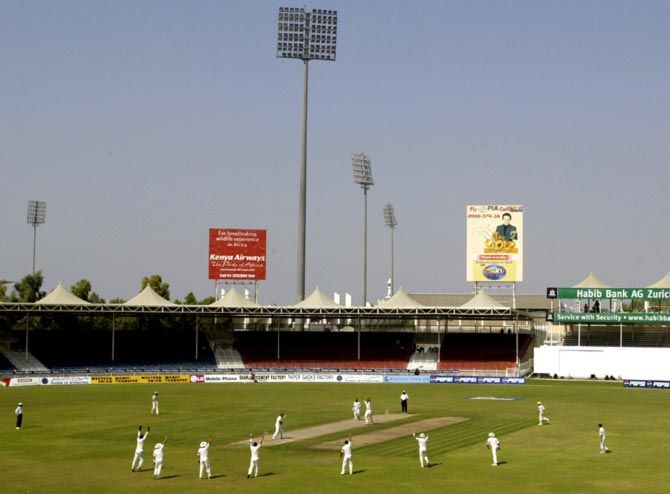 IMAGE: A view of the action during the third Test between Pakistan and Australia in Sharjah, October 21, 2002. Photograph: Hamish Blair/Getty Images

The Sharjah Cricket Stadium was a popular destination for India and Pakistan teams in the 1980s and 1990s.

In the last 15 years, the venue has not only been deprived of India-Pakistan contests, but has not staged a match involving the Indian team since 2000 due to various reasons.

Hope did arise when Pakistan decided to host its 'home' series against India in the United Arab Emirates later this year, but the proposed fixture has run into trouble following a spate of terror attacks in India.

The Board of Control for Cricket in India has asked the Modi government to decide on the India-Pakistan series, which seems unlikely in the prevailing climate of hostility between the two nations.

Sharjah has hosted a record 218 One-Day Internationals, of which India featured in 72, winning 35 of them, while Pakistan played 119 games at the venue, winning 79.

Abdul Rahman Bukhatir, who is credited with building the Sharjah Cricket Stadium in the early 1980s, is responsible for giving the Gulf nation its first taste of cricket. An exhibition game between a Hanif Mohammad XI and Sunil Gavaskar XI was the first match played at the venue.

Around 7,000 people were in attendance for that game in temporary, scaffolding-built stands, remembers Mazhar Khan, secretary, Sharjah Cricket Council, who witnessed the encounter. Bukhatir's son, Waleed, who is now in charge of the Sharjah stadium, is hopeful of bringing the glory days back to the venue with international matches between top teams, though foremost on his list is an India-Pakistan series.

"India versus Pakistan matches are one of the best one can watch," Waleed Bukhatir told Rediff.com on the sidelines of the UAE Exchange Media Ashes between the Sports Journalists Association of Mumbai and UAE Journalists in Sharjah last week.

Bukhatir, who is the vice-chairman of the Sharjah Cricket Council and executive member of the Emirates Cricket Board, says, "We are very hopeful that the India-Pakistan series will happen. We are geared up for that and very excited to host them in December."

He believes that the UAE, which has three international stadiums, including ones in Abu Dhabi and Dubai, should be given a chance to host a multi-nation tournament like the World T20 or the 50-overs World Cup.

"In the United Arab Emirates we have one of the best facilities. The platforms are already in place to host events like the T20 World Cup or the World Cup. We hosted ICC qualifying events; it was very successful. The stadiums already cater to host a large number of spectators. We have the expertise to handle such tournaments; we have got the infrastructure for that," Bukhatir said. "We hope one day we get a chance to host the T20 World Cup and the World Cup."

"There are so many matches played around the world, but India versus Pakistan matches give you a special feeling. It is bigger than the Ashes if you ask me," says Mazhar Khan, secretary, Sharjah Cricket Council. 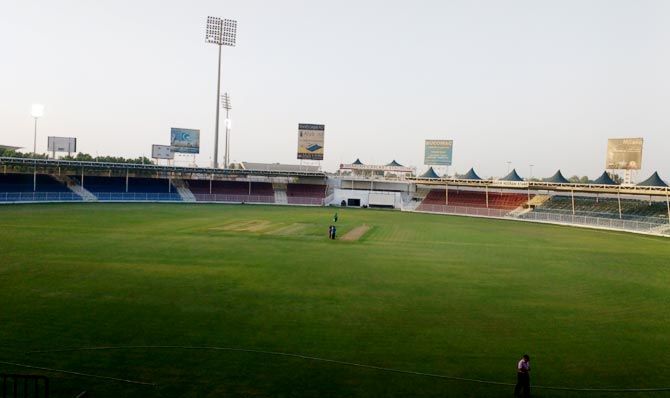 For Bukhatir and Khan, Sachin Tendulkar's 'Desert Storm' innings -- when he hit a thrilling century (143) in the Coca Cola Cup game against Australia in 1998 to guide India to the final -- ranks as the best-ever knock played at the venue.

"I have been coming to the ground as a small kid with my father," recalls Bukhatir. "Tendulkar's innings was one of the best knocks I have seen."

"I was not in the stadium to watch the Javed Miandad innings; the last ball six off Chetan Sharma (the 1986 final of the Australasia Cup), but heard a lot about it. I have seen it on TV; a lot of people still talk about it," adds Bukhatir. "That also looks to be one of the best matches played here."

It is not just India-Pakistan games that Sharjah's cricket administrators are focusing on. They want to host other international teams and bring world cricket back to the Middle East. However, the cramped international schedule is proving a dampener to their aspirations as teams rarely play outside the Future Tours Programme.

"The teams are very busy and the schedule has become very tight. Of course, we would love them to come and play in Sharjah... all the teams, be it India, Pakistan, Australia, England," says Bukhatir. "We would like to have good teams playing in Sharjah, but all of them are busy. We need to see when is the right time for them to come and play."

The successful staging of the Indian Premier League in the UAE (the first leg of the tournament in 2014), Bukhatir says, helped convince other cricket boards that there is a big fan base for cricket in the Emirates.

"IPL officials informed us that the UAE leg was a huge success. We enjoyed every bit of it. All the matches saw almost full houses; some were extremely full and the grounds were packed. You could not get tickets for some matches," he adds. "We knew the IPL would have a lot of passionate viewers, but it surpassed our expectations."

Khan says there are no plans to raise the seating capacity from 27,000 spectators at the Sharjah stadium.

"We are still a small stadium," he says. "The best part about the stadium is that the fans are close to the boundary and to the action in the middle."

"We don't want to change much at this stadium. We don't want to build big stands, Mr (Abdul Rahman) Bukhatir won't like it. He would like to maintain the way it is because it is a heritage," says Khan.

"We are holding onto the Guinness Book of World Records with 218 ODIs hosted at this venue; the second is maybe Sydney (151 ODIs), but we are much ahead of them."

Should India play Pakistan in the UAE?