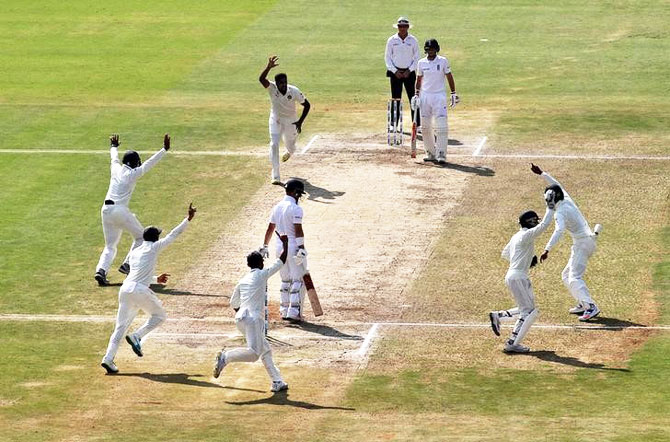 England openers Alastair Cook and Haseeb Hameed made India's bowlers toil without success for 50 overs on Sunday but their lack of intent to score runs made the team's survival even more difficult, the hosts' captain Virat Kohli said.

Chasing an improbable 405 to win the second Test, Cook and Hameed added 75 for the first wicket but both fell before the close on day four.

The touring side were all out for 158 shortly after lunch on the fifth and final day to lose by 246 runs, all 10 of their second-innings wickets going down for 83 runs.

"We thought they are going to come out with more intent, to be very honest," Kohli told reporters on Monday after his side went 1-0 up in the five-match series.

"And to see the approach they had obviously gave us assurance that once we get a couple of wickets, it's going to crumble very quickly." Batting fourth after losing the toss was always going to be a difficult task for England with the wicket offering vicious turn and uneven bounce at a venue hosting its first Test.

Kohli was adjudged the man of the match for his 167 in India's first innings and 81 in the second.

"There wasn't much intent from the (England) batters and on that kind of wicket, the question you asked about my batting, the plan was to have intent," he said.

"Only if you have intent then you can defend the ball properly because you are looking to play it with the bat. If you do not have intent... then obviously if it (the ball) does something then you are in no position to control it.

"If you are looking for runs you defend better as well because your head is on the ball. It's a pretty basic thing to do to be honest.... and if you don't, it's very difficult in the fourth innings to play out four and half sessions." IMAGE: Jayant Yadav of India celebrates after dismissing Ben Stokes of England in the second Test in Vizag. Photograph: BCCI

Kohli said the performance of his pace bowlers Mohammed Shami and Umesh Yadav, who gave India crucial breakthroughs, and debutant off-spinner Jayant Yadav were the biggest positives for his side.

The 26-year-old Jayant, who replaced leg-spinner Amit Mishra, picked up four wickets in the match and played two important knocks of 35 and an unbeaten 27.

"To start of like that, one wicket in the first innings, three in the second, brilliant with the bat, showed great character," Kohli said at the presentation ceremony.

"Stuck it out in the end as well, Shami and him added about 45 for the last wicket. It's always priceless, those contributions."

© Copyright 2020 Reuters Limited. All rights reserved. Republication or redistribution of Reuters content, including by framing or similar means, is expressly prohibited without the prior written consent of Reuters. Reuters shall not be liable for any errors or delays in the content, or for any actions taken in reliance thereon.
Related News: Virat Kohli, Jayant Yadav, Mohammed Shami, IMAGE, England
SHARE THIS STORYCOMMENT
Print this article 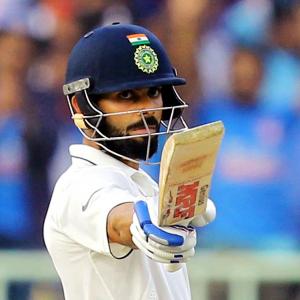