Why national selector was removed from Bengal dressing room 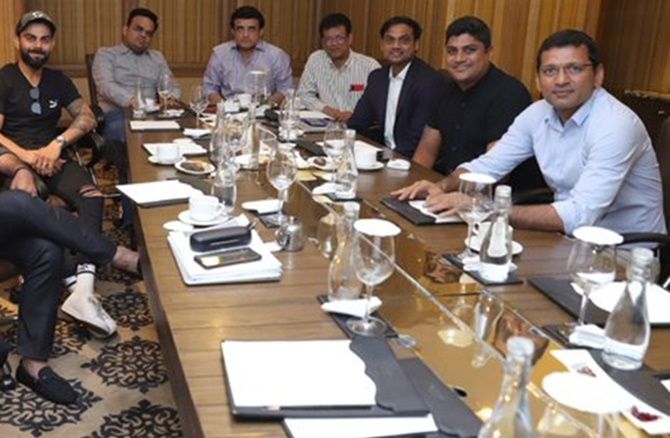 IMAGE: Devang Gandhi said he did take permission from the anti-corruption officer before entering the dressing room. Photograph: BCCI/Twitter

National selector Devang Gandhi was on Thursday asked to leave the Bangal Ranji team dressing room on the insistence of senior batsman Manoj Tiwary for his 'unauthorised' entry but the state association categorically denied any breach of anti-corruption protocol.

It eventually turned out to be an unnecessary controversy, which Gandhi said has hurt the entire Bengal cricket fraternity.

The incident happened when the second day's play was held up due to bad light and Gandhi entered the dressing room, looking for team physio.

"We have to follow what is contained in the anti-corruption protocol. A national selector cannot get in the dressing room without authorisation. Only the players and officials who have their mug-shots at the entrance can get access in the dressing room," Tiwary told reporters.

Gandhi though said he did take permission from the anti-corruption officer before entering the dressing room.

"I had absolutely followed each and every protocol. I was invited by Bengal coach Arun Lal to the dressing room. He was my first captain. I had a back issue, so I took permission and asked the Bengal physio to come to the medical room. But Manoj seemed to have issues with it," Gandhi said.

The East zone selector said Tiwary, who has played under him in a couple of Ranji seasons, did something which was uncalled for.

"It's not me but the entire Bengal cricket fraternity is feeling bad about it. I have nothing against Manoj. It is not a great example set (by Tiwary) for youngsters," he added.

As it became embarrassing for Gandhi, the Cricket Association Bengal (CAB) spelled out the sequence of the incident, asserting that Gandhi did not breach any protocol.

"Mr. Devang Gandhi being a national selector, wanted to enter the dressing room area today when the game was not in play. He was allowed to enter the PMOA (Player and match officials area) as a temporary visitor by the ACU Official only after obtaining necessary permission from the Match Referee."

"However, when Gandhi wanted to get some medical treatment done and the same was informed to the ACU Officer, he was instantly asked by the ACU officer to get the same done a the medical room outside the PMOA area in order to maintain the required protocols. Accordingly, Mr. Gandhi moved to the medical room to ensure there is no breach," the statement added.

According to sources, the matter will be reported to BCCI president Sourav Ganguly and Tiwary may be hauled up.

Play was held up twice due to bad light in the first session with a partial solar eclipse as Bengal's first innings folded for 289.