Moeen Ali, the England all-rounder, with a batting strike-rate of 82.1 and an economy rate of 4.2, was tops.

Srinivas Bhogle and Purnendu Maji evaluate Australia, England and India's players in the the tri-series for Rediff.com 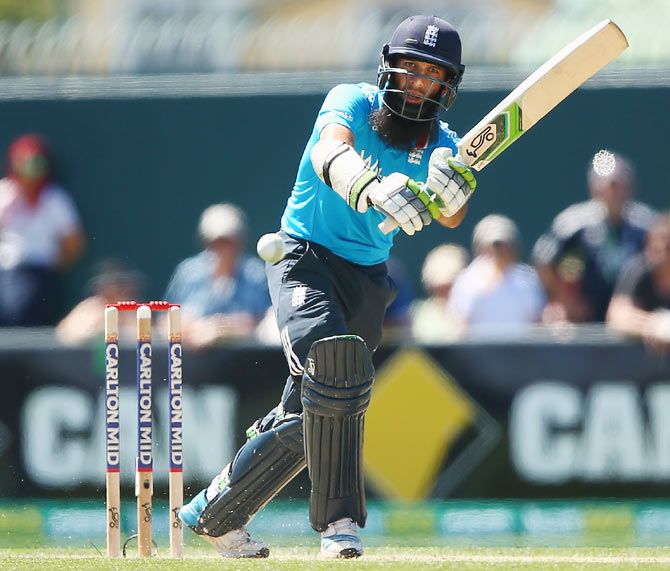 The Carlton Mid ODI Tri-Series was a disaster that the Indians would like to forget quickly. They won nothing and the only time they got some points was when it rained incessantly.

There isn't a single Indian player in the top dozen most valuable players (please see table below). Indeed to find Indian names one must scroll down to the bottom dozen of the table's list.

Moeen Ali (MVPI of 337) was the most valuable player of the Tri-Series with his opening partner Ian Bell (325) just below him; Moeen is increasingly looking like a bowling all-rounder, and among the best in the business right now.

Looking at the table it looks as though India has no wicket-taking bowlers, a solitary batsman who can score runs if fit, and no winners.

Something has to change if the defending World Cup champions want to avoid an early ignominious quarter-final departure.

The Most Valuable Player Index (MVPI) picks out batsmen who score a lot of runs at a high strike rate, and bowlers who take a lot of wickets at a low economy rate.

MVPI must be seen as an indicator of a player's overall batting + bowling + fielding performance, expressed in terms of a 'run equivalent.'

We will regularly publish the MVP tables as the World Cup gets under way, and it would be interesting to speculate who might be this World Cup's most valuable player.

In 2011 it was Tillakaratne Dilshan, with Shahid Afridi and Yuvraj Singh just behind him.

In 2007 it was Matthew Hayden followed by Scott Styris and Sanath Jayasuriya.

Table: Most valuable players in the Carlton Mid ODI Tri-Series (January 16 to February 1, 2015)

Srinivas Bhogle and Purnendu Maji, for Rediff.com in Bengaluru