The skipper is one win away from equalling an Indian record. 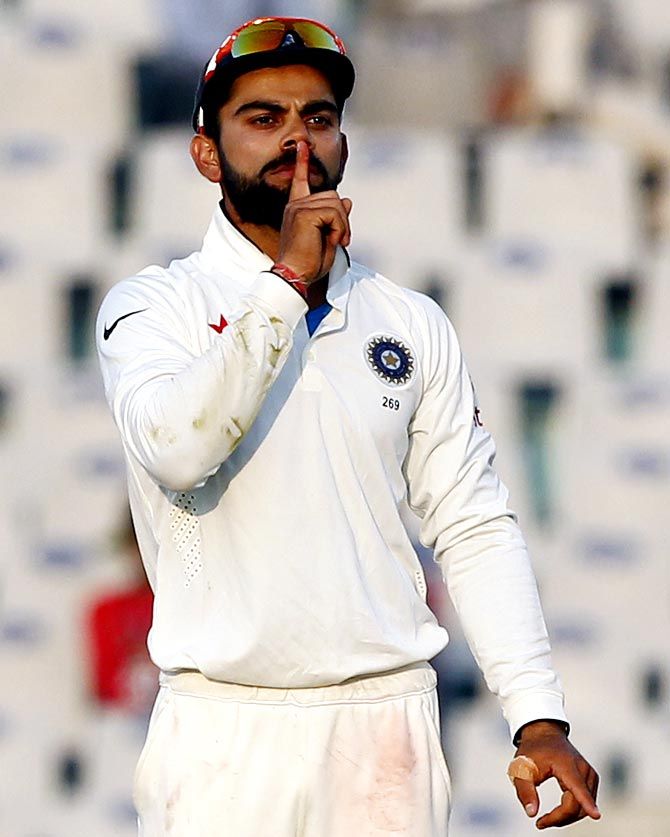 Ravindra Jadeja and Ravichandran Ashwin's superb all-round show helped India crush England by 8 wickets in 4 days to go 2-0 up in the five Test series in Mohali.

India stretched its unbeaten run in Tests to 16 matches, starting from August last year and are just one short of the all-time Indian record of 17 between 1985 and 1987.

Playing his first Test in 8 years, Parthiv Patel smashed an unbeaten 67 off 54 balls as the hosts chased down the 103 run victory target for the loss of Murali Vijay and Cheteshwar Pujara, at the Punjab Cricket Association stadium.

Jadeja scored a career best 90 and picked up 4 wickets in the match.

Statistical highlights from Day 4 of the third Test:

India, under Mahendra Singh Dhoni's captaincy, had similar figures in his first 20 Tests.

India's win-loss record of 7-1 at this venue is the third best by any team at any venue during the last 20 years.

4 For the first time, India have won 4 successive Tests at Mohali -- between 2010 and 2016 -- 2 against Australia and 1 each against South Africa and England.

3 England have lost 3 Tests out of 4 played at this venue (drawn one).

5 For the 5th time, India have won two or more successive Tests against England.

67 Parthiv Patel's unbeaten 67 is his second highest score in Tests, next only to the 69 against Pakistan at Rawalpindi in April 2004.

5 Overall, Patel has scored 5 50s in Tests -- 2 each against Pakistan and Australia and 1 against England.

0 Murali Vijay posted his second duck versus England -- his 5th in Tests.

Apart from his 2 ducks against England, he registered 1 duck each against the West Indies, Australia and Sri Lanka.

Vijay recorded a duck for the first time in 21 Tests on Indian soil.

4 Jadeja was adjudged Man of the Match for the 4th time in Tests -- 1 each against England, New Zealand, South Africa and Australia.

2 Root, with 2 catches in India's second innings on November 29, became the first England fielder to take 25 catches or more in a calendar year in 15 Tests.

Root's tally is the highest by any fielder in Tests in 2016.