News
Business
Movies
Sports
Cricket
Get Ahead
Money Tips
Shopping
Sign in  |  Create a Rediffmail account
Rediff.com  » Cricket » What Delhi must do to keep their play-off hopes alive

What Delhi must do to keep their play-off hopes alive

Mathematically, Daredevils are in the fray but they will have to win all their remaining matches and hope for favourable results from other games 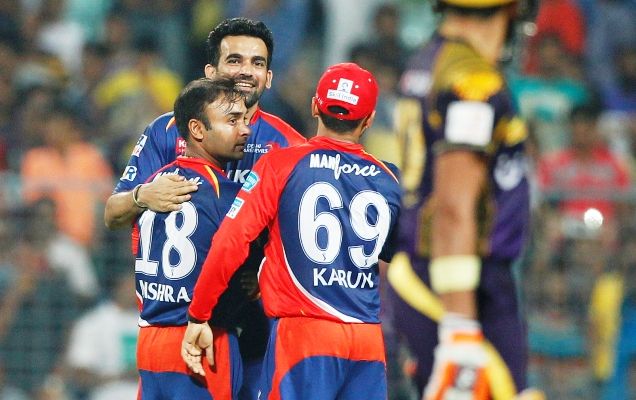 Their losing streak finally over, an inconsistent Delhi Daredevils would look to continue the new-found momentum against a struggling Gujarat Lions in New Delhi on Thursday and keep their slim Indian Premier League play-off hopes alive.

As has been the case in the past editions, it has not been a good campaign for Rahul Dravid's men in the tournament so far.

They slumped to a five-match losing streak to languish at the bottom half of the table before managing to pull off a win on Tuesday night against Sunrisers Hyderabad.

The win not only lifted Daredevils to sixth position in the standings but also gave them a ray of hope to qualify for the play-offs, although for that to happen, they cannot afford to flounder even once from here on.

Mathematically, Daredevils are in the fray but they will have to win all their remaining matches and hope for favourable results from other games.

Daredevils' much-criticised batting came to the team's rescue against Hyderabad after its relatively young bowling attack came a cropper.

Each and every Delhi batsman, who got a chance, contributed in the win.

Openers Karun Nair (39) and Sanju Samson (24), Rishabh Pant (34), Shreyas Iyer (33), Corey Anderson (41 not out) and Chris Morris (15 not out) all pitched in to save the day and Daredevils would be hoping for a repeat show on Thursday.

But it is Daredevils' bowling which would be a cause of concern for Dravid.

In the absence of an injured Zaheer Khan, Delhi's pace attack looked listless with the likes of Kagiso Rabada, Morris and Mohammad Shami going for runs.

If not for the spin duo of Amit Mishra and Jayant Yadav, who managed to put brakes on the scoring, Sunrisers would have piled up an above 200-run score.

Gujarat Lions, on the other hand, are all but out of the race as they are struggling at the second last position in the eight-team tournament with just six points from 10 games.

Having finished an impressive third in their inaugural season last year, it turned out to be a disappointing campaign for the Lions in 2017. Only a miracle from here on might see them qualify for the knock-out stages.
Gujarat Lions are a batting heavy side with the likes of Brendon McCullum, Ishan Kishan, Aaron Finch, skipper Suresh Raina, Dwayne Smith and Dinesh Karthik in the line-up. But more often than not, it is their inexperienced bowling unit which has cost the side dearly in the ongoing IPL.

The Lions are coming into the match following consecutive losses, which includes the heartbreaking defeat against Mumbai Indians in a thrilling Super Over finish at Rajkot, which more or less demolished their chances.

With nothing to lose, the Lions would be eager to show their might in their remaining games in the tournament.