While Virat stamps his authority and his men on the other hand, were unstoppable

The legend of Virat Kohli grew exponentially with his clinical decimation of rivals in a year during which the Indian women's team finally found love and acceptance in the cricket-crazy nation after an emotionally charged World Cup While 'King Kohli' geared up for a watershed next 18 months after nine straight Test series wins, mostly at home, the last six months witnessed Mithali Raj turn from women's cricket team captain into a brand.

Even as they lost a thrilling World Cup final to hosts England, the love and affection, along with deserving financial incentive, made the women's team, the toast of the nation for some time.

The men on the other hand, were simply unstoppable.

Yes, they played most of their games at home but to win ninth straight Test series and eighth in a row in ODIs was no mean feat.

Kohli and his team were also pushed to the limit sometimes, like the defeat in Pune Test against Australia or the first innings collapse on a seaming track against Sri Lanka at the Eden Gardens, but those were few and far between.

In a highly productive year, the undisputed low has to be the comprehensive loss against Pakistan in the final of the Champions Trophy where India went in as the defending champions.

What transpired after that loss would easily fit into the forgettable chapter of Indian cricket's history as the growing rift between Kohli and coach Anil Kumble came out in the open, forcing the latter to resign despite a successful one-year stint.

The entire episode reaffirmed there was only one boss in the Indian team and that was the captain. 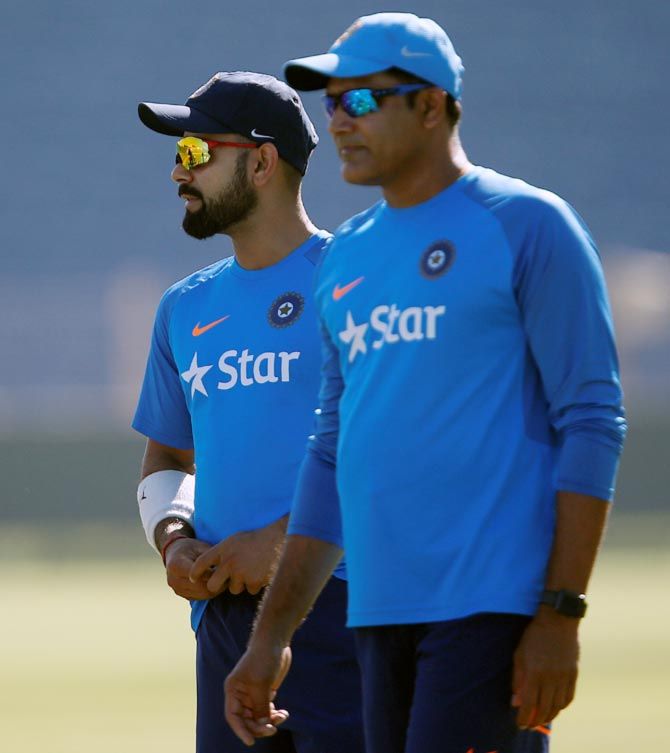 However, the Kohli-Kumble break-up did not affect the team's performance on the field and in no time it was business as usual with dressing room favourite Ravi Shastri coming back to replace the legendary spinner.

Off the field, the Supreme Court appointed Committee of Administrators (COA) ran BCCI starting with four people before it shrunk to two. Ramachandra Guha resigned on an acrimonious note citing his displeasure with the COA's way of functioning.

On the field, the captain too was unaffected and continued to pile up the runs, amassing 11 hundreds across Tests and ODIs including three double hundreds in the five-day format.

Rohit Sharma too had a prolific year after an injury-lay off as he capped the season with a third double hundred in ODIs and the joint-fastest ton during the T20s against Sri Lanka.

The year began with a victory over England but just before the start of the limited overs series came a bombshell, again from the one and only Mahendra Singh Dhoni.

He shocked the entire nation by stepping down from captaincy in the shorter formats, just like he had decided to quit Tests in the middle of the away series against Australia. His heir apparent, Kohli, was handed the captaincy across all three formats.

Kohli's first big test was the four-match home series against Australia. After an expected 333-run hammering in the first match at Pune, India showed commendable character to win the high-intensity series 2-1. 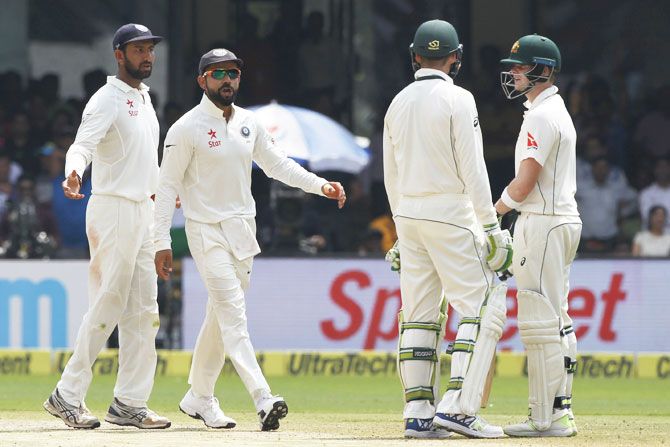 As is usually the case in an India-Australia contest, emotions ran high and one a flare-up took place when when touring captain Steve Smith was accused of 'cheating' by the hosts for signaling the dressing room over a DRS call.

The series also saw an injured Kohli miss the decidingfourth Test in Dharamsala, his first after 54 games. Ajinkya Rahane did well in his absence, leading the team to an eight-wicket win in a high-pressure game with chinaman Kuldeep Yadav making a successful debut.

Then it was the turn of an almost two-month long IPL, after which the team headed to the Champions Trophy in England. Kohli and Co. played well as defending champions before falling flat in the final.

From England, the team travelled to the West Indies, sans Kumble, and expectedly won the limited overs contest. India next dominated a struggling Sri Lanka in their own backyard, winning the full-series 9-0.

Now it was time to return home and play much tougher teams like Australia and New Zealand in the shorter formats. The hosts were tested by both the oppositions but delivered every time they were put under pressure.

Blame it on scheduling, India's final home series of the season was against Sri Lanka, a team they had demolished less than three months ago.

It re-ignited the debate on the overkill of cricket with none other than Kohli leaving to the fans to play a role in scheduling.

It might not be a make or break phase for the already established set of cricketers but it will certainly be the one that defines their legacy, as put by captain Kohli and coach Shastri themselves before leaving for South Africa.

"The conditions will be challenging, but as I've said before, these one-and-a-half years will define Indian cricket- the tours of South Africa, England and Australia. All I can say is that this will be a better Indian team after the next 18 months," said Shastri at the pre-departure press conference.