A full-strength Indian team on Friday underwent a strenuous training session under the watchful eyes of coach Duncan Fletcher ahead of their first Test against the West Indies in Delhi, on Sunday.

All the 15 players, led by captain Mahendra Singh Dhoni, hit the nets at the Feroz Shah Kotla stadium after a light workout at the ground.

- 'The spotlight will be on Tendulkar'

The net session, which lasted for two and a half hours, started around 2:30pm with opening batsmen Virender Sehwag and Gautam Gambhir being the first to take strike.

The duo first faced the local seamers as well as the pace trio of Ishant Sharma, Umesh Yadav and Varun Aaron before taking on the spin trio of Ravichandran Ashwin, Pragyan Ojha and Rahul Sharma. 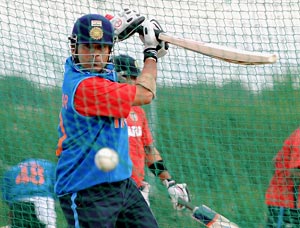 Aaron, who made his India debut in the One-Day Internationals in the just-concluded home series against England, worked up good pace and beat the likes of Sachin Tendulkar and Rahul Dravid a few times.

Ishant, who missed the home ODI series against England due to an injury, was also looking good, bowling at rhythm and at good pace. The senior most trio of Tendulkar, Dravid and VVS Laxman, padded up after the two openers, first facing pacers and then the slow bowlers.

Yuvraj Singh, Virat Kohli and Ajinkya Rahane were the last to bat at the nets. After a long batting stint at the nets, Tendulkar was seen immersed in an animated discussion with Fletcher which lasted for nearly half an hour.

Bowling coach Eric Simmons also joined Tendulkar and Fletcher after some time. Newly-married Gautam Gambhir came out to bat for a second time after some rest while Kohli, the last batsman to hit the nets, was seen taking batting tips from Fletcher.

Towards the close of the net session, Fletcher was seen giving some batting tips to Yuvraj who missed the home ODI series against England.

Yuvraj also rolled his arms to Kohli at the fag end of the net session. Captain Mahendra Singh Dhoni did some catching practice at the ground before joining his team-mates at the nets for a batting session.

Among the bowlers, Ashwin and Ojha batted for some time with Fletcher and Simmons watching closely. Ojha had a long batting session with Simmons bowling at him after most of the specialist batsmen had left the nets.