Swashbuckling opener Virender Sehwag created history on Thursday by scoring the highest-ever ODI score of 219, as a merciless India clinched the ODI series against the West Indies with a convincing 153-run victory in the fourth match in Indore, to take an unssailable 3-1 lead in the five-match series.

The 33-year-old was at his explosive best, as he became only the second batsman, after Sachin Tendulkar, to reach the 200-run landmark in ODIs and propel India to their highest one-day total of 418 for 5.

The hosts then dismissed the West Indians for 265 in 49.2 overs, rendering the fifth match in Chennai, on Sunday, inconsequential.

Debutant spinner Rahul Sharma was the pick of the Indian bowlers, claiming with three wickets for 43 runs.

Electing to bat, it was Sehwag who took centrestage with a stunning exhibition of strokeplay as he plundered runs at will on a belter of a track at the jam-packed Holkar stadium. 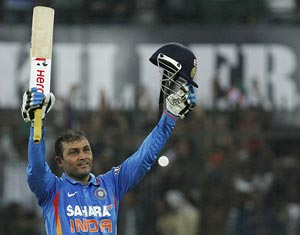 He surpassed Tendulkar's 200 not out, from 147 balls against South Africa in Gwalior on February 24 last year, when he square-cut Andre Russell for a boundary in the 44th over of the Indian innings to go past the 200 mark.

He joined his idol Tendulkar in the record books as the only other cricketer to score a double hundred in the limited-overs game.

The 'Delhi Marauder', who registered his second three-figure knock against the West Indies, and 15th overall, in 240 ODI matches, slammed as many as 25 fours and seven sixes during his 149-ball blitz.

He also reached his double hundred in fewer balls (in 140 with the help of 23 fours and six sixes) than Tendulkar, who took 147 deliveries for his unbeaten 200.

Weighed down by the mammoth total, the inexperienced West Indies batting line-up was never in the running to successfully chase down the total.

Save wicketkeeper-batsman Denesh Ramdin, who took advantage of an attacking field to score a run-a-ball 96, the other West Indies batsmen didn't put up any resistance. In fact, the last-wicket pair of Ramdin and Sunil Narine (27, 33 balls, 3x4, 1x6) added 64 runs in only 10.3 overs to reduce India's margin of victory.

Top-order batsmen Lendl Simmons (36), Marlon Samuels (33) and all-rounder Andre Russell (29) got the starts but could not translate them into big knocks.

Sharma, the find of the IPL, who has been touring with the side for the past two months and was preferred over Irfan Pathan, completely foxed the visiting team after Sehwag's murderous assault had already demoralised them. With his fast leg breaks and top-spinners, the 25-year-old Jalandhar-born bowler mesmerised the clueless Caribbean batsmen and struck three big blows in his first three overs.

Introduced into the attack in the 12th over, he claimed wickets off the last deliveries of that particular over, as well as the 14th and 16th respectively to reduce the Windies to 100 for 5.

Earlier, Sehwag, who is leading the team in the absence of regular skipper Mahendra Singh Dhoni, also became the highest individual scorer in the 40-year-old history of One-day internationals.

Sehwag continued to plunder runs against a hapless Windies attack on a perfect batting strip, having opted to bat, as India raised their highest-ever total against the West Indies in ODIs, overtaking their previous best of 341 for three in Vadodara in January 2007.

Sehwag, who was caught in the deep straight field in the 47th over while attempting another huge heave off Kieron Pollard, also added century stands with fellow-opener Gautam Gambhir and Raina, who both got individual half-centuries and were run-out.

Sehwag got a life twice during his masterly knock -- once on 20, when he escaped a run-out chance after being stranded mid-pitch, and then on 170, when rival captain Darren Sammy dropped an easy catch at extra cover.

When India commenced their innings, the decision of the Indian team management to tweak the top order paid rich dividends as Sehwag and Gambhir, who replaced Parthiv Patel after the latter had opened in the first three games, ripped apart the Windies bowling attack.

Sehwag, who said after the Ahmedabad tie that the top order needs to fire, led from the front by greeting the first ball he received from Sunil Narine and Sammy for big sixes.

Gambhir, who has had a poorer run than Sehwag in the series prior to Thursday, square cut Kemar Roach and steered the fast bowler for two fours in the fifth over to show he too meant business. 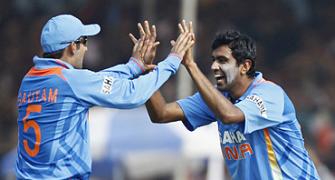 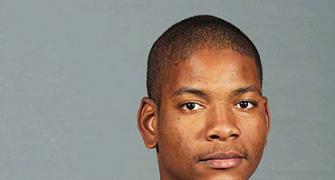 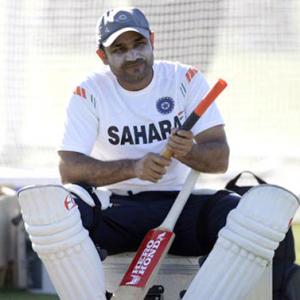 All hail the 'gambler' Sehwag