Left-arm spinner Pragyan Ojha took a wicket in the final over of the day to help India regain advantage against West Indies on day two of the first cricket Test at Ferozshah Kotla on Monday.

Ojha trapped opener Kraigg Brathwaite (2), who had batted so well in the first innings, leg before off the last ball of the first over to ensure the hosts had something to boast about on a day characterised by an abject batting collapse by their batsmen.

Only Virender Sehwag (55) and the ever-dependable Rahul Dravid (54) put up a semblance of a fight as India collapsed from 89 for no loss to 209 all out, giving the visitors a healthy 95-run lead in the first innings.

Captain Darren Sammy was the best West Indies bowler, with figures of three for 35, while Ravi Rampual and Devendra Bishoo picked up two wickets apiece.

The West Indies second innings began on a disastrous note with Ashwin trapping opener Kieron Powell leg before without a run on board.

However, their first innings lead ensured the visitors were 116 runs ahead (on aggregate), with eight second innings wickets left, on what is a fast deteoriating Kotla wicket.

Ojha led the Indian bowlers' charge with a maiden five-wicket haul as West Indies were bundled out for 304.

Openers Gautam Gambhir (22 not out off 18 balls) and Virender Sehwag (15 not out off 13) then managed to negotiate an eventful 25 minutes as India went to lunch at 39 for no loss in five overs.

Gambhir survived a close lbw shout off Ravi Rampaul before Kirk Edwards dropped the left-hander at third slips off Fidel Edwards. And then, Sehwag escaped due to a no-ball by Edwards after the pacer breached through the opener's defence in the fifth over. 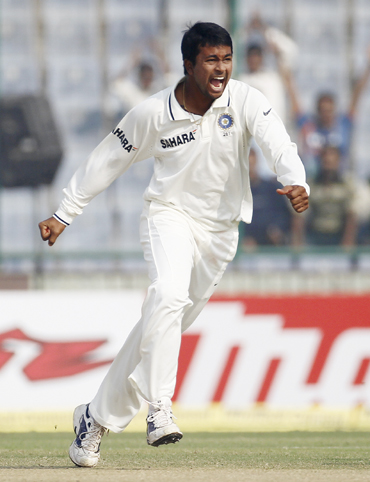 Earlier, continuing from where he had left on Sunday, Ojha picked up three wickets to add to his overnight three and helped his team open the floodgates at the Feroz Shah Kotla.

While Ojha's figures of six for 72 was the primary reason behind the West Indies' slide from an overnight 256 for three, Ravichandran Aswin chipped in with one to finish with figures of three for 81 in 27 overs, creditable enough for a debutant. Between the two, Ojha and Ashwin finished with figures of nine for 153.

Toiling hard on a track bereft of any movement or bounce, pace spearhead Ishant Sharma was rewarded when he found centurion Shivnarine Chanderpaul (118 off 196 balls; 7x4, 2x6) off guard with a sharp incoming delivery.

There were some doubts over the decision made by Kumar Dharmasena, but TV replays showed that the ball would have gone on to the hit middle and leg.

Umesh Yadav, another Indian playing in his first Test, though was a letdown, often straying down the leg. After Chanderpaul's dismissal, however, it was a matter of time before the West Indies innings folded up in 108.2 overs.

Of his team's 442 minutes of batting, the Guyanese consumed 286 of them while facing 196 deliveries.

Introduced in the 99th over in place of Yadav, Ojha struck immediately removing overnight batsman Carlton Baugh with a ball that didn't turn as much as he had expected it to. Baugh's dismissal ended his 69-run partnership for the sixth with Chanderpaul.

After Ojha had Baugh trapped in front, the bowler did a repeat to send back West Indies skipper Darren Sammy with an arm ball that pitched around the middle stump for his maiden five-for in Test cricket. Making his debut against Sri Lanka in 2009, his previous best was four for 107.

Sachin Tendulkar missed out on yet another opportunity to record his 100th international ton as India suffered a dramatic collapse to be 151 for four at tea, giving West Indies a slight edge

Replying to the West Indies' 304 all out, the hosts were placed at 151 for four in their first innings with Rahul Dravid and Yuvraj Singh batting on 18 and 22 respectively.

The four wickets India lost in the second session undid much of the good work Pragyan Ojha did early in the morning with his maiden five-wicket haul, which hastened the West Indies' collapse at the Feroz Shah Kotla stadium.

In reply, India openers Virender Sehwag (55 off 46 balls; 7x4) and Gautam Gambhir (41 off 41; 7x4) provided the early  fireworks with an 89-run partnership in just 12.3 overs, but the latter's dismissal triggered a collapse that saw the hosts lose four wickets for an addition of just 31 runs.

West Indies skipper Darren Sammy got a finger to Sehwag's booming straight drive and the ball went on to hit the stumps on the bowler's end, catching Gambhir well short of the crease.

If luck played a part in Gambhir's dismissal, Sehwag's wicket was bizarre. The batsman's right foot was in the air while he was trying to work the ball around his hip off leg-spinner Devendra Bishoo, and wicketkeeper Carlton Baugh clipped the bails off in no time.

That brought Tendulkar to crease, but Kotla was stunned into silence in a matter of 25 minutes as the champion batsman made his way back to the dressing room after being rapped on the pads by Fidel Edwards.

Credit must go to Sammy, who brought in his most lethal bowler after Tendulkar's arrival. Edwards looked hostile during that spell and returned with measly figures of five for one in five quick overs.

Tendulkar was followed by Laxman who was caught behind off Bishoo -- the most successful of the West Indian bowlers, returning figures of two for 35. 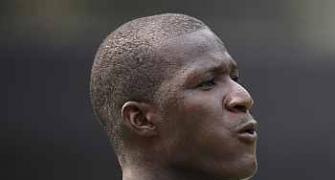 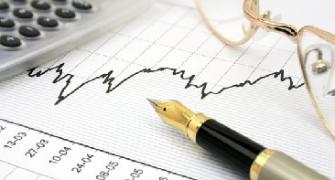 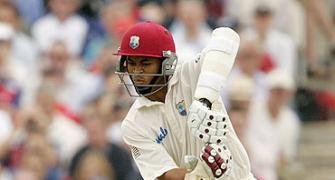