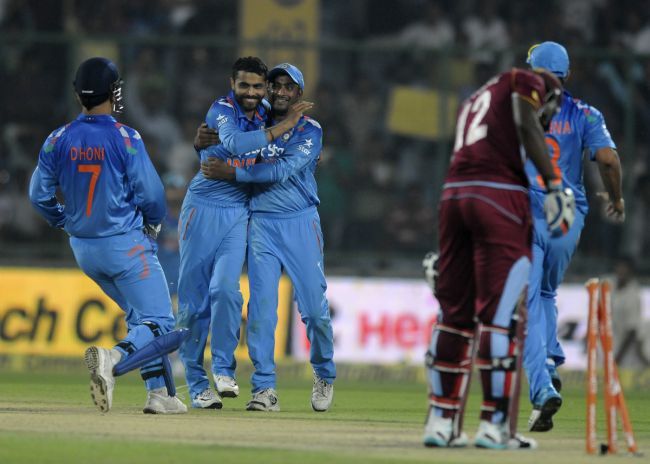 India relied on their bowlers to stage a remarkable recovery and script a 48-run victory in the second One-day international against the West Indies, in Delhi, on Saturday.

The victory enabled the hosts level the series 1-1.

Chasing a 264-run target, the West Indies were cruising at one stage at 170 for two in the 36th over before their innings fell apart on a sluggish Ferozshah Kotla track.

India defended the total despite the West Indies’ early domination, as opener Dwayne Smith hit a career-best 97. However, once Smith was dismissed the Indian bowlers called the shots, causing a batting collapse.

From a comfortable 170 for two, the Caribbeans lost their last eight wickets for just 45 runs and were out for 215 in 46.3 overs. 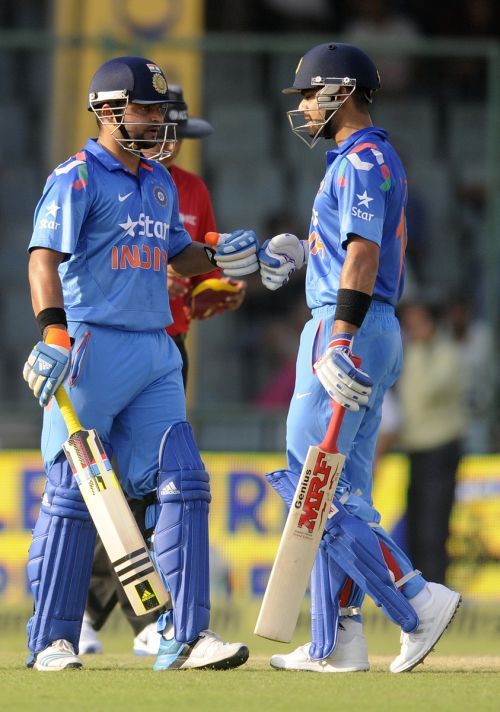 Electing to bat, India posted a competitive 263 for seven, as Suresh Raina hit a sparkling 62 and Virat Kohli (62) returned to form with his first half-century in eight months.

Raina carried his splendid T20 form into the match and Kohli regained lost touch partly at his home ground as the two batsmen added 105 runs for the fourth wicket after a sedate start by the team.

Skipper Mahendra Singh Dhoni contributed in India’s total with an unbeaten 51 off 40 balls while Ambati Rayudu scored 32, batting at number three, a position that Kohli usually bats at.

In his trademark style, Dhoni hit a six and a four off paceman Jerome Taylor to complete his 56th half-century in the last over of the innings. 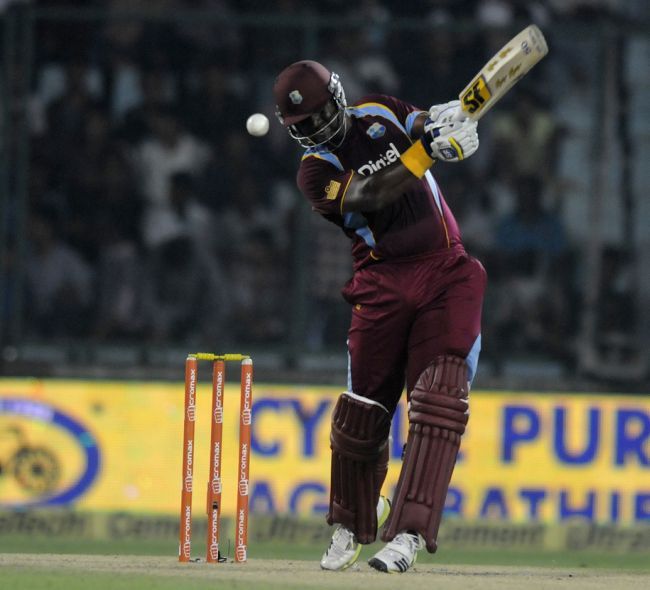 Dwayne Smith hits one out of the park. Photograph: BCCI

West Indies opener Smith missed out on a maiden ODI century by just three runs and his dismissal in the 36th over changed the complexion of the match.

The teams will now travel to Visakhapatnam for the third ODI on Tuesday.

The West Indies looked like taking the game away as the two openers – Smith and Darren Bravo -- settled nicely after getting the measure of the pitch and bowlers. They easily took the team to a comfortable 64 without loss in 13 overs.

Shami brought relief for India when the first ball of the 14th over slightly brushed the stump, took the bail off, and Bravo was forced to start his walk back to pavilion. The left-hander took 44 balls for his 26 but his stand with Smith gave the West Indies an ideal start.

The Windies openers did not exactly set the stage on fire but hardly gave anything to India. The match was on even keel as Bhuvneshwar Kumar, Umesh Yadav and the spinners toiled initially. They did not leak many runs but did not get wickets either. 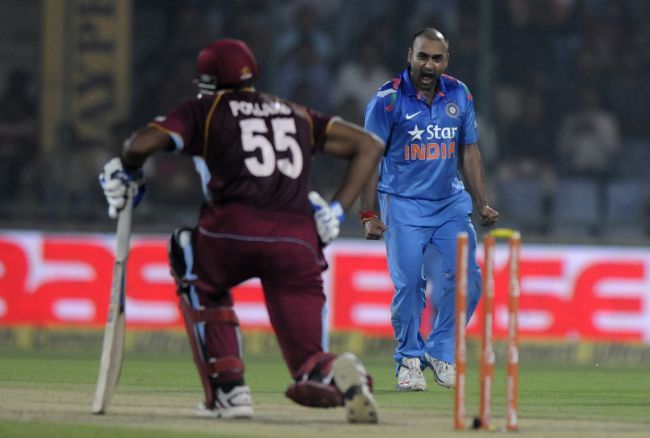 Getting quick runs was tough on the Kotla pitch but Kieron Pollard did not hesitate to swing his arms. The burly batsman clobbered a six off Yadav and also hit Bhuvneshwar for a four, causing anxiety in the rival camp.

Meanwhile, Smith completed his 50 with a single off Amit Mishra and also lofted the leg-spinner for a six over mid-wicket to raise his side’s 100 in the 23rd over. Pollard also creamed a six off Mishra, who was by and large bowling well.

The leg-spinner copped another six from Pollard but had his revenge when he bowled Pollard, who dragged one on to his stumps. However, Pollard, by then, had added 72 runs for the second wicket with Smith.

He scored 40 runs from 50 balls, with three sixes and a four. 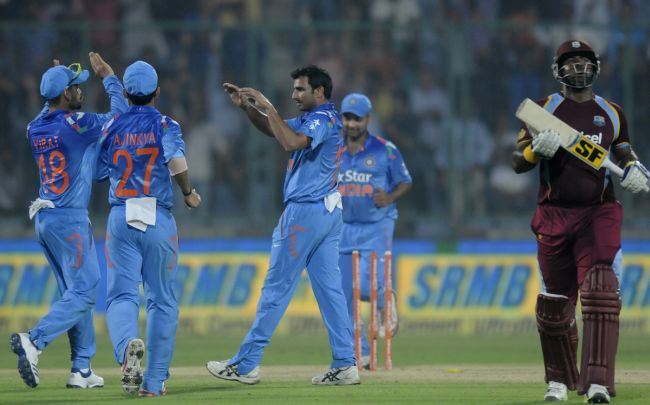 However, he missed his first ODI century as Shami’s delivery went on to disturb the stumps after hitting his pads. He, perhaps, wanted to go past the milestone quickly and missed the ball that came in from off-stump. His 97 had 11 fours and two sixes.

Umesh Yadav scalped Samuels (16) and Mishra got rid of Denesh Ramdin (3) with a turning ball to reduce the visitors to 189 for five.

Jadeja then saw the back of Andre Russell (4) and Darren Sammy (1), ending West Indies hopes of a second win in the series. 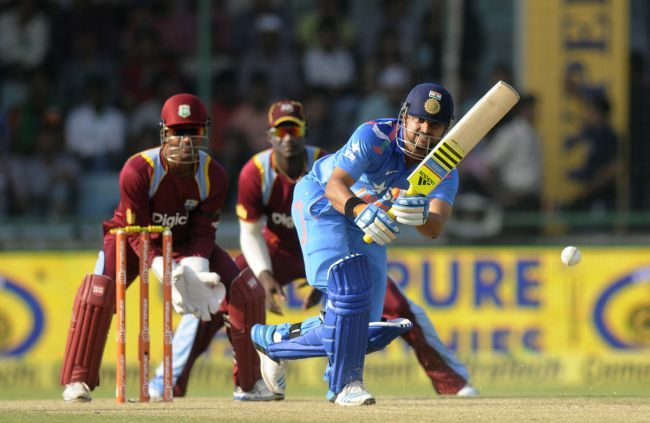 Suresh Raina flicks one to the boundary. Photograph: BCCI

Earlier, Raina batted like an artist at work as he struck the ball elegantly and effortlessly. His drives, late cuts and one inside-out six off paceman Ravi Rampaul were a treat to watch after India elected to bat.

His assuring presence at one end not only pulled India out of a slump but it also gave Kohli a chance to arrest his slide and play freely, without having to worry about the run-rate. Kohli struggled in the entire England tour, where he could score only one fifty and that too in the tour-ending T20 match.

While Raina scored at a good pace, Kohli was patient in his approach, going for singles and hitting an odd boundary in between.

The stand was broken when Raina miscued a shot off Jerome Taylor and the edge flew to Kieron Pollard at mid-off. Raina’s 62 came off 60 balls, with five fours and two sixes.

Kohli's 62-run knock was his first ODI fifty since scoring a century against Bangaldesh in February this year. His knock came off 78 balls and included five shots to the fence. 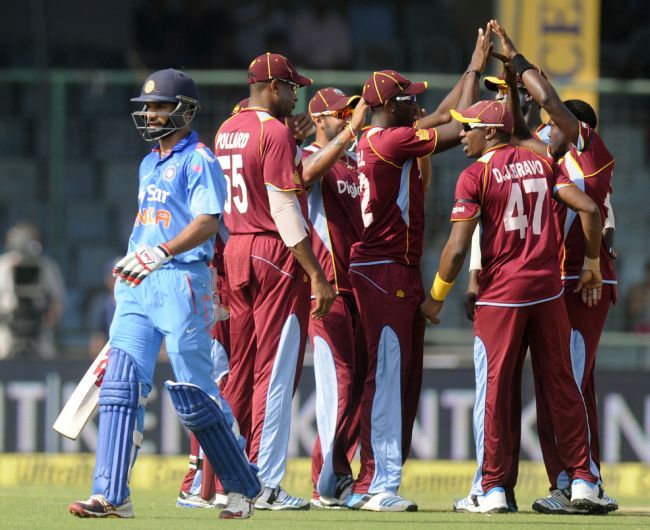 Before the two joined hands, India were struggling at 74 for three inside 20 overs as the visitors strangled the batting with excellent bowling from the pace duo of Rampal and Taylor.

Taylor was the pick of the Windies bowlers, taking three wickets for 54 runs.

At the start, Rampal struggled with his line but generated some good pace, which troubled the Indians. Taylor provided the visitors the breakthrough, going through the gate of Shikhar Dhawan (1), who played across the line, missed completely, and saw his stumps shattered.

Rayudu was sent ahead of Kohli and the Baroda batsmen started off in tremendous fashion with two boundaries off Rampaul. He guided one to third man and then drove the ball elegantly through covers.

However, the Windies bowlers kept the Indians on a tight leash as Rampaul and Taylor bowled well in tandem. Rampaul was excellent with his pace while Taylor was terrific with his line and length. The boundaries were few and far between as the first 10 overs fetched India only 37 runs.

Darren Sammy then dismissed Rahane, who drove straight to Dwayne Bravo at covers. It was a soft dismissal as the slow ball tricked Rahane and he failed to keep it down.