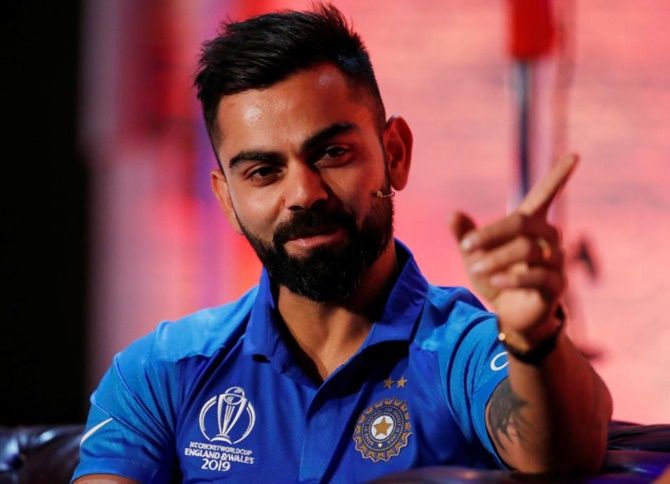 IMAGE: For Kohli winning the World Cup is what matters the most. Photograph: Andrew Boyers/Reuters

Immune to frenzy around every India-Pakistan clash, captain Virat Kohli says staying focussed on the bigger goal was important since the tournament would not end with World Cup's most awaited match on Sunday.

While he is aware of all the hoopla around the match, Kohli won't let one World Cup contest dictate his thought process.

The Indian captain was asked, six to seven times, the same question about the external pressure, hype and how tough this match could be and he very eloquently warded off all the queries, giving away very little.

For the skipper, the bigger picture -- winning the World Cup -- is what matters the most.

"Whether we do well or not tomorrow, it's not going to finish. The tournament still has to go on and focus has to be on larger picture. No one person takes more pressure than the others.

"Eleven guys share the responsibility. The weather is not in anyone's hands. We have to see whatever amount of game we get, we need to be mentally ready to do whatever we need to," the skipper said.

Being in constant limelight has made him very conscious about the electronic media looking for that ticker-grabber and the skipper wasn't in a mood to relent.

When a journalist from the vernacular electronic media asked him about the Virat vs Amir battle, his response was sharp.

"I will not say anything for creating TRPs and neither would I say something that creates an exciting news point. Any bowler I face, I only see the red or white ball. Yes, I respect a bowler's skill set. I had said the same about Kagiso Rabada," Kohli said.

But he did make it clear that the good bowlers need to be studied well.

"Whoever are impact bowlers in world cricket, you should be wary about their strengths but at the same time you should have that much self belief that you can score runs against any bowler. The result of the match will not be decided on mine or his (Amir's) performance alone."

And he doesn't have to prove anything to anyone.

"I don't have to go out there and prove to the world that I have to win some kind of contest. I have never entertained these things till date and won't do it near future. You can even get out to a part timer. I keep things that simple and basic."

He has had some memorable performances against Pakistan but talk about his 183 at Mirpur, he would be quick to point out others contribution.

"If you talk about Mirpur, even Rohit batted very well and we had a lengthy stand. MS (Dhoni) and (Suresh) Raina then finished the game and at the start Sachin paaji (Tendulkar) played a great knock. It wasn't as if I scored 330 out of 340 required. It's good to create an external hoopla but we inside the change room know how to recognise each and every contribution."

He however accepted that it's not fair to expect that fans would be very logical in their thought process.

"I can't tell fans to think in a particular manner. We have a professional approach to the game as we can't get too emotional or over excited. So, mindset of the players will be different from that of fans.

"Our attention span has to be very precise on field. We have that split second to make a decision but from a fans point of view I would say that it's not easy to think like a player."