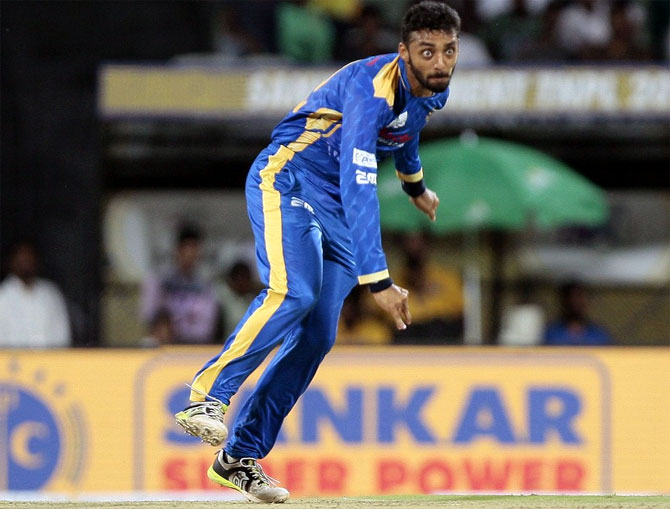 IMAGE: Architect-turned-cricketer Varun Chakravarthy, was brought by Kings XI Punjab for a massive Rs. 8.4 crore last season but only played only one after being sidelined by injury. Photograph: TN Premier League/Twitter

Tamil Nadu mystery spinner Varun Chakravarthy on Thursday said that he did not expect to get picked in the IPL auction and was surprised at Kolkata Knight Riders buying him for Rs 4 crore.

The 28-year-old was an unknown quantity till last year's IPL auction when Kings XI Punjab picked him for an astronomical Rs 8.4 crore.

In Thursday's IPL auction in Kolkata, his base prize was Rs 30 lakh but eventually was sold for Rs 4 crore to Kolkata Knight Riders.

Varun, who played only one match for Kings XI Punjab in the 2019 IPL before being side-lined due to an injury, has been out of action for a long time. He said he had begun to play club cricket.

"I am happy. I didn't expect to get picked at the auction. I must thank Dinesh Karthik and Abhishek Nayar," he said.

Varun broke into the Tamil Nadu 50-over team on the back of impressive performances in the Tamil Nadu Premier League and made his Ranji Trophy debut also last season.

"It is a good opportunity for me. I hope to learn a lot by watching and training with the international stars in the KKR squad," Varun, who is a B. Arch graduate from SRM University in the city, said.

He impressed in the Vijay Hazare Trophy last year, grabbing 22 wickets, which helped him get noticed and brought him under the radar of IPL franchises.

Varun is known to have an ability to bowl a variety of deliveries including the off-break, leg-break, googly, carrom ball and slider, among others.

Meanwhile, young Tamil Nadu spinner M Siddharth, who made his debut for the state in the Ranji Trophy and the Syed Mushtaq Ali Trophy recently, was also picked by KKR for his base price of Rs 20 lakh.

The left-arm spinner said he was delighted to have been picked by KKR.

"I am very happy. I didn't have much expectations. I am looking forward to rubbing shoulders with some of the top international stars and Indian players in the KKR team and learn from them. I think it is a great opportunity for me," Siddharth said.