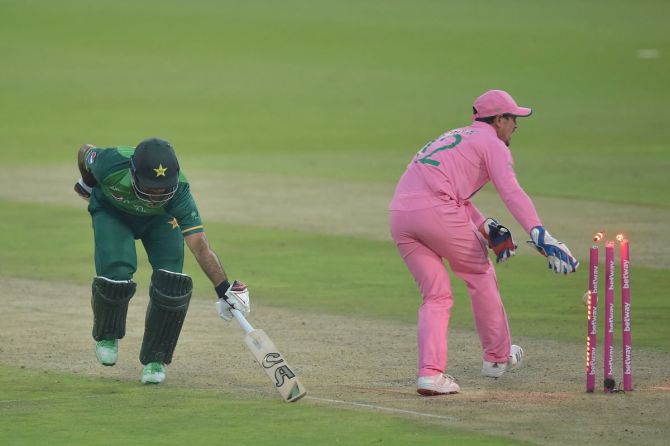 IMAGE: Fakhar Zaman is run-out during the 2nd ODI against South Africa in Johannesburg on Sunday. Photograph: ICC/Twitter

Pakistan's Fakhar Zaman's contentious run-out in the second ODI against South Africa on Sunday has sparked a debate on spirit of the game with Marylebone Cricket Club (MCC) saying it was "up to the umpires to decide" if Quinton de Kock had attempted to mislead the batsman.

In a stiff chase of 342, Zaman smashed a spectacular 193 in a losing cause as the batsman was run out in a controversial fashion involving South Africa wicketkeeper de Kock.

The stumper pointed his finger towards Lungi Ngidi but the ball was, in fact, thrown by Aiden Markram towards the keeper's end and it was a direct hit. Zaman had slowed down his pace at the end of his second run and could not make it back into his crease.

Replays showed that de Kock had seemed to convince Zaman into believing that the throw was going to the non-striker's end.

"Law 41.5.1 states: It is unfair for any fielder wilfully to attempt, by word or action, to distract, deceive or obstruct either batsman after the striker has received the ball," the MCC, custodians of the game, tweeted.

In another, the MCC wrote, "The Law is clear, with the offence being an ATTEMPT to deceive, rather than the batsman actually being deceived. It's up to the umpires to decide if there was such an attempt. If so, then it's Not out, 5 Penalty runs + the 2 they ran, and batsmen choose who faces next ball."

The debate around de Kock's gesture was whether he was intentionally attempting to deceive Zaman into thinking that the throw was headed for the other end, leading to the batsman slowing down his pace while going for the second run at the Wanderers on Sunday.

Many in the Pakistan cricket circles blamed de Kock for "deliberately distracting" Zaman, leading to his dismissal.

"What a master inning by @FakharZaman. Treat to watch. Single handedly brought the game here. Sad end to the inning. Deserved a 200. Was the spirit of the game compromised by South Africa & @QuinnyDeKock69 in that run out?" Akhtar asked in a tweet.

"Record breaking inning. Simply Outstanding @FakharZamanLive. What about this cheeky giggle from Quinton tells you?" Waqar said on Twitter.

Pakistan lost the game by 22 runs as the hosts levelled the three-match series 1-1.

ICC Law 41.5 says: "Deliberate distraction, deception or obstruction of batsman. 41.5.1 in addition to 41.4 states it is unfair for any fielder willfully to attempt, by word or action, to distract, deceive or obstruct either batsman after the striker has received the ball."

However, the Pakistani opener, who achieved the highest score by a batsman in an ODI chase, refused to blame de Kock.

"The fault was mine as I was too busy looking out for Haris Rauf at the other end as I felt he'd started off a little late from his crease, so I thought he was in trouble. The rest is up to the match referee, but I don't think it's Quinton's fault."

"I played a very good innings but it would have been better if we had won the match," Fakhar said after the game.

"You've always got to look for ways especially when things are not going your way, got to find ways to turn momentum around. Quinny did that," Bavuma said.

"I don't think he broke the rules in any kind of way. It was a clever piece of cricket."