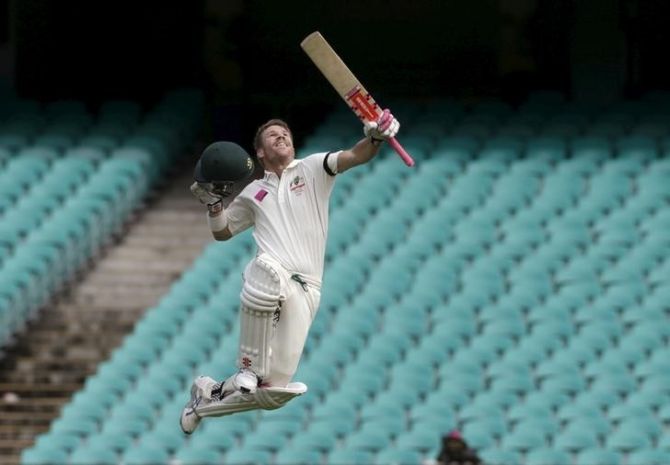 IMAGE: Australian batsman David Warner celebrates scoring a century against the West Indies on the final day of their third Test in Sydney. REUTERS/Jason Reed.

Australia's David Warner breathed life into the rain-ruined final Test with a pulsating ton as the match meandered to a draw against the West Indies on Thursday.

Warner, determined to finish an undistinguished series on a high, reached his 16th Test century off 82 balls before a small Sydney crowd.

The buccaneering opener had a highest score of 64 in the two previous Tests as team-mates helped themselves to six centuries against the tourists' innocuous bowling attack.

Warner was hell-bent on rectifying that inadequacy and attacked the bowling from the first ball to raise his maiden ton against the West Indies.

When the match was called off, Warner was unbeaten on 122 with Peter Nevill on seven and Australia 176 for two in reply to the West Indies' 330.

The match was consigned to a draw after two days were washed out with only 86.2 overs possible before the anti-climatic fifth day.

When play resumed, the West Indies added 82 runs before being dismissed for 330.

Australia and Warner in particular, went after the tourists' total with gusto to entertain the small crowd given free admission into the Sydney Cricket Ground.

Warner provided plenty of entertainment, clubbing spinner Jomel Warrican for two sixes in three balls on the way to plundering 16 runs from one over. IMAGE: The Australian team pose with the Frank Worrell Trophy after winning the series against West Indies on Day 5 of the third Test match at Sydney Cricket Ground in Sydney on Thursday. Photograph: Cameron Spencer/Getty Images

His first six raised his half-century off 42 balls as he dominated the scoring over opening partner Joe Burns.

The pair raised their 100-run stand off 92 balls, with Warner contributing 74 runs.

Burns was out soon after, attempting to hoist Warrican over mid-on only to be taken head-high by Kemar Roach for 26.

Under-used Mitchell Marsh and wicketkeeper Neville were promoted in the order.

Marsh, in only his third bat of the series, was caught at slip for 21 giving spinner Jomel Warrican his fifth wicket of the series and making him his side's leading wicket-taker over the three Tests.

The West Indies earlier reached their highest score of the series before being dismissed at lunch.

It was the first time the West Indies had passed 300 in their last nine Test innings against Australia.