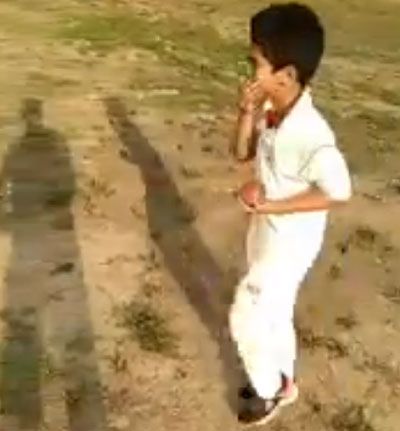 'Easily ball of the century. A googly that turns a metre and a half.'

A seven-year-old boy from Ganderbal district of Jammu and Kashmir has become an internet sensation after receiving applause from spin wizard Shane Warne for his spin bowling at a local cricket match.

In a tweet, Warne praised the bowling skills of the boy – identified as Ahmad, a resident of Ganderbal district in central Kashmir.

"This is outstanding! Well bowled young man," Warne tweeted, ending his tweet with thumbs up smiley.

Warne's response on Twitter came on a tweet by a senior journalist in Kashmir who had posted a video of the boy bowling at a local match earlier this year.

"Easily ball of the century. A googly that turns a metre and a half. @ShaneWarne take a look. You have some competition," journalist, Islah Mufti had tweeted.

"His name is Ahmad. He is 7 year old from Ganderbal district of Kashmir. A prodigy, I guess," Mufti later tweeted in reply to Warne.

After Warne's twitter praise for Ahmad, the young boy became a topic of discussion during Fox Cricket's lunch break broadcast on day two of the Border-Gavaskar Trophy match between Australia and India at Adelaide.