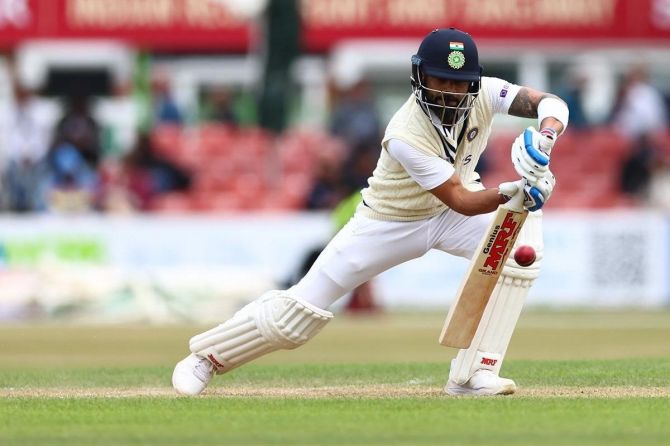 Virat Kohli showed his class, hitting an impressive 67 off 98 balls while Shreyas Iyer (62) and Ravindra Jadeja (56 not out) also got ample batting practice as India finished their second innings on 364 for 7 against Leicestershire on day three of their four-day warm-up match, in Leicester, on Saturday.

Kohli, who has been enduring a prolonged lean patch, decorated his innings with five boundaries and two sixes.

He was ably supported by Iyer, who scored his runs off 89 balls with the help of 11 boundaries, and Jadeja who struck 10 fours during his unbeaten knock.

But Chesteshwar Pujara could only manage 22 of 53 balls with the help of three fours. Pujara batted for both sides. He was out for a duck in Leicestershire's first innings on Friday.

Jadeja was also out for a duck off Navdeep Saini early in the Indian second innings but came back later to bat again as it is just a practice match.

At stumps, Mohammed Siraj (1 not out) was giving Jadeja company.

Pacer Navdeep Saini (3/55), one among the four Indian players to turn out for Leicestershire, shone bright with three wickets for the county side. 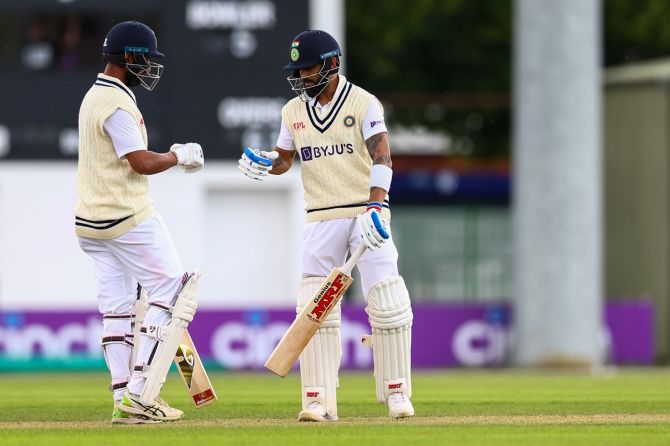 Another Indian player Kamlesh Nagarkoti (2/48) also chipped in with two wickets, while R Sai Kishore (1/55) and Will Davis (1/400) accounted for a wicket each.

The visiting Indians still lead Leicestershire by 366 runs at stumps with a day's play remaining in the match. 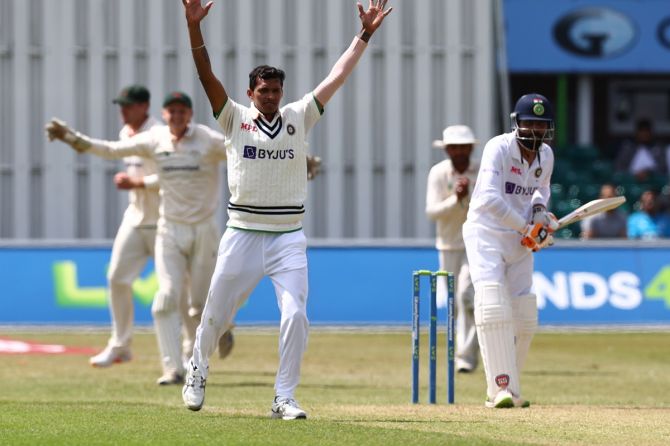 Earlier, Saini, who picked up Shubman Gill's wicket on the second day, dismissed well-set Srikar Bharat (43 off 98) and Jadeja (0) in a span of three deliveries to reduce India to 118 for 4.

But it was Hanuma Vihari (20) who was the first to depart, after adding just 11 runs to his overnight score, off the bowling of Will Davis.

Seventeen runs later, Saini struck twin blows in an over in the form of Bharat and Jadeja.

Nagakoti the accounted for Iyer and Shardul Thakur (28 off 38) in a span of seven overs.

But before being dismissed, Shardul shared 39 runs in the company of Kohli, who came out to bat at an unusual No. 7 position.

Pujara didn't help his cause as he was stumped by Sam Bates off Sai Kishore.

Skipper Rohit Sharma, Mohammed Shami and Umesh Yadav are yet to bat.